I made one block today. These blocks finish at 8" so sew up pretty easily. Perfect to make while dinner is cooking— 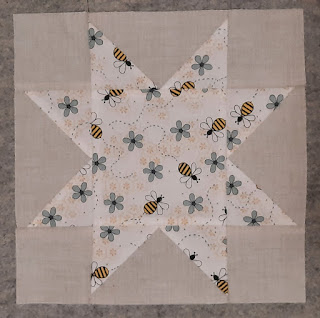 I wasn't sure if this level of contrast would work, but it seems to, so I'm pleased.

Last week the MOML and I had a few nights away - our winter 'holiday'. Just a chance to recharge our batteries before we get busy with calving. That will happen all too soon, and keeps the MOML under the pump until at least Christmas time.
We knew the weather wouldn't be nice but the chance of a few sleep-ins and a change of scenery presented itself so off we went.
As is our habit, we headed up north. Often we like to go to a nice beach or bay somewhere but decided on somewhere a little more populated so that there was plenty to do if we couldn't beachcomb! 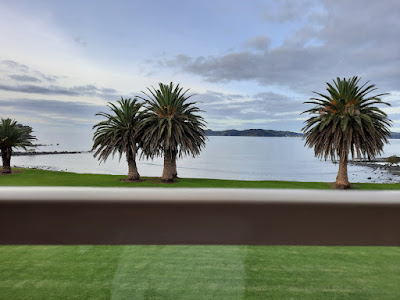 (A grey day at Waitangi)
We stayed at Waitangi which is where New Zealand's Treaty of Waitangi between the Maori people and The Crown was signed in 1840. 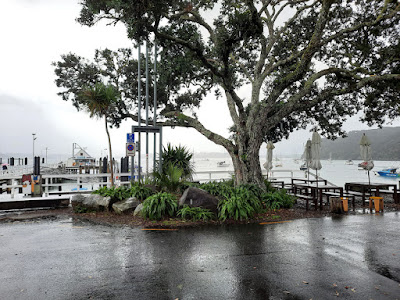 (A grey day at Russell. Waiting for the ferry to take us back to Paihia/Waitangi.)
It's a short ferry ride to Russell which was an early European settlement - well known in the 1830s for its lawlessness and a place where "whaler, seafarers and merchants mixed with adventurers, deserters and escaped convicts from Australia." As well as bullet holes to be found in the church, and amongst other places of interest, there is Pompallier House. This was once the headquarters to the French Catholic Mission to the Western Pacific. We took a tour around its Printing press and tannery, which we found fascinating. Quite a bit of history and some interesting stories hidden within. 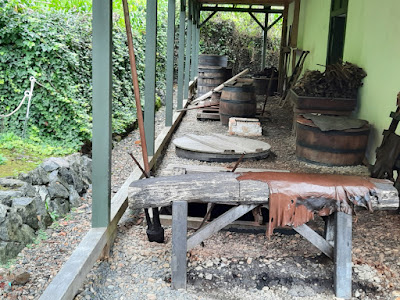 (The tannery outside. As well as leather being needed to cover the books
(all of which were printed in te reo), it was used for shoes and so on.
The raw hides were imported from Australia in the early days. Not one
bit was wasted - fat scraped off the hide was used for glue, candles.)
(I imagine it would have been a very smelly place!)
I was doubly interested to see how the printing press worked after reading about Jamie's one in the Outlander series.....I can now picture the heavy bit of machinery he transported around the countryside and also the 'types he set' (not to mention the ones Marcelli made from their gold bars!).
A lovely NZ Tree Fuchsia in the grounds. I must try growing one of these; I love their flowers. We did a bit of shopping one day (I now have a couple more shoe boxes to keep projects in!)
We visited the Waimate mission, another early European settlement. 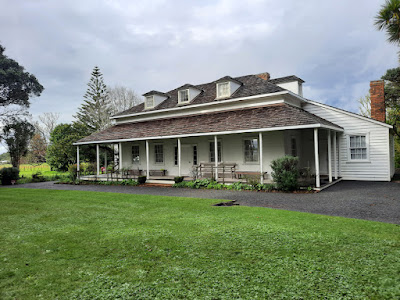 The trees in the grounds were gi-normous. Goodness knows how old this Totara is — 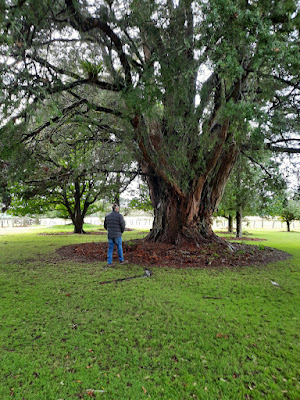 Not long after the above photos I became violently ill after being fed gluten for breakfast (arrgghhh!!!) so I spent the rest of the day in bed while the MOML strolled around the town and had Eccles cakes for lunch.
The day we left the weather brightened up! — 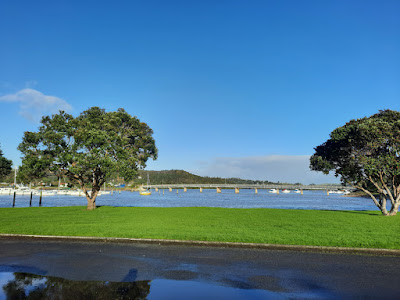 In spite of the illness it was a lovely few days away :-)
'til next time,
happy stitches,

Such a shame you were made poorly. But it looks like a lovely break away.
Your star block is pretty, you've been busy with bees too.

so you have to watch a diet and have to be gluten free - that is too bad - when traveling you must be on the look out for that I assume all the time. The place you visited looks beautiful and so full of history, I love looking at places like that

Very pretty place to visit. Oh no for getting ill while traveling. So many interesting places to see and learn. Cute block.

So sorry to read you have been I'll on your holiday, not nice at all. Russell is an interesting place "the hell hole of the Pacific". Guess its much quieter these days now all the colourful characters have long gone. It's always nice to have a break away, especially for busy farmers!

The bee fabric in that block is just gorgeous! Russell looks like a great place to visit.. maybe one day :) sorry you were not well while you were away, hope you're all better now xx

Lovely fabric in your block…
What shame you were sick while on your winter break.
Lots of interesting places you did get to visit.

Beautiful block Raewyn. So sorry to hear you copped a dose of gluten people do not realise how serious it is to be gluten free for some people. Love that area of NZ so much to see and do. Beautiful old totara.

What a fascinating place to visit. I love all the history involved.
So sorry to hear you got some cross-contamination in your food. That stinks! I haven't had that happen yet when traveling, but I'm sure my day will come!
A block a day, huh? Good for you!

Very nice star. Reading about your trip was very interesting and I am fascinated to learn there is such a thing as a fushia tree! I love fushia's. Always good to have a few days away to recharge batteries. xx

Sounds like you are managing to get to some sewing each day, perhaps I should try that. Hope you are feeling better now, and both are refreshed ready for the busy times.

I am pleased you managed to get away but am so sorry to hear that you had to miss a day like that. Such shame. Hope you are back on track now.

So sorry you got sick! Gluten is an issue in our house too. It's very hard to go out to eat, it takes a lot of trust. Hope you are all better. :-)