After a bit of yummy nourishment I settled down for a nice Friday evening sewing along with friends... thank you to Wendy for hosting us for our monthly Friday Night Sew In :-)
I decided to have a change from my usual evening stitching and finish a 'quilt'. 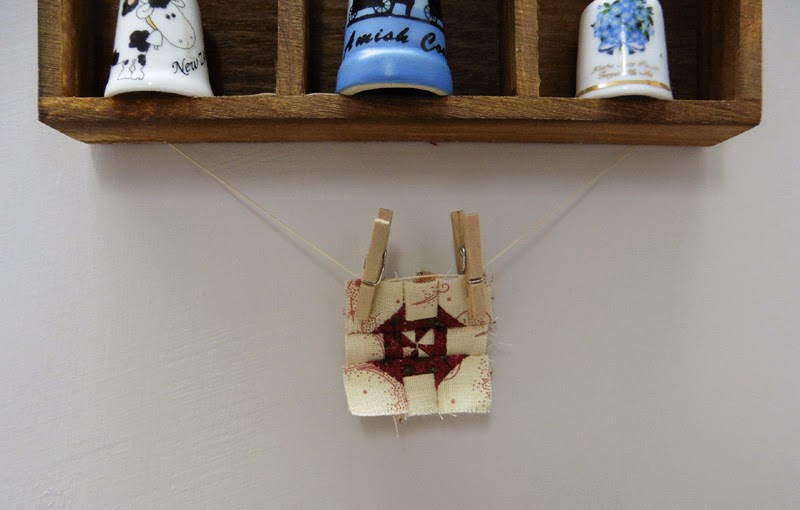 You may recognise the above wee block from a few posts ago, when I challenged myself to sew SMALL. It has hung below my thimbles since then, glaring at me, and daring me to bind it and turn it into a finished item.
So... some batting....

There was a bit of stitching time left in the evening so I carried on with another of my alphabet letters from the Country At Heart booklet.
So you can see I enjoyed my evening :-) To see what every one else was working on, visit Wendy's blog *here* ... there's been plenty of productivity going on.

In my last post I shared a few snippets of some secret sewing...I'm happy to say that some of them are in the post, winging their way to their new home, as part of Chooky's Secret Christmas Swap...great to get that done, all very exciting!!!!!
And here it is, the end of the weekend for us here in New Zealand. Today has been spectacularly warm so I'm off outside to water the garden.
Thank you for visiting, and happy creating,

A finish and a weekend away

Not a quilted piece but something for the bed all the same!
A few years ago I fell in love with the ripple afghans I was seeing around blogland. I started collecting yarn for one and LESS THAN A YEAR AGO started making it.
This has been a project I have really enjoyed. It became a perfect project to work on while travelling when I discovered that I could work on it in the car without getting motion sickness!! 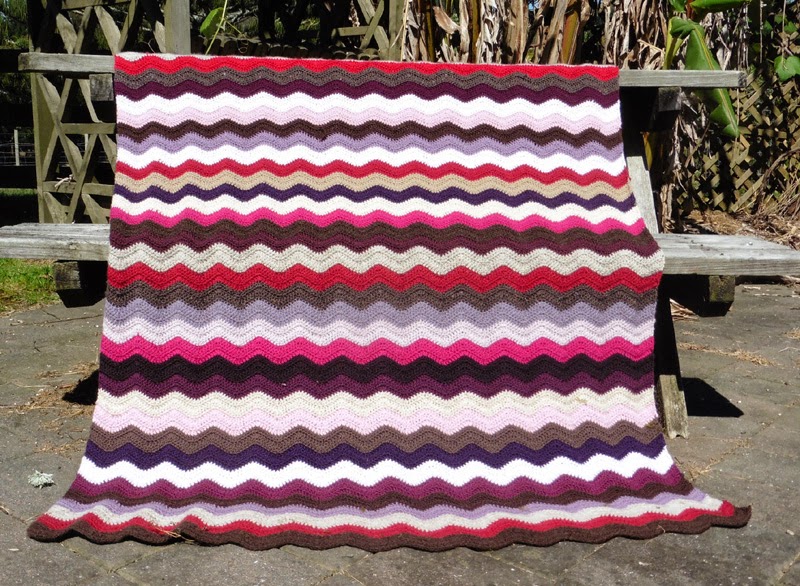 It has wonderful memories of a visit to Australia with Mum to see my son and his wife. It brings back memories of my whirlwind trip to America to visit Spring Market. It's travelled within and around Northland. It's been in and out of town on a Friday night with hubby to get takeaways and groceries. I collected the yarn while travelling up and down the island to my parents' when Dad was ill. Stopping and buying the odd skein was a nice break on the frequent trips I was making. 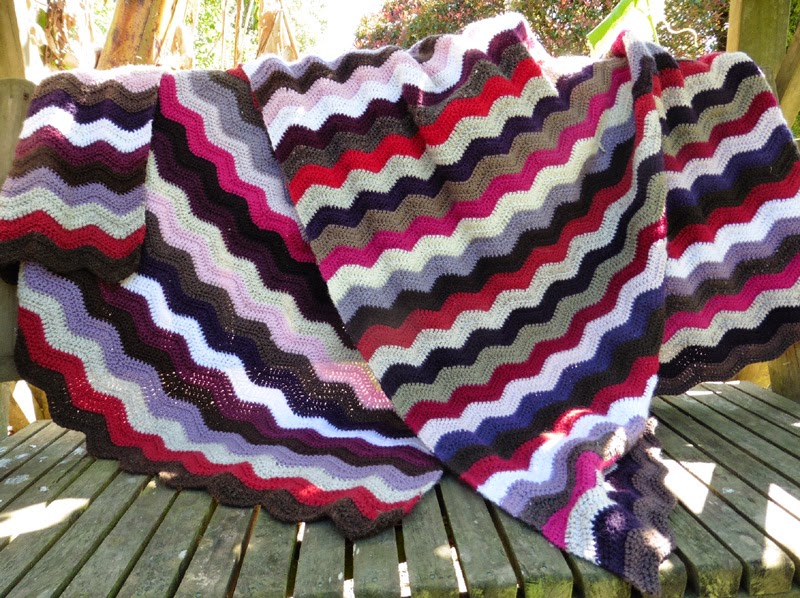 I wanted it single bed size, not necessarily for tucking in, just laying on top, and also a nice size for snuggling in. And it's 100% wool, making it so warm. I'm a natural fibres kind of girl.
I followed the pattern I found *here* It is a straight forward design, making it a pleasureable journey.
The last trip my afghan made was this past weekend when DH and I had some time away to attend the wedding of a neighbour's daughter. I wanted to finish it on a brown stripe as I had started it on brown... which meant there would be either 57 stripes or 61, depending on how much I got done while away. 57 it was!
And a little more about the weekend. DH doesn't get away very often - he's pretty tied to the cows - but now that calving is over, attending the wedding was a good excuse to book a milker and disappear.
The wedding we attended in the Bay of Islands was lovely. The weather was gorgeous all weekend and it felt like we were just tipping over into summer.
My blog has been a little quiet lately as I've been working on several secret projects and there's been very little to share. Here are a few sneaky peeks..... 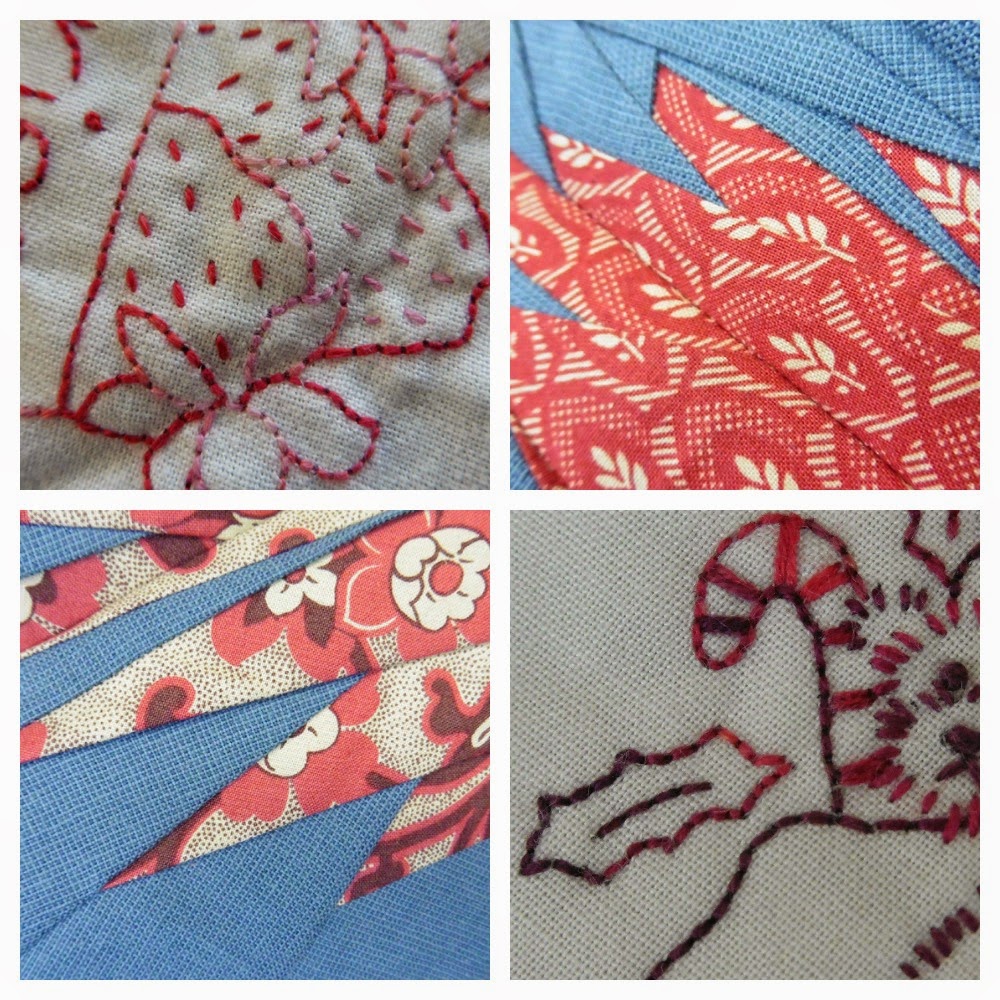 And now it's time to get back to those secret projects...although  my sewing machine is away getting serviced so I'll be doing lots of prep work. And it's far too warm for having the afghan out so that needs to be stowed away safely until the winter.
Until next time, happy creating and thank you for visiting,