what have I been up to? 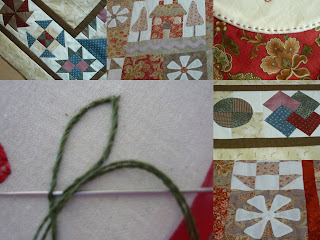 It's hard to believe it's been over a week since I last posted, especially since I have often had a needle and thread (or foot pedal) in my hands this last week. I've been helping with a few shop samples for my favourite little quilt shop lately..helping to get ready for the annual New Year's Launch. Lots of team work with one of us needleturning, someone else stitching, someone else piecing, quilting, binding and so  on ---all on the same project (but not at once!!).
You can see from the photo that I have been doing some needleturn applique (that's a Gail Pan quilt)(see more of it here), and I just thought I would mention it as I saw a brilliant tutorial for the method I LOVE over at Marjorie's Applique Addict blog - be sure to read both posts of the tutorial or it wont make sense. This method takes all the fiddling out of needleturn applique - I have waxed lyrical over it before but you cant mention a good thing too many times, can you!!

This weekend, I have had the chance to make a Christmas present for my niece - now don't be too amazed as this is a LATE Christmas present, not an EARLY one!! I'll be seeing her this weekend so thought I had better get myself organised. As she is now flatting, I decided an oven mitt would be useful - I copied the style I like to use, rather than make one of the smaller 'hands' ones.
[Inside the oven mitt I have used a layer of 'Insul-Bright' and a layer of cotton batting, as recommended. Once I had quilted it, it came up really nice - nice and useable.] 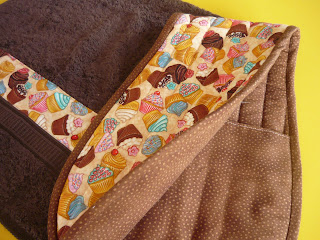 I also added a strip of fabric to a hand towel to match. I just need to add a ring as a hanger at the top but haven't found something to use yet--Mum always used the old shoulder attachment off a discarded bra (from the days when you took all the useful bits off clothes before you put them in the ragbag or threw them out) but I don't think my niece would appreciate that even if I had one - bras are a bit different these days!!
I've also completed one more block of my Life is Beautiful (Hugs n Kisses) quilt, that's three down, many to go!! 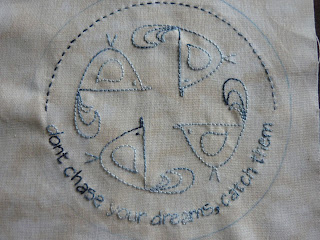 So that's me all caught up... I hope everyone else is having a productive time; happy stitching, and thank you for visiting, 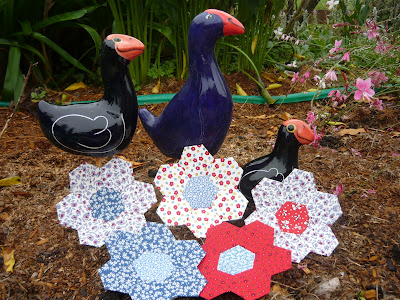 Blue and red theme to match the Pukeko. These latest ones bring my total to 76. I have been joining them in sets of 4 and it is so exciting seeing the piles grow!
The New Zealand Pukeko (pronounced poo-ke-ko) is also known as the Swamp Hen, as it lives wet, damp areas. It's a common little creature which can be a bit of a pest,  but has become quite iconic - a lot of souvenir items include the Pukeko and some people collect all sorts of Pukeko paraphernalia. (Some people also have them out in their garden  - a New Zealand version of The Common Garden Gnome!)
The Mosaic one below is one of my few attempts at mosaics, when a friend came and stayed, bringing her latest crafting craze with her. I didn't really enjoy doing mosaics but love what I made. 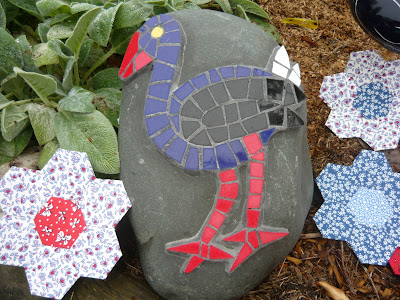 The photo below is of a gift I made my brother and his wife years ago when they moved from their rural property to the Big City. I told them it was to remind them where they had come from! It's so nice to visit these days and see it still being displayed. 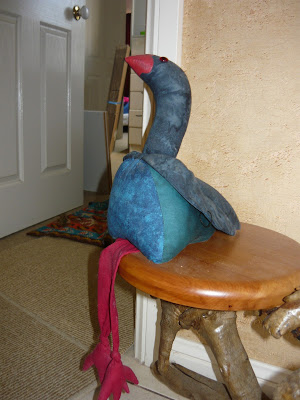 In real life they do have these beautiful colours but I find it very difficult to get close enough to see them!
Thank you for visiting, I hope you have a great day!!

Thank you and Round Robin Year Three!

Putting my money where my mouth is - 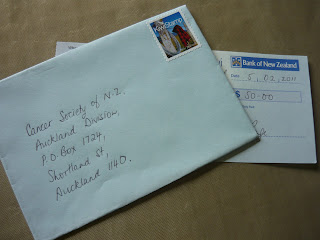 A big thank you to everyone who generously commented on my last post - there were 50 comments (!! :-)!!) so together we raised $50... your kind words and thoughts were appreciated and made the exercise a fun, rewarding affair.  Tomorrow morning a cheque will be winging its way to the NZ Cancer Society; I was told a posted cheque with a note saying WHERE I wanted the money directed to would mean I could dictate what happened to it - so that's $50 towards Brain Cancer research. Thank you again everyone for helping me celebrate my blogging birthday this way.

Tonight we have this year's first meeting for our Round Robin group. I have spent the weekend working on my block for it. Now that it is finished I can relax and look forward to seeing everyone again.
This year we decided to choose a saying, motto or verse to use as a theme for our work. We all make the first block, which we will show tonight. Someone else will take our block and bag of fabric home to do a second block .... and we won't see our own one again for another 9 (I think) months.
So it will be farewell Sunbonnet Sue, I'm sure she will have a lovely time exploring every-one else's sewing room.

I adapted a Sue from Betty Alderman's 'Precious Sunbonnet Quilts', such a lovely book. I have needleturned her - once I finished that I ironed some Parlan on the back and did the stitchery. It has given the block a nice textured look. I was pretty pleased with how the red quilt turned out; I made it 3-dimensional by draping and playing with the fabric. 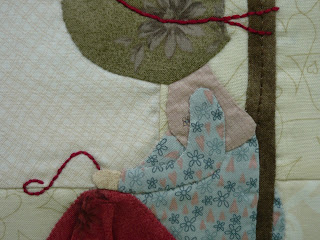 If you want to look, here are some previous posts about my round robin quilts from the last two years - 2010 and 2009.
Happy sewing everyone, have a great week - in the heat or the snow, where-ever you may be!

Labels: helping others, Round Robin

One year ago, my blog  came to life — 12 months of blogging!! 12 months of fun and friendship, caring and sharing around the world!!
Thank you everyone for helping to make this an exciting new area of my life, by visiting, commenting, emailing, and sharing through your own blogs. So many ideas out there, so much inspiration, so many friendly, passionate people!!! (So many links to blog-hop to!!) 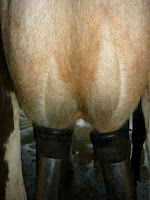 Now, to the relevance of the 'cow' photo!!! Since the flooding over the weekend, I have been spending a bit of time in the cowshed, while the MOML repairs fences, waterlines, races and and so on. And cowshed time is good thinking time -  'the girls' have helped me decide how to celebrate my blogging birthday!!!
NO gimmicks!!! For every comment I have in response to this post, I will donate $1 towards brain tumour (cancer) research.
Those of you who regularly follow my blog will know that my father is suffering from brain tumours; please help me to donate towards this area to help give families more hope in the future.
As I said there are no gimmicks, I don't care if you are a follower or not, and you are welcome to spread the word (gulp - within reason!!) - and one comment each please!
Thanking you in advance :-) bloggy hugs to you all.
(and I hope you are getting more chances to sew than I am!!).