My Round Robin group got together recently for our final official meeting of the year — it was very exciting as we had THE big reveal of all of this year's blocks.
At our first meeting (late January) we had to present a block depicting a saying, poem or similar. That was the last we saw of our own work.
Our bags (containing our original block and our choice of fabrics) went from friend to friend each month. We all made one block for each other, based on the theme depicted in the original block. (There was also an additional challenge each month - to be explained soon in this post...)
Of course rules are made to be broken; someone (who shall remain nameless) hadn't made an original block (she wanted to do an outer border with her saying once all the blocks were made), another someone (who will also remain nameless) made two little mice who will go in the corners of the quilts. We had "The Owl and The Pussy-cat" poem, a Christmas themed story, "When I'm an Old Lady I'll wear Purple" theme, friendship sayings, garden theme, New Zealand theme, and sewing sayings.
So, lots of variety, and lots of fun.
My initial block is the appliqué shown on my sidebar - "I cannot count my day complete, 'til needle, thread and fabric meet".
Below are photos of the blocks my dear friends made for me —
Ans made the first block.  This month's additional challenge was to include an appliqué element.

Jacki was next with this gorgeous spool block. This month's challenge was for a triangle to be included. Challenge well met.
Jenny based her block on one from the "Breast of Friends" BOM. I love this one too.
Kerry rose to the 3-D challenge with this clever needlecase—
I'm sure you can guess this month's challenge- met beautifully by Kerryn —
Jacki came to Mary's rescue in the next month and stitched a second block for me. The challenge this time was 'quilter's choice' which suited Jacki down to the ground.

You would be forgiven for thinking we had another challenge of a 3-D block - it wasn't. Janis made a totally original pincushion block - the challenge was to include a circle - I see several here.
As the months rolled by, some of us were having trouble coming up with fresh ideas, but Jan came up trumps with her spool block —
The final month's challenge may have been to include an oblong shape, but as Jan is new-ish to our group, I'll forgive her :-)

So, whew, that's my rather photo-heavy post - aren't the blocks gorgeous and aren't I lucky to have them - and such talented friends. Thank you, Ladies!! My next challenge is to put them together - I have ideas (and fabric) but you know me, it won't happen overnight!!

Thank you for visiting - have a good weekend every-one, and happy stitching :-)

This week I was pleased to finish my second block of the Homespun magazine BOM; The Quilt Shop.
﻿ ﻿ 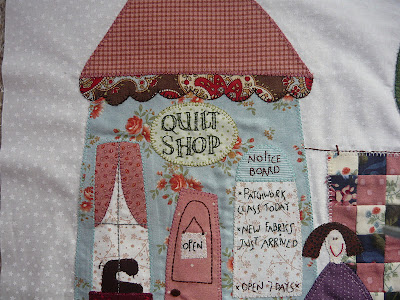 I'm just loving these blocks - they are such fun 'pictures'. [To see more blocks check out the My Town blog - see the link on my sidebar.]
A while ago I showed a block I had done for the charity quilt our Round Robin group is doing. At our get together the other day, we just had to stitch the binding on....

Last weekend we converted the horse stable/spare calf pen to a shearing quarters and got the flock in for shearing.
And speaking of pigs... here is a Thursday Treasure that makes me smile whenever I see it... When I was about 17 I wagged school for an afternnoon and went with the lady I boarded with to 'Craft' at her church group.... we made pottery 'figures'... the salt pig, still in use at Mum and Dad's is the result.
{It was one of the few times I ever missed school like that...but some of us will do anything for  our craft fix won't we?!}
Thanks for visiting, I hope your week is going well, and,
Happy Stitching

Mr Postman has delivered two lovely packages this week. This morning a surprise parcel arrived from Clare. I helped her with some pattern downloads and this is how she thanked me :-) 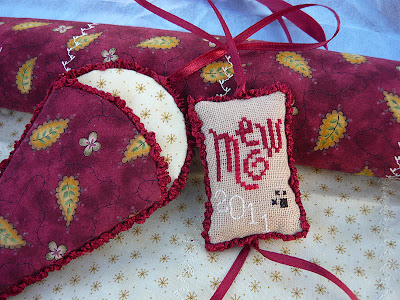 It was a very thoughtful and much appreciated gift. Thank you Clare. She has also just started up a blog - to see more of her beautiful work - you can visit her here.
My second excitement with Mr Postman this week was when this beautiful book from Quiltmania arrived. I had been eyeing it up for some time but Josie twisted my arm and made me get it :-) 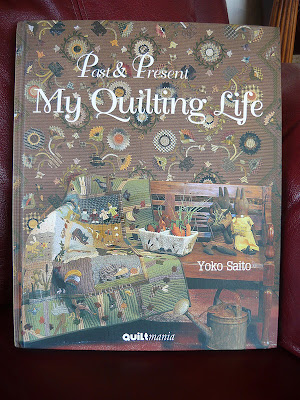 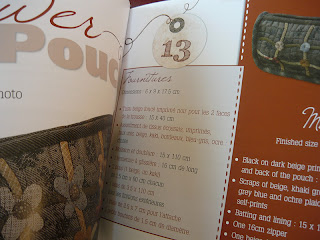 It is full of gorgeous projects - big and small - made from gorgeous fabric and with lots of lovely appliqué on them. I KNOW I will be making things out of this book.


Well that is my excitement for the day, have a good weekend everyone and thank you for visiting, 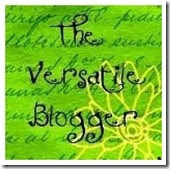 I was delighted recently to receive emails from Wendy (The Calculating Quilter) and Staci (The Confused Quilter). Both had nominated me for A Versatile Blogger Award. Blogging is fun - I enjoy making connections with other like-minded people from around the world, gaining insight, inspiration and motivation from those I visit and build friendships with in Blogland, so it was lovely to receive the emails, and the awards.
These awards come with 'conditions'  -
1. Thank and link back to the person who gave you the award.
2. Share 7 things about yourself on the post.
3. Pass the award to 15 bloggers that you think deserve it.
4.Contact all the bloggers you have picked for the award.

SO; sharing 7 things about me on this post —
1. For a long time my favourite animal was a Pig. When we were growing up we had several as pets (usually the runts of the litter) and I used to love the way their mouths looked when they ate plums [unfortunately in those days all our pets ended up on our dinner plates-- that is something we are unable to do these days!].
2. I used to sew lingerie for a friend's Lingerie Party business. That was interesting and I still have several rolls of satin waiting to be made into more nighties, etc.
3. I do not like heights but used to love abseiling.
4. Until I was 18 I always wanted to be a vet but decided against it as I did not fancy the years of study and went farming instead. Not many farmworkers had 7th form physics and chemistry!!
5. Some favourite activities I used to enjoy were bike riding and kayaking. And I loved playing netball.
6. Although I am a 'farmgirl' I do not DO machinery! Being in control of tractors and chainsaws scares me and I leave that 'strictly to the boys'.
7. My three children are a continual source of awe and amazement -- at how they have grown up into such lovely young adults :-)

NOW; passing the award on —
I follow lots of different blogs for lots of different reasons; some I can relate totally to..i.e..same tastes; some put me out of my comfort zone..i.e..different tastes; there are some that make me smile, or laugh; others I really enjoy their style of writing, or I have participated in projects with...and so on. To all you bloggers out there, and those who comment, but don't necessarily have a blog, thank you for your warmth and friendship and all the wonderful sharing you all do.
Here are a selection of Versatile Blogs :-)
1. Cat - Catalina's Cottage
2. Melody - thehouseonthesideofthehill
3. Linda - Little Bits And Pieces
4. Leanne - Cottage Tails
5. Shirley - Stitcherydo
6. Sunny - Quilting Dreams
7. Kelli - Seriously...I think it needs stitches
8. Kate - Show and Tell
9. Michelle - It's Sew Me
10. Leeanne - quiltmekiwi
11. Nicky - Farm Girl Stitching
12. Josie - Dilly Dimple
13. Helen - Aunty Hetty's
14. ms. lottie - The Slightly Mad Quilt Lady
15. LuAnn - Loose Threads

If you haven't already 'met' the above ladies, I encourage you to call in and visit them.

I know it's actually half way through the week (already) but I haven't had a chance yet to share what I completed over the weekend.
A group of us got together on Friday night and had a lovely midnight madness sewing session.
First on my list was to make a book cover--- 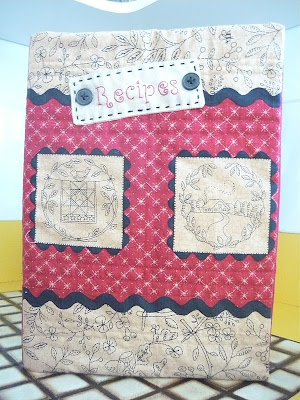 {YD has put an order in for one of these now-- I have some cup cake fabric somewhere which will be just perfect.}

Next on my list was to complete the first two rounds on my Stay-At-Home-Round-Robin. Sunny over at Quilting Dreams is hosting this and I thought it would be an ideal opportunity to make a quilt for YD... she could help in the planning and picking her OWN colours and I, of course would do the sewing.
Month 1 instructions were for a centre block 12 to 18 " in size.
Month 2 asked us to have a 3 inch border with triangles.

Our midnight madness ended about then; I know I'm not the only one who did this but I packed three times as many projects to do than I needed and  took most of them home again untouched!
Never mind - it game me plenty to carry on with over the rest of the weekend!
I finished this little stitchery for a friend - it is very cute and fun to do (not a good photo sorry).
And on Sunday I was determined to make one of these (below) --- a gorgeous little Thread Catcher. I have been following the Moda Country Fair Blog Hop and enjoyed reading the posts of the different designers (and checking out the pattern each one offered) ... and wow... the food at their Country Fairs sounds Intriguing!! A far cry from the hotdogs on a stick and candy floss that I grew up on at our equivalent here in New Zealand (the A and P (Agricultural and Pastoral) shows). Anyway Lisa Bongean of Primitive Gatherings offered this pattern which went to the top of my must-do list. It turned out so cool, I made a second, identical, one for a friend.
Unfortunately it was a one day item on her blog so the pattern is no long available. 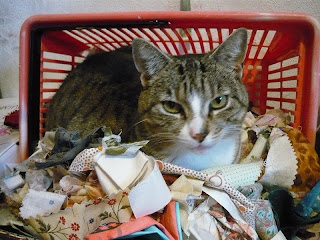 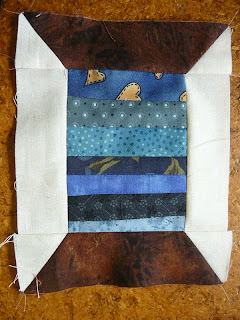 And - oh dear-Katie Cat had a bit of a rummage in my scrap basket the other day, looking for a comfy place to sleep. She has spurred me on to sorting them out - I know I am supposed to sort and trim them as I go but it doesn't always happen. However, here is the result of her prompting - my first scrappy spool block which will be part of the next border of my Klosjes quilt (untouched for a while now, but definitely still a WIP!) 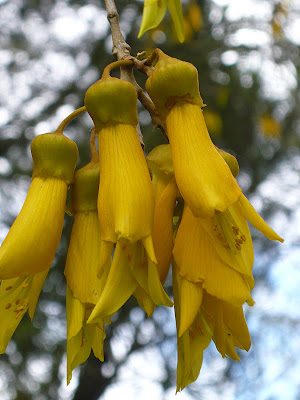 And one last photo - we had our annual pilgrimage out to the very back of the farm this morning to see the Kowhai Trees in flower - a beautiful sight, as always. The flowers are gorgeous and the trees stunning.


Now I feel caught up - and I can get on with my week; it is Wednesday today so I'd best go make another hexie-flower,
happy stitching every-one,