I had this romantic notion that my winter this year would be filled with lots of sewing and crafting. With it being the 'off-season' on the farm and no cows to milk at the moment, I pictured myself in The Palace (sewing room) tackling piles of ufos and projects.
Instead I've been reduced to snatching moments when I can, However, snatching moments has resulted in a few ticks off on my list —
Stitchery in the evenings has been taken over by some knitting....
But before I got stuck into the knitting I finished up this block from the Calendar Bears project —

The stitchery fabric we are using for this project is a shot cotton which was a little difficult to trace through. Instead I started using an iron-on transfer pen... I draw the design on the back of the pattern so it is reversed, then press it onto the fabric and hey presto it works! 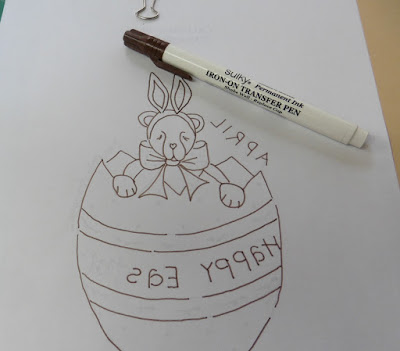 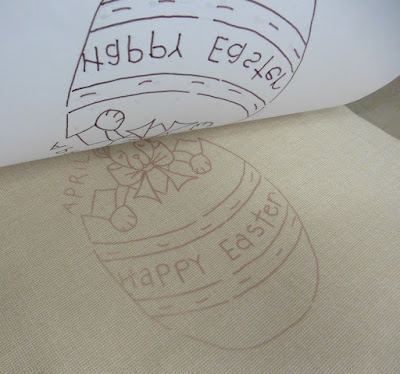 Another project I've been working on is this one. And this is all I'm showing for now. Some of you may be able to guess what it's all about... I will reveal it at some stage :-) 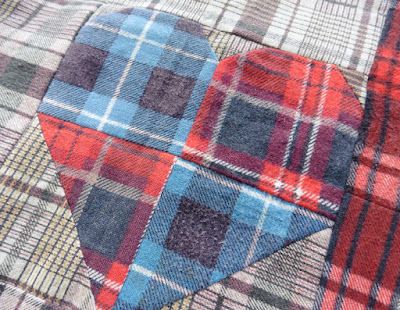 I had two monthly projects I was trying to keep up with this year; one, the Free Motion Cushion Challenge and the other, the Rainbow Scrap Challenge. Very sadly I've not been able to complete the cushion challenge for the last two months, but I am scrapping slowly along with my scraps. May's colour was Dark Green - I've completed the blocks for that —
I spent the last two days sorting some cot sheets for my son and dil, they wanted some adjustments done which I was happy to do... apart from needing a little more velcro, they're all done and just about ready to put in my suitcase for my next trip over to see them. Counting down the weeks till those babies arrive!
And down on the farm, we had this view the other morning... yes, a ripper of a frost in Northland. We're happy they don't happen very often but I'm always in awe of all the white when it does frost up! 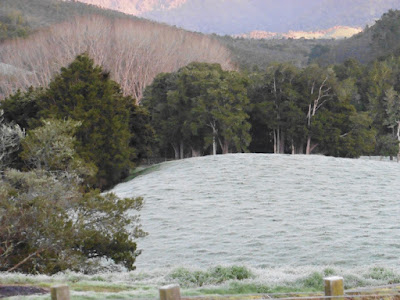 In case you were wondering, the teenagers (Henny, Penny, Jenny, Wendy, Brenda, Milly, Molly and Mandy) are doing well and growing up really fast. They're doing a good job of looking after themselves, I've often seen them chasing the dogs or the cat, goose-style! Still waiting for the eggs to start flowing though...
Speaking of the chooks and chickens, it's now time to go and feed them, get the firewood in (even in mild Northland we feel the cold!) and sort out some tea.
Wishing you a creative week with plenty of happiness thrown in,


We've had some good winter weather lately - here in Northland the weekend was mostly fine and mild but also a little dismal and 'grey' so I figured it was perfect for staying inside to get a few wee projects done. This felt very satisfying as they weren't big jobs and it seems that I've managed to achieve lots!
First up I made this 'whole cloth' quilt.... just some pretty fabric my dil found. She thought it would be nice with some minky on the back so of course I offered to put it together for her :-)
I included a layer of bamboo batting to give it a little body without adding too much bulk and quilted it with a very simple, large meander. 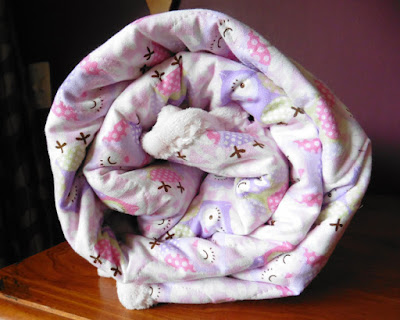 To make it even simpler, I brought the minky to the front and sewed it down with a 3-step zig-zag. No sweat! 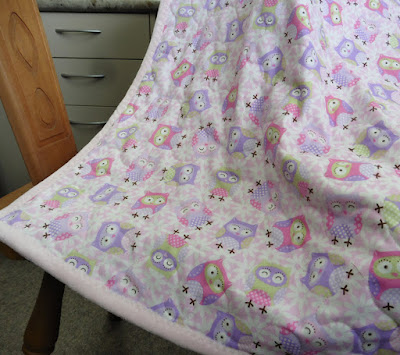 Another straight forward project was this pair of Happy Pants for a family member with a birthday.
In my last post, I didn't share about all the crocheting I did in the car when we were away on our road trip. I had also made these little granny squares. Mum and I had a discussion about whether they were Granny Squares or Peggy Squares... With the help of google I discovered that Granny Squares are crocheted and Peggy Squares are knitted - but also that the naming of them as Peggy Squares is a New Zealand thing with an interesting story behind it.
(If you are at all curious, here are some if the links I found; loosingsleepcountingsheep and miydiy.)
Anyway back to my squares... I've sewn them together — 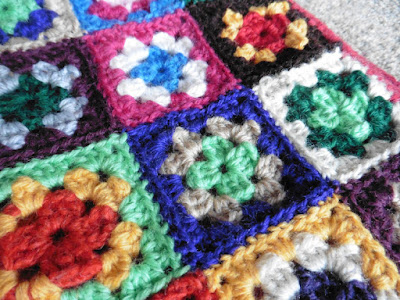 — and made them into this hottie cover —
Alexandra MacKenzie is the designer of this hottie cover. It was another fun make, the pattern is here on Ravelry.
I've spent some time cutting out my next lot of rainbow scrap blocks and some stars I'm making and some hexies and so I think it's time for me to get sewing! Whew never a dull moment around here and what better way to spend my winter days!

Hope the season is treating you all well, thank you for visiting,
happy creating,

To be honest, a no-sew weekend doesn't happen very often around here, but this last weekend I had the perfect excuse to keep my needles and threads idle.
The MOML and I spent 4 nights away ... we went on a road trip to visit our daughter, ED, who is now living and working near Wellington. It's a long way from the top part of the North Island where we live to the bottom of the North Island but we had a great time, the trip was well worth the hours spent in the car.
Wellington put on fabulous weather for us so we were able to get out and about a lot :-)
We did a little more than walk the dog and visit the Chiropracter (etc) and on route we also visited YD, Mum, some old uni' friends and squeezed in a bit of shopping...but we came home feeling refreshed and rested so that was great!
And you all know I cant keep my fingers still for long so I was happy to while away the hours in the car with some crochet projects. I made two of these African Flower pin cushions... wee gifts for a couple of special friends :-) 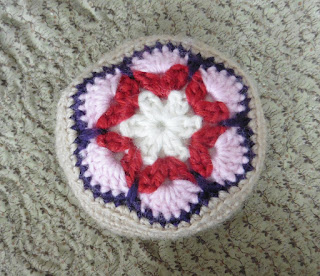 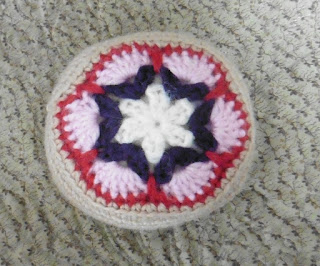 And started this project too - I have a lot of scraps of wool so wanted a blanket/afghan pattern that would use a fair bit of it up...I think this lazy waves blanket will keep me going for a while, it takes me ages to do just one row! 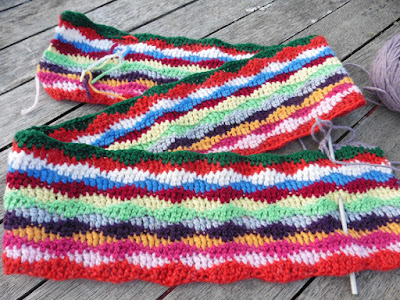 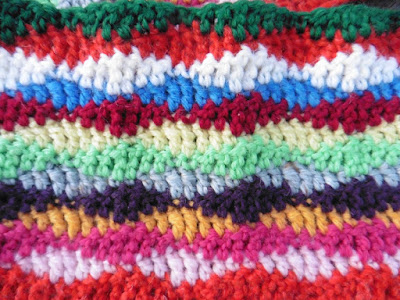 Mum must have known I was on a scrap-crochet mission as she'd sorted out a basket of 'bits and pieces' wool for me —
One last photo - I offered to teach ED to crochet (yes, my job as a mother failed miserably as I'd not taught her in the past) and she had quite a nice little time doing it. She did decide she liked doing rings with double crochets (sc? in US terms) and making the rings one on top of another so we decided she was a free form crocheter!

See you next time,
happy creating
♥
,

Late for the party! 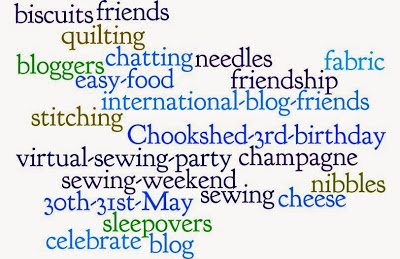 Chooky was so kind and invited us all to her Chookshed's 3rd birthday party this past weekend...it was an actual and virtual affair... I understand too much champagne was drunk by some but it does seem some progress was made on different projects.
I was the one who kept getting to the door, then had to turn around and head off again - at one stage I thought I was never going to get there...
BUT I DID!
And I was the one still sewing while everyone else had gone home - however being Queen's Birthday weekend and today (Monday) a holiday, it still felt like I could get away with a bit of late partying!
Bits and pieces were the order of the day.....

All in all it seems I got a fair bit done so I'm glad about that - thanks so much Chooky for having us all to visit...and Happy Birthday to the Chookshed!! Any one who wants to see who else was at the party, here's Chooky's link-up post and to see more hi jinx, just click *here*.

So what slowed my partying down? On Saturday I was at work at The Country Yard. The Northern Quilt Shophop has been on over the past few weeks - 8 shops took part; each made a quilt... people registered for their favourite/s and then had to visit each shop to collect all the blocks. It was a lot of fun..we met a lot of people! Our quilt was called Love in Paris - you can see it on Leeanne's blog.
And more of the weekend was taken up with farmwork... we had a VERY early start on Sunday morning... had our last milking for the season and took the girls out to the back of the farm. The track was a bit greasy with rain overnight but it's quite a nice walk.

And a bit later on the fully laden milk tanker got stuck in our driveway, it's a little steep out onto the road and with that bit of overnight rain he slid sideways as he tried to turn. A long wait and an hour with the towtruck and he was finally on his way. (And our letterbox, fences and trees are still intact!)
Lucky it was the weekend as he was right across the road blocking it - there would have been 3 hours traffic backed up! 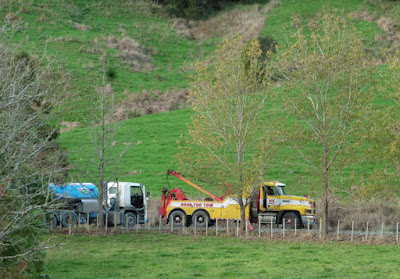 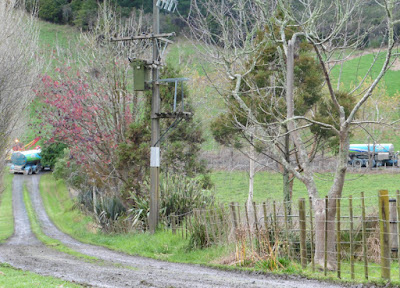 This coming weekend we are having a few days away, which we are looking forward to..dairy farmers often have winter holidays when the cows are dry! It will be nice to catch up with a few people and of course my priority this week will be sorting out a new car crochet project :-)

See you next time,
happy creating!
♥