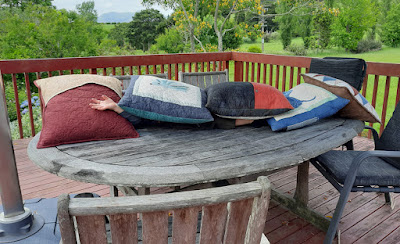 Cushions get a hard time around here. They are a constant prop for all the kids' play. Always used differently and creatively, depending on the child and the day.
(Actually the adults use them a lot, too, but in different ways!)
It makes my heart sing to see them being used so much. But of course, all that play means they get worn, and faded and stained. None of them are ready to replace yet, but it does mean I have a good reason for keeping on making them!
So I'm very pleased to have (finally) finished my big Boxer floor cushion.
In my last post, I was partway through the quilting — 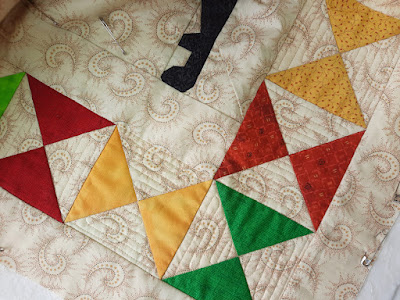 I used the Hourglass blocks as a basis for the background quilting. I did consider continuing on with the narrow line fill in the triangles of the background but decided I didn't really need all that extra work! — 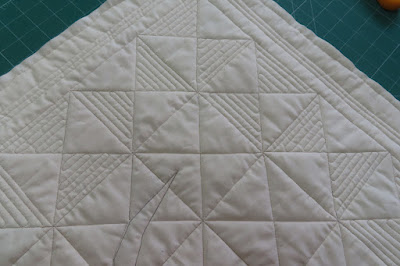 You can see (above) that I just did a few straight lines around the outer border. (I used quilters muslin for the backing so the quilting shows up well!)
Being a cushion, it then needed another back.....so far I had used only leftovers and stash, so I rummaged through my non-quilting cupboard and found some pieces suitable to use — 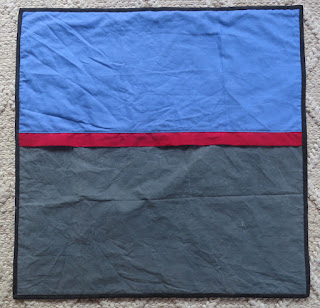 The grey is a reasonable sized remnant from making shorts for my son YEARS ago ( I loved those shorts, that fabric wore sooo well!), the blue is cut off from curtains which I doubled for extra weight. The red is leftovers from making absolutely heaps of boy scout scarves for a jamboree many moons ago.
And the zip, I think, is one Mum unpicked from a pair of Dad's farm overalls. It's been waiting a while for its chance to shine again! 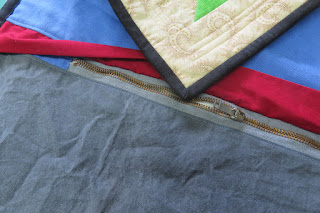 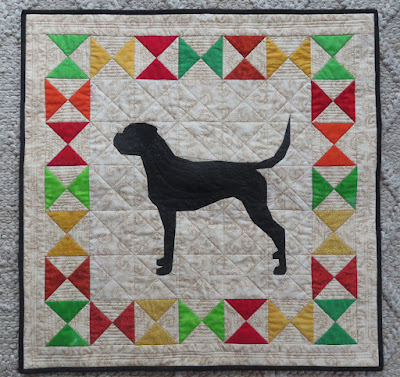 More details of the cushion make are *here* but it did start life as a fun and fabulous test block for Juliet of Tartankiwi and was added onto during the Time In A Bottle bloghop run by Carol of Just Let Me Quilt. 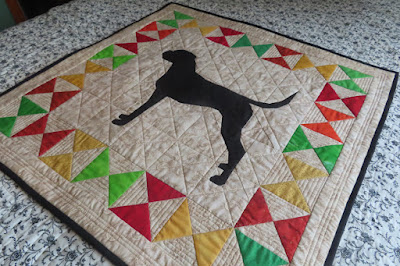 Because of its size (32" square) it's waiting for its inner - I have that under control; I took advantage of a Black Friday sale and just need to collect it.
I'm linking up to Andree's Free Motion Mavericks - visit *here*.
My block count for November was fairly abysmal; I made a total of 12 blocks - two of them were stitchery blocks, five more hourglass blocks for my Smidgeon project. And five more Churn dash blocks. 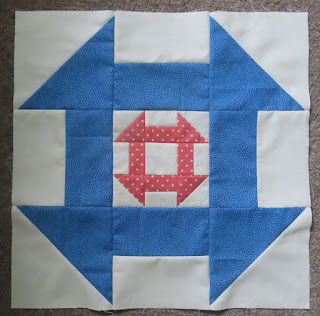 The idea was that our Churn dash quilts/projects would be completed by the end of October. Hmm - a bit of a miss there for me, but I keep chipping away. Of course it doesn't help that I chose a pattern that creates a HUGE quilt!
The block below measures 24"! 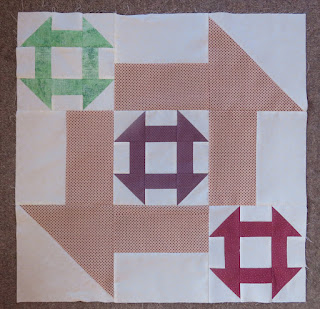 I had to do a bit of 'making-do' to make my scraps work. I think in the long run it will be barely noticeable — 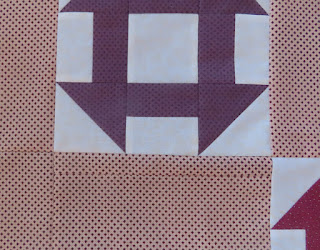 I have assembled one corner of it — 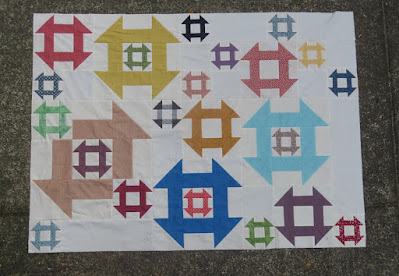 It's a fun quilt to make, keeping me on my toes. I'm trying to not repeat fabrics but have the odd double-up. The pattern is Barn Dance by Denise Russart.
In other news, I have got some new babies to look after — 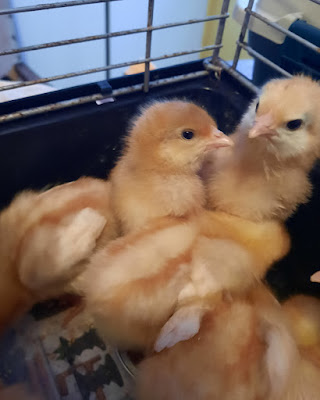 14 of them! I haven't had any new ones to raise for a long time as the pet shop had trouble getting them in. The last babies I raised are in their second year of laying now. Four of these ones will go to my daughter-in-law's.
These photos were taken when they were about 3 days old - they've now outgrown the cat cage and are in a box. 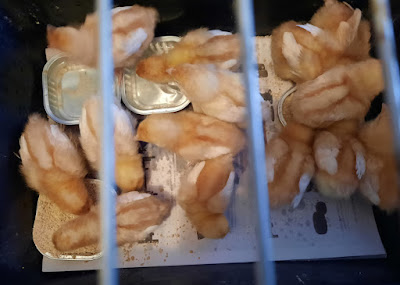 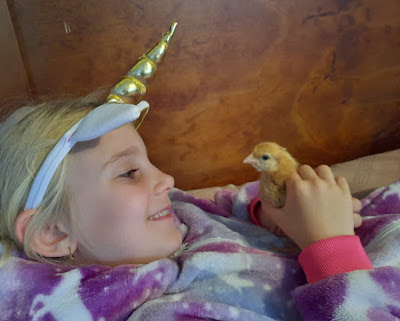 One last photo. The Tui have been singing away lately and I managed to get a photo of one that wasn't nestled amongst the branches. Not the best photo light-wise but it shows the tufts at the neck really well. 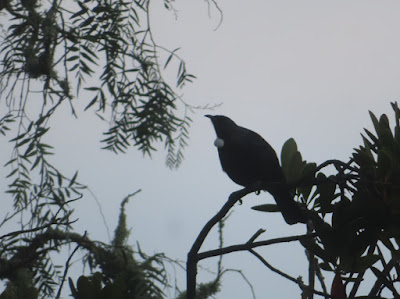 Ok time to be off,
'til next time,
happy stitches,

It still looks a lot of work!!
We are looking forward to seeing the Tūis..I wonder how far South they live?

love the cushion covers and love seeing that hand peaking out from under the cushions on the table - kids will be kids won't they!

The children will enjoy that cushion. Great finish.
Oooh! Baby chicks, I remember dad bringing them into the big shed and setting up a heating lamp and listening to the cheep cheeps.
Lovely to hear the Tuis? Tui? What is the plural?

Love your churn dash blocks and the boxer cushion. Beautiful photo of grandie with chicken! Wonderful to see the tui.

what a great finish on your cushion cover and I love how the churn dashes are coming along. Cute bird picture. xx

Oh. The chicks are so cute. I loved it when I was at my brothers and he had about a dozen. They were so soft and beautiful

loving that churn dash raewyn! and congrats on the new babies...

The boxer cushion is really cute, nice size too. Good job on all the churn dash blocks. Sweet little chicks. We’ve had problems getting them here too. They say it it because of flocks being killed off because of bird flu.

It took me a minute to find the hand coming out from those cushions. Made me laugh.
Congrats on completion of the Boxer project. Really classy looking!
Love, love, love how you created the churn dash overlapping and merging into each other. Very eye-catching!
Oh, sweet little chicks! That takes me WAAAAYYY back to when I was a wee thing and my Grandpa had a farm where his hobby of breeding chickens almost outranked his livelihood has a cattle farmer. I always loved those downy soft little bits of fluff.

Hi Raewyn, the cushions are great for cubby houses etc and I love your new addition. I am terrible about throwing out old ones as I get too fond of them all if they are handmade!!! Love how Barn Dance is turning out.... it's on my wish list of ones to make..

Love seeing the wee hand poke out of those cushions.
The big Boxer floor cushion is great and I’m sure will be well used.
Your Barn Dance Churn Dash looks fabulous.
Sweet photo of the grandie unicorn holding the 🐤.

Hi Raewyn, what a great finish for your cushion! Your blocks are really different and lovely. Your pictures of the chicks and with your granddaughter are wonderful! Thanks so much for linking up to Free Motion Mavericks!

Oh, I'm glad you pointed out the Tui's tufts! So cool, and I wouldn't have realized or noticed them otherwise. The boxer cushion is awesome, as is the quilting on it. Drat, I forgot to take a photo of the muslin back of my bench pillow I just finished this week. I've left off the muslin in a few, but prefer to have it; looks neater, not that many will peer inside once the form is in! I, too, love seeing cushions used and loved, and they really are fun to make. Adorable chicks too!

Catch up time for me.
Your Boxer cushion looks amazing. And I agree that it is good to see everything being used!!!
Lovely to see the churn dash blocks coming together.
Bet those chicks are growing quickly.

Lovely to see your barn dance blocks all coming together, looking super!

Raewyn - I would love to have kids around to mangle my cushions - one day ...

Your cushion looks amazing, and good job with the calf rearing. 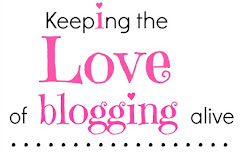