I'm so pleased I took my blocks outside into the sun yesterday morning for some photographing. The day gradually got worse and we ended up getting some serious rain. 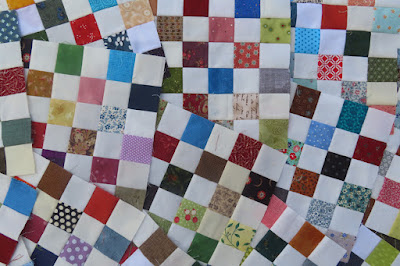 First up are my 36-patch blocks which seriously took over! I honestly forgot they were supposed to be my leader-ender project - I had so much fun sorting through my scraps for the 2" squares. I found these were also a good non-thinking way to sew when I just had small snatches of time. 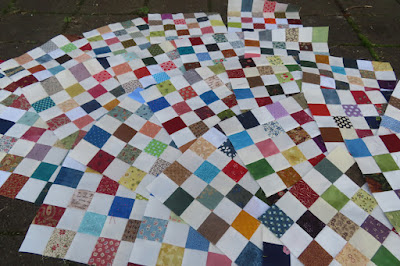 The thing about Leader-Ender projects is that they are supposed to sit quietly in the background while a MAIN project gets worked on. That, obviously, is not always the case!
Anyway, these blocks are for Jessica Dayon's Smidgeon quilt. I'm making mine a little wider than hers as I didn't want to stop making the blocks (!), but also I thought that making it bigger would suit us better.
The next step is to decide what colour I want to use to surround these blocks, and also another fabric for the outer borders. These larger amounts of colour will help tie the whole quilt together. 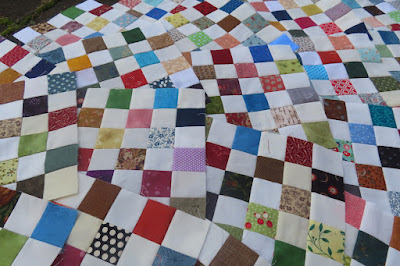 Although I was battling with a slight breeze, I also managed to photograph my Popstar blocks. I have had these finished for a while but it's taken me a while to get them to the photography stage and onto my blog!
I made in a sewalong with a few friends. I got a little behind .... 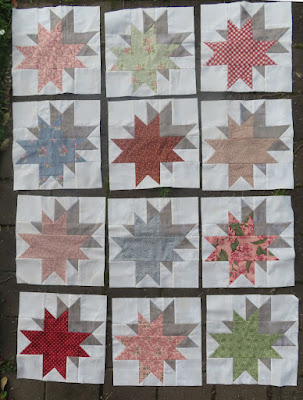 These fabrics are really pretty but incredibly hard to photograph. In real life the colours are brighter and the contrast between the green/blue and the grey star-shadow is a lot better. 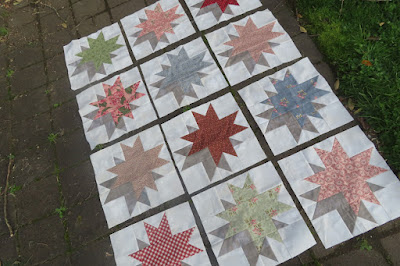 The pattern is Popstar by The Fat Quarter Shop. 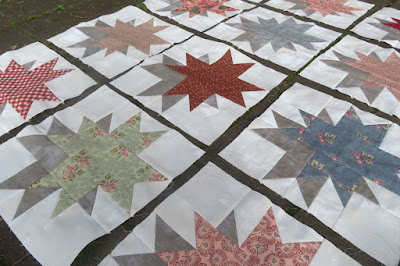 In other news, I haven't yet bragged about the hill-a-day challenge I set myself in May. It felt like I started walking, and just kept on going. We live in a hilly area so there is no shortage of hills on our farm to tackle. Once you get up the first one, it's easy to keep on walking and do the next as well! In all I walked a total of 117kms during May..... my goal was to do 100 so I well surpassed that!
There's a wee peak just off the farm track that I like to climb for a bit of extra height. This was the view from it one morning — 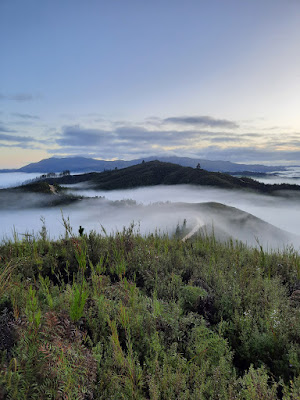 (You can just make out the clay track along the ridge.)
June hasn't been as nearly as productive walking-wise. I had two busy weekends and a slightly sore ankle which needed resting. We've also had more rain this month which makes the clay tracks either sludgy or greasy. Neither make ideal walking conditions so I time my walks for when we've had some sunshine to dry things out a little.
Yesterday morning though, while it was still fine, I managed another walk. I went the opposite direction to the above walk and passed the cows on the way — 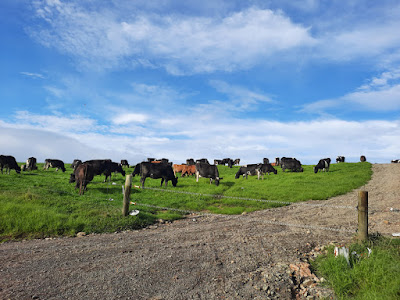 As it's winter and the cows are not milking they are on winter rations. They'd not long had a fresh break of grass so totally ignored me as I went by. 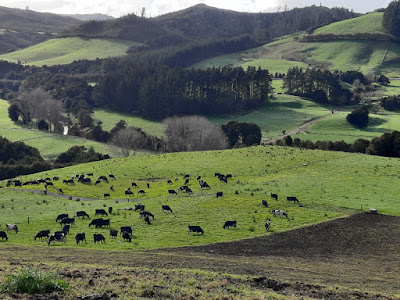 I went  up a wee way into the bush, but not very far - I wanted to get back home to photograph my blocks!!
The house and buildings are about centre of the photo below, so as you can see, pretty much everywhere, if you want to go some distance, involves a hill! 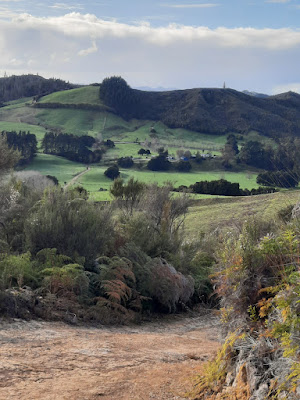 Last weekend Miss Lily had a sleepover here, all by herself. When you're a twin, that's a pretty exciting event! She had several requests for her sleepover. One was that she help Ganma make Blueberry pie and the other was that she do some more sewing for her dolls.
We use a lot of blueberries - muffins, smoothies, snacking, etc but a Blueberry pie isn't something that's usually on any of our menus so it took a bit of thinking to make a nice and easy AND gluten free version. But we succeeded and she really enjoyed it!! 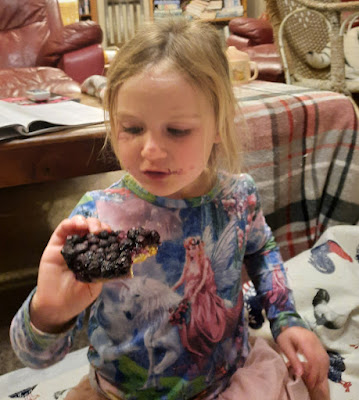 The sewing bit was to make (more) quilts for her Barbies. She has a couple of the little 'child' barbies so a small quilt was all that was needed. We made one that day and yesterday when her and her dad called in for a cuppa, she decided she needed to finish the second one. 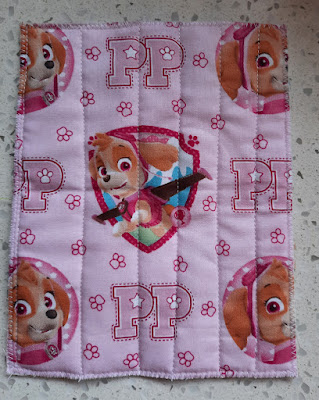 I didn't get a photo of the first - a blue one identical to this! Once again, the quickest quilt I have ever made. Sew through all the layers and then zigzag the edge 😁 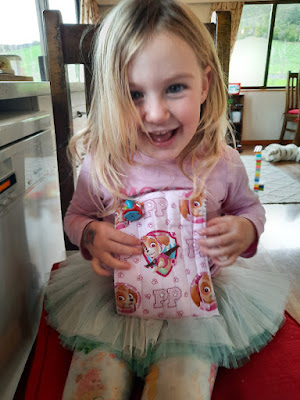 WELL DONE on the walking. The scenery where you live always makes me happy - hills and all.

Great post Raewyn, how happy is Miss Lily with her quilt, lovely photo. Your blocks look amazing, and well done with the walking, some of your hills are steep and go on for a while! Great to see farm photos, love the one with the misty clouds in the valley.

Oh those leader and enders sure can take over! Your Stars look great.
Well done with your walks. Such beautiful scenery to see as you go at your place.
Love the photos of Lily both with her pie face and the huge smile holding dolly’s quilt.

I love those 2 inch scraps and the blocks made from them - I just haven't been able to get into that "leader ender" method myself but always love what everyone else does with them. Your star blocks are wonderful too. Always love seeing the scenery from your end of the world

Your Pop Star QAL piece is gorgeous as are these pop stars too. Lots of lovely stitching going on including that very cute dolly blanket for such an adorable pie taster.

Great achievement with all that walking, and that blueberry pie looks yum, special visit with grandma!

You live in a absolutely beautiful part of the world. At least you know when you walk up those hills, you'll be rewarded with a stunning view. Great leader and ender project.

Awe, precious time with Grandma is the best! Yes, your leader/ender has taken over, but what the heck, why not.
I loved reading about your hilly walking goal and how much you exceeded it. The scenery is so beautiful even for winter. I bet it is so enjoyable and peaceful.

I love the scrappy blocks and the Popstar design is a brilliant one. Always good to see pictures of the farm - you did a great job on your walking target! xx

That view is stunning! Well done on the walking. As you say, it's hilly where you are!!
Lily is a lovely wee lass❤️

Those two inch squares...!! I would surround them with a dark or at least strong colour.

at that age it's all about making the memories...she might not remember the details but she will never ever forget her ganma...

And just like that, a quilter is born.
She bakes too, before you know it she will be hiking up in to the hills, just like Ganma.

LOVE the Popstar blocks! The leaders/ender blocks are fantastic too - so simple, but so pretty. The walks look challenging and beautiful. Lily looks tickled to have had such special time doing just what she wanted. Isn’t the one on one time fabulous?

Oh I envy your walking. I just walk circuits of the property if the weather is not terrible, by being too hot and humid, or too wet, too cold. Lovely blocks, especially the popstar ones. Little ones sometimes just like to be with their grands, and doing such simple things, baking cookies, letting them help means so much to them. Even when they are older at times. LOL

Walking--I do that in my mind and always say I will start --tomorrow or on Monday if it's a week end--but---???/ And now the weather has gotten hot here--soooo?????
One on One with Grandma is wonderful and then to be able to bake and sew too--heaven!!
hugs, di

Look at all the color in those leader/ender blocks!!
Popstar is a really clever design. Don't know how people ever think of things like that.
Oh, I love the views of your walks. WOW!! Just gorgeous
I haven't made a blueberry pie since before I was gluten free. I have attempted triple berry, pear, pumpkin, and pecan, all with gluten free crust. Still not thrilled with any crust recipe I have tried, but I do confess to being a "flaky pie crust" snob and gluten free crusts have all turned out more like shortbread, than flaky crust.
Someone appears to be very thrilled with the new doll quilt!

You have been energetic with all your walks. Such beautiful views with the fog in the valley. Smidgeon is going to be nice and bright. A great leader and ender pattern. Pop stars is also lovely. It sounds like you two had some quality girls time together.

All those quilt blocks are looking wonderful. You have collected quite a pile.
Well done on your hill challenge, too.
And how special to have a one at a time sleep over!!!

Your leader & enders squares will look super all together, I love them! And great to achieve all your walking goals. I too, enjoy sewing with the grandchildren, making memories!

Raewyn - congratulations for your hill walking! And thanks for sharing these photos - such wonderful new views of the area around your farm!! And Miss Lily in the tutu - precious!!!