It was all about stars in my last post, and I have made several more for the Scrappy Star Adventure since then.
Another one using the Month 3 pattern — 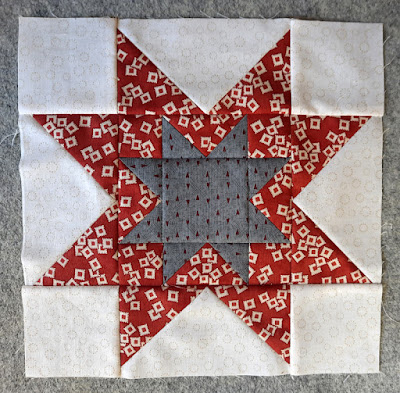 And then three of the (new) month 6 pattern. A six inch version — 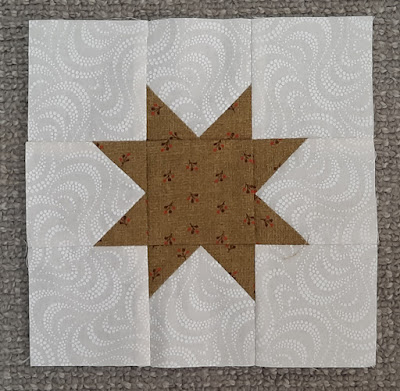 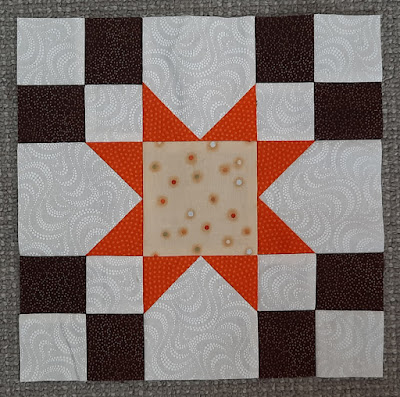 I quite like how this star floats in the middle of the block, which you can then fill up with other designs! 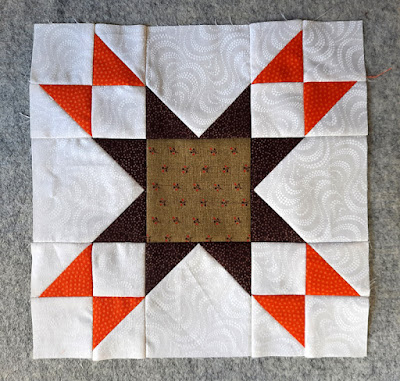 That's 24 stars made now - I'm not sure how many I need, but a whole lot more than that!
And I finished Block six of The Santa, The Tree, The Turkey and Me — 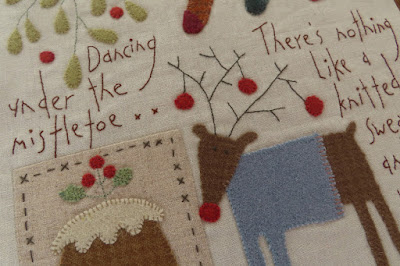 (Rudolf does actually have eyes but I may have to re-do them so that he can actually see where he is going!) 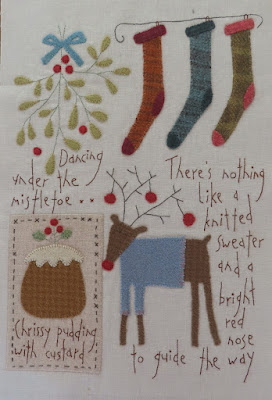 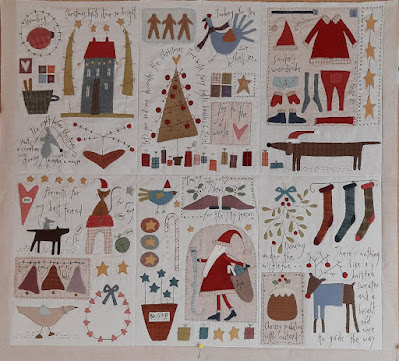 The seventh block goes along the top; I have made a start on it but haven't got a photo of it to share yet. I'll be able to get back to this project now as I have finally finished Lily's cardigan, which I started in June when we were on holiday. I had a bit of a pause while waiting for some more wool to arrive, and then it seemed to take me forever to sew up. We don't have as much sit-down time in the evenings at the moment so I'm blaming it on that! 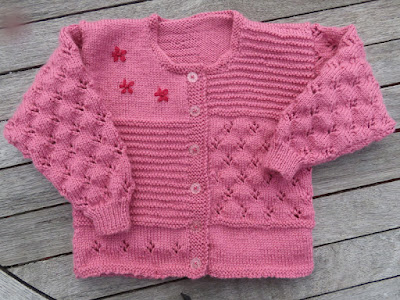 *This* is the pattern for it. 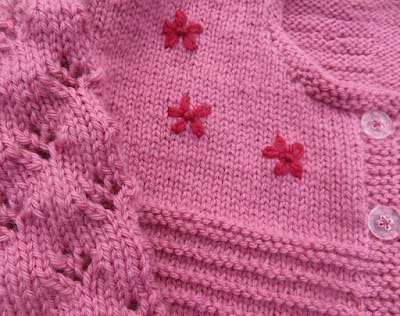 I gave up on the Lazy Daisies, which are supposed to be in all the plain Stocking Stitch areas. Lily always comments when I wear clothing with 'pretty flowers' on it, so I gave her a few. But only a few! 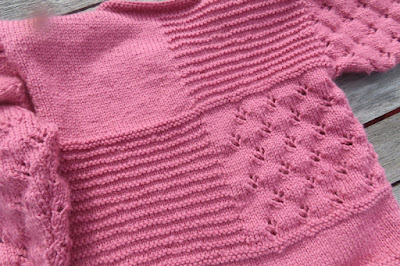 On the farming front, calving has got quite busy. We have well over a third of the herd in now and are sending milk to the factory - it always seems to happen so quickly! 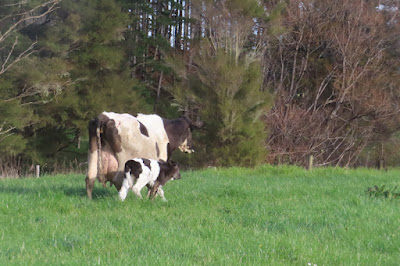 Some days are quite peaceful — 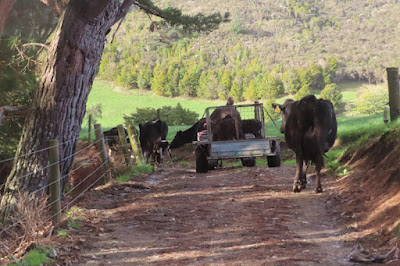 Others are more manic. We had 14 new calves on Saturday! Pretty much a record for us. Don't forget it's just Ma and Pa Kettle here looking after all these animals!
Here's what one day's worth of calves looked like on Saturday — 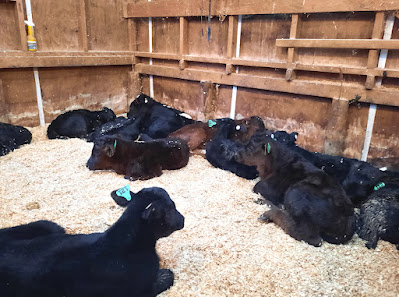 My calf shed quickly got full — 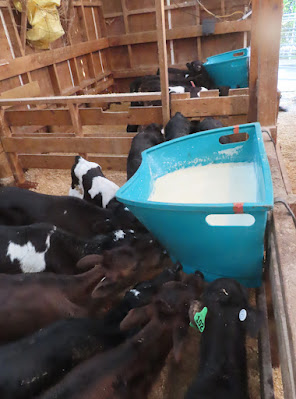 So I've moved the older calves to another shed. These ones now have a room with a view; I'll open the gate for them to enjoy the outdoors when the paddock dries up a little more. 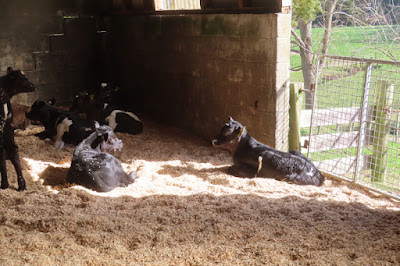 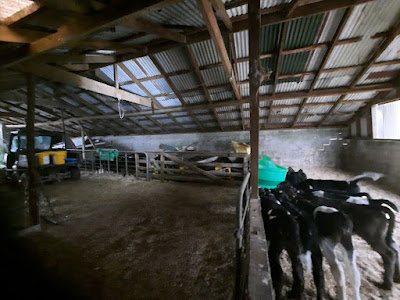 In between times we've had a nearly-flood. As you can see the bridge was impassable for a wee bit and there's always plenty of debris left behind. That created a bit of (very) early morning stockwork. We were back in bed by 5.30am!!!! 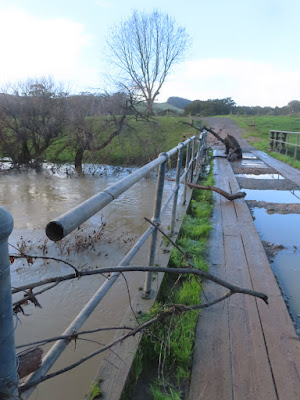 Another day the hot water cylinder at the cowshed packed it in. The easiest way to get hot water for my calf milk that night was to heat it on the BBQ. A very slow process! 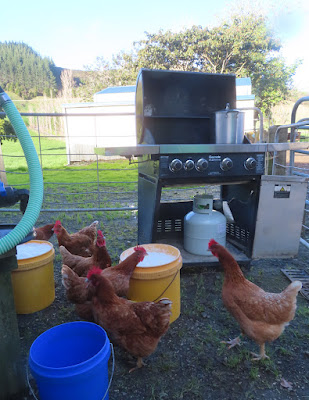 The two calves below amused me - both born exactly the same day but one was twice the size of the other! Just like human babies, calf babies come in all shapes and sizes. 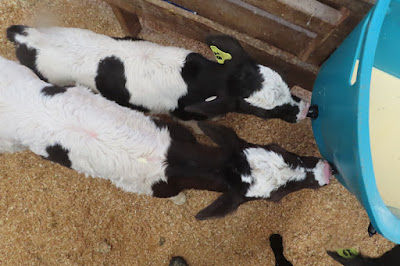 This morning all was well with the world. Happy animals - and not too many new calvers to deal with. 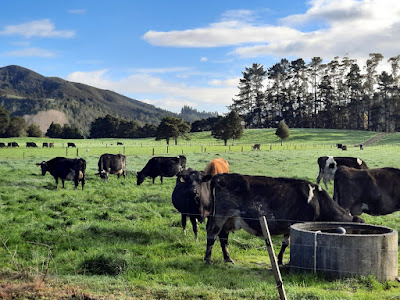 What a busy life! I am surprised you have any time at all to sew! The little cardigan is so pretty and where the flowers are concerned I always think less is more. Great stars and Christmas is looking amazing! xx

Calving is always such a busy time on your farm and the near flooding didn’t help…..
It’s nice you actually get some me time to sew … lots of lovely Stars ⭐️ and good progress on the Santa project.
What a cute cardigan for Lily and she’ll be happy with her daisies….

Lovely star blocks and your Christmas quilt is looking great. That little cardigan so sweet! Wow 14 new babies! So very cute though. Sounds like you have had loads going on at your place xx

They are all very cute but still a lot of work. Love the knitting.

Love the star blocks Raewyn, and the knitted cardy is beautiful. Life is super busy on the farm for you just now, the calves are so cute.

The star blocks are lovely and Lily's sweater is so cute. Hope you can find sometime for sewing this week but you still have a ways to go with calving. Happy stitching when you can!

Those calves sure are keeping you busy.
The wee pink cardi with it's pretty flowers is adorable.

It’s amazing that you would have any time to stitch, when you have been so busy with farm work. The calves all look contented.

I love stars in stars blocks. Wonderful and that pink sweater is so cute. You are so busy with all the farm work it is a wonder you have time for stitching.

Love the star in a star!

Some farms around here are going back to leaving calves with their mothers so the calf gets some and the dairy gets some...quite interesting results too.

Really enjoyed your post. Such a lovely collection of stars. The pink cardigan is beautiful. Never seen a pattern like this before, it’s gorgeous. Great photos of your farm animals!

I love those 2 black and white calves--cute!!! And I see you had alot of help in getting the water to boil (those chickens are always good helpers!)
and a lovely pink sweater there--lots of different stitches--
and a nice assortment of sewing projects--
sounds like you keep busy --
luv, di

Stary eyed there with those patch stars and I love how the Christmas quilt is looking.... heaps going on at the farm... I'm surprised you get any sit down time at all! I love Lily's little jumper...
Hugz

Lots going on around the farm and with craft! love the stars, the Christmas applique is gorgeous and such a sweet cardie for Lily! xx

Such a gorgeous pattern for Lilys cardy. How wonderful that she loves pink and pretty flowers. Calving must be such a busy time for you both. Pleased you could find a bit of sewing gone to make the star blocks.

What a varied life! The baby calves look so cute - I guess they grow quickly!

I know what you mean about having only the two of you to do all the work! It's tough sometimes. I like your star blocks, but that Christmas quilt is fantastic!

There is so much going on! Love the stars as always and the Santa blocks look great together. That is such a fun quilt.
The cardigan is gorgeous. I love the way it has turned out in a single colour. I am still surprise d I did not recognise it. I had to laugh recently as our granddaughter is till wearing hers even though it is far too small now. Looks like I may be making another.
The farm sure is keeping you busy. Glad the water didn't get too high on the bridge. Looks like you had to be creative with the hot water! Love those calves!

Raewyn - I have said it before and I will say it again - I admire farmers and ranchers SOOOO much. The work is endless and involves crazy hours. My neighbors don't have quite as much on their hands as you do, but it's enough that I have a very real sense of what you have been up to. Wow! So many calves. It is a wonder you have time to do any stitching at all, but I am sure it is a welcome distraction! Enjoy your weekend.

The stars are looking **so good** and it doesn't take long to bang out a few more... although choosing which fabrics to use is often the longest part of the process. The baby cows are always so cute - something I'm sure you appreciate for the first few but I imagine they lose their cuteness the more there are!

Lily's cardigan is so cute, and love your stars. And those cow and calf photos take me back to another life, long ago! Love your quilting and farm pics, thankyou. And I am playing catchup this afternoon with blog reading.

You are one busy gal! Hope things dry out soon. I absolutely love The Santa, The Tree, The Turkey and Me! How fun is that??? Did you buy a kit or all the bits and pieces separately?

Anni's quilt is looking great......Love all the calf pics.....they are so cute and yes there can be such a size difference.....just read your last post and so so lucky with the wiring issue.........