It's been a while since I talked about my 2020 Temperature quilt.
I had thought I'd be working on it weekly but I had a couple of hiccups with it that have slowed me down.
This is the last photo I shared of it —
You can see, to the left of the photo, I started piecing a temperature scale of the fabrics I was using.

This is where I came to a screaming halt.
I decided I didn't like my scale - there were a few fabrics in it that didn't work. They didn't flow in a nice rainbow/colourwheel sort of a way.
And then Lockdown hit and I couldn't do anything about it.
Fast forward two months - last week I was able to sort my fabrics, sort my colours and top up with the ones I wanted to use instead. Luckily they were in stock at my lovely local quilt shop.

I thought I would spend an hour or so on Saturday getting it all restarted again. I cut a whole lot more 2" squares, pieced my new temperature scale (which will be part of the border), and set about remaking my blocks.
Because I'd rejected several fabrics and rearranged a few more, it was a case of doing some unpicking and, depending on the temperatures we had,  just about starting from scratch again!

In the end, I couldn't put it down and the other sewing I wanted to achieve over the weekend went out the window!
I've now re-done January — 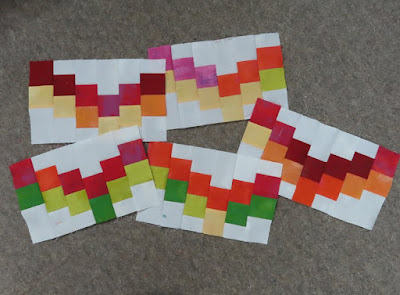 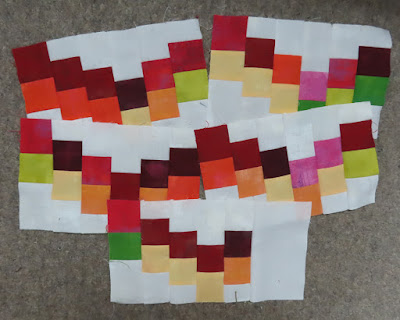 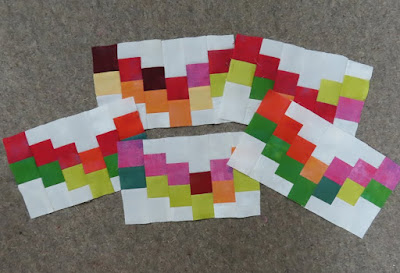 Here they are on the wall, with the revised temperature scale — 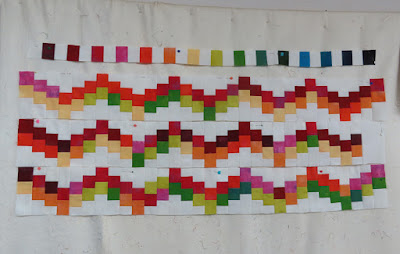 It may not look any different to many of you but I am a lot happier with it now, particularly when I look at how the colours work in the scale! 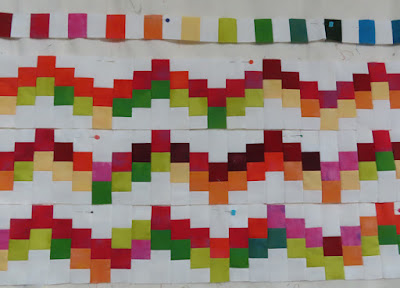 The highest temperature in these first three months is the deep red, which is anything over 28°. The lowest used so far is a medium green which is 10-11°.
(I discarded a purple and a light teal, and a dark blue I hadn't yet used. Rearranged the orange/pink. Added in another orange, added a different blue.....)
April-May are ready to sew — 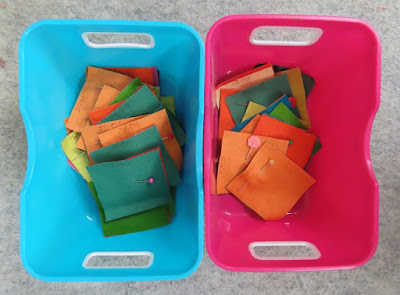 Now that I'm nearly caught up I hope to stay more 'in the moment' with this!

I finished another pair of slippers last week. The first pair I made were for George but were a little small, so Lily got them instead. Hopefully these ones will be just right for him. 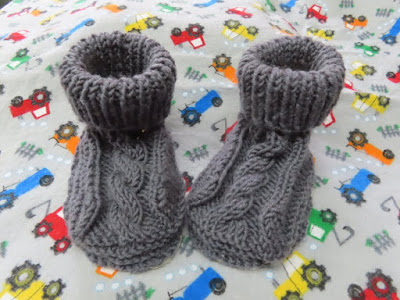 I was asked what I use for the soles. I used offcuts of sheepskin (usually purchased in scrap bags)...I had a few pieces in my cupboard and a friend gave me a few extra pieces. Cut out the soles and go around the edges with a leather hole punch. 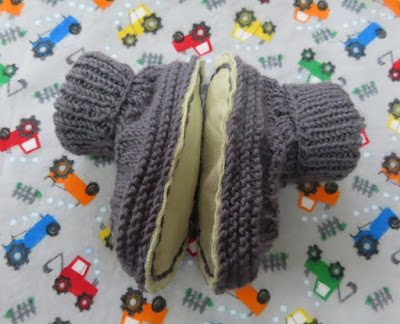 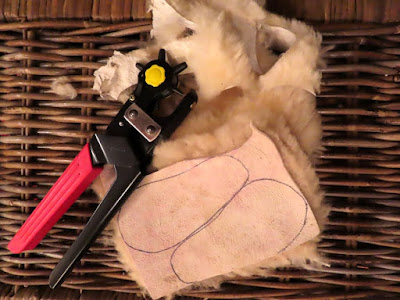 Excellent to have sorted your temperature quilt, now you are happy with the colours you will enjoy doing it more.... I love the little boots you make and they will be extra snug with the sheepskin soles...
Hugz

That looks like a lot of work to revise your temperature quilt, but it worked. I can't put my finger on exactly why, but the revised version does seem more pleasing to the eye.
Those slippers are awfully cute. :)

Your temp quilt is looking good, I like how the days of the week/month meander across the quilt top. Certainly a lot of work to unpick the earlier months, but you will be much happier now with extra fabrics to use, and look, three months done so far!
The little knitted slippers look so nice and cozy.

Gosh your temperature quilt will be lovely when finished Raewyn. Mum used to knit so many of those little sheepskin soled slippers for my cottage & they were so popular. There was a sheepskin factory not far from where she lives & we were able to buy pieces of offcuts to cut the soles - some of the pieces were quite large too. Your picture bought back memories.

Love the quilt..a lot of work in that!
And the wee boots, I remember making footwear for my offspring!! Nice work

That is a lot of work to resort your temp quilt Raewyn, the rows you have finished look good though. Love the little slippers, they will be so warm. My Mum had a hole punch like yours.

love your temperature quilt and that mouse!! the slippers wow to have sheepskin for the sole - great idea

I think it was worth the effort to make the alterations Raewyn, it's looking so good up on your wall now. The knitted slippers are so cute, and very warm no doubt with the sheepskin soles.

I am amazed at your temperature quilt! The wee boots are so cute xx

Oh your temperature quilt is awesome. BTW I love the rat at the bottom of the expanse of white with the temperature blocks at the top. Sweet boots.

That is a stack of work on your temperature quilt. It is looking wonderful.
And the slippers look so warm!! Hope they fit just right.

I wondered what happened to the Temperature quilt. Lots of work but great you are now happy with it and it looks great..
Hope George's cosy slippers fit this time...
Are they sitting on your backing fabric for the Trucks and Tractors ??

very determined effort with your temperature quilt - love that one shade is anything over 28...we would have a lot of that colour !!!
love the slippers...so cute.

The temp quilt looks great! I did one in 2016 from batiks(still sitting in the flimsy pile). I hit a glitch when I hit summer and realized that red batiks are hard to find, much less 3 variations of tone for the hottest temps. And it was a long, hot summer: 14 weeks over 80F, 27C.

Isn't nice to get back to a project that you wanted to work on --but life got in the way--
the quilt is coming right along there now though!!
We have had an unusual week here in Fl--
overcast skies all day--and lots of rain--yet muggy!!
Usually we get sunny days with thunder storms in the afternoon, then it clears off for the evening!!
the weather here really changed alot in the year I was up north--
I can't wait to get back to my sewing--my projects are getting stacked up like planes on a runway at an airport--waiting!!! (I am cleaning and decorating the apt this week-it is coming along nicely--but still alot to do--and it' just a little apartment!!!
stay safe, luv, di

This is a really cool (ha) temperature quilt! I would like to make one, but will wait until next year I think. I like Joanne's (Canuck Quilter) design. Wow, it's not cooling off too much in the nights still and you're into winter. Does it tend to stay around 10 or does it go colder? You know how I love those wee slippers! Amazing how much you get done, what with all the work a farm entails. :-)

I love the look you are achieving with yourtemperature quilt - the revised colours work really well. xx

This is going to be fabulous! My mind cannot even comprehend all that organization! Can't wait to see the finished quilt. Delicious!

Raewyn - at the end of the day, we each need to be happy with our "work", so I am glad that you have been able to take the time to get the temperature quilt where you wanted it to be. (You are not the only one that gets a bee in her bonnet and all else is set aside!)

As long as you are happy Raewyn, that is all that matters! I cannot believe you started over! You accomplished so much even if it wasn't what you had planned

Thank you for sharing your soul stuff. I see the inside has the wool still attached. Wish I knew where to get some here in OR, USA.

I like the changes to your temperature quilt......Do you not have many days over 28???

Love the layout you've chosen! The design really works well. And finding the right scale of fabrics is the toughest part for sure.

Those colours are amazing! I'm glad you've found a scale you are happy with - I thought the first looked good, and then seeing your new one I realised the new one looked even better! Have you got a few more colours in there too? Very cute booties x

I admire people who can knit things like slippers they are so cute. Looking forward to seeing your temperature quilt finished.