Day One of Lockdown

I cleared off my design wall this morning... my scrappy sprouts were up there but were taking up too much room. I'd left them there for motivation but I haven't had a chance to add to them.
They've gone onto the spare bed - no one will be using that for a while - so I'm hoping I won't forget about them - they really do need plenty of attention so that they can become a finished quilt. 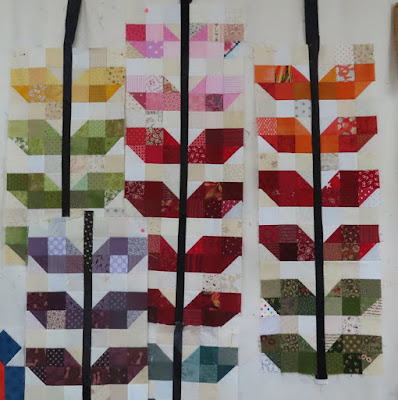 So the design wall looks a little different now. I was going to take everything off it but have decided to leave my Temperature Quilt blocks up for now. These are January's and February's blocks. March's blocks are in varying states of assembly but I do need another cutting session for them. 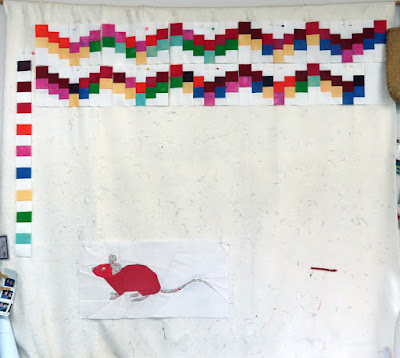 The vertical strip down the side is the range of colours I've used so far for my temperature quilt. Looking at it now, I see that it's difficult to tell that the top (hottest) colour is a deep red in this photo!
I was doubting some of my mid-range colour choices and was thinking about swapping some of them. Availability of new fabric will be an issue now so I'll just have to leave the colours as is!

The only other block there is my latest testing block for Juliet of Tartankiwi's Flash Cat Medallion. I showed the centre cat and first border recently, and here is the first block for the second border. 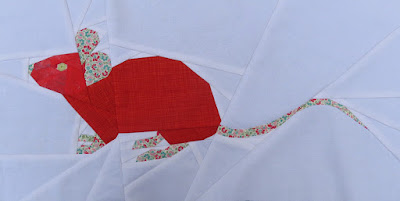 It was a fun make. I'm particularly pleased with the eye — 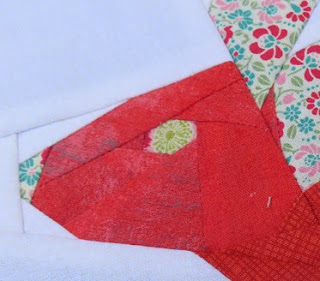 I started testing another mouse for her today; it's got the same snazzy eye but I won't have enough of this particular fabric left to fussy cut for the 10 more mice I'll need to make to compete the medallion. 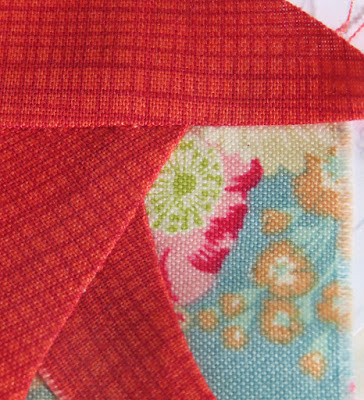 Here on the farm the MOML and I are already in lockdown as NZ tries to beat this Covid-19. Officially it starts tonight, after ramping up from Alert level 3 two days ago and now, rapidly moving into Level 4. Only essential services are allowed to operate - with stringent rules to follow. We will carry on farming as usual, but, naturally, we just aren't allowed to interact physically with anyone. Pretty straight forward for us as we don't employ anyone or have many contractors, etc, coming in.
In preparation though there was a bit of necessary contact with family yesterday.
One last stint of babysitting so ED could get some groceries - she'd been unable to do her usual on-line order. 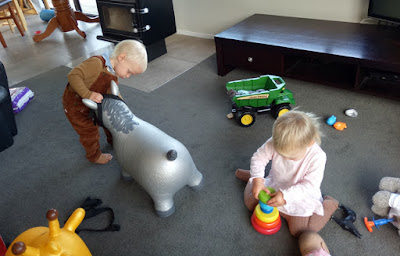 One last farm visit so YD and hubby could sort some necessaries for the next four weeks. 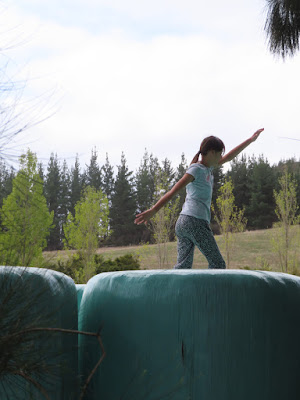 And a chance for the kids to stretch their legs and have a decent play. 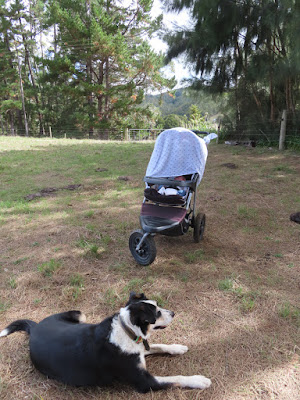 This morning I walked over the farm to catch up with my DIL. Social distancing in action here - there's a good fence between the paddock and the section so we can quite easily chat without accidentally touching each other.
And another barrier between us here - the trampoline net! 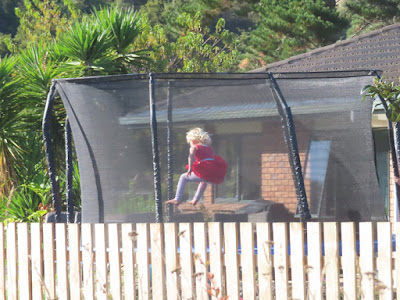 No more cuddles or hugs of all these lovelies for four weeks at least :-(

I've had a few requests for a tutorial for the fish block in my last post's quilt so I'll try to get onto that tomorrow,

In the meantime, take care and stay safe,
Happy stitches,

In times like these I am grateful to be a quilter, we always have something to finish or to make. Take care and keep well.

The restrictions are certainly strict, but I think they will be worth the inconvenience. Enjoy time in your sewing room.

I'm glad you can walk over to the fence to visit! that is very good - stay safe - love the mouse!

I do love your sprouts and the temperature quilt is looking fantastic. We are into week 2 of lockdown. With no family around us we keep in touch in the normal way by skype and speak with friends regularly too. The weather has been gorgeous and so we have been busy in the garden - I am sure we would not be so upbeat about things if it was raining! Stay safe and well. xx


it's good that you have plenty to doEven better that you can get close enough to see some of your family in person.
Stay safe and be well.

Fingers crossed the restrictions being in place so quickly means they will be very effective. The mouse looks amazing! x

lack of cuddles will likely be one of the hardest thing to bear.... I wish there was a stricter lockdown here and get it over with. Luckily we crafters have plenty to keep our minds occupied. Lovely quilts in the making there....
Big Hugz

We are similar here only I can't see my little people except on Skype. We have plenty to do but I feel awful not being able to help with the 2 grandsons 4 and 1 1/2 with their Dad trying to work from home. Their house will get rather restrictive as they love outdoors ( only a small garden ) and the beach which is now a no no. The 4 year old is easy to set tasks or play or learning for but the 1.5 year old not so much! Squabbles with certainly occur for them.
Stay strong and happy sewing.

Raewyn - it is hard enough for me being many states away from our kids; I can only imagine how I would feel if there were grandkids in the mix. How blessed we are to have technology to keep us in touch with each other! Wishing you happy stitching and good health.

Our grandson and his parents are only 25 minutes away across town, but we've been Face-timing with them for over 2 weeks now. Daddy works in a hospital and they are preparing for the big rush of cases to begin within the next couple of weeks. Over 200 in the city (where they are) and another 175 in the county (where we are). Glad you have lots of fresh air and space. That has to make it easier than being cooped up in a tiny house or small apartment. Stay safe!

Sew hard for you all not to have those cuddles and hugs but I'm sure you'll make up for them later,
I do like your Sprouts and the wee mouse is sew cute, Great fussy cutting for the eye.
Fabulous progress with the temperature chart quilt.

Love your sprouts and the mouse is cute! Love the eye! So good you can see the big twins over the fence, hopefully the lockdown will knock the virus on the head quickly and lives can get back to normal.

Dying to get my design wall up but still waiting on it to arrive in the mail. We've gone on lockdown here but, if you ask me, it's a pretty weak one. Fast food drive thru's and liquor stores are still open?? Well, thank goodness for technology: Facetime for family, Youtube for Mass and online doctor appointments! It's not the same but better than nothing. Certainly we'll all come out the better for this--appreciating and not taking so much for granted. But for now, we're all sewing away!

The no hugs part is extremely hard isn't it!! You have plenty of space to get out and about on the farm and at lease you can see the littlies even though you can't give them a cuddle.

Sprouts are looking good!
I really like Joanne's Temperature quilt design. Happy to see you making it.
Another amazing animal design by Juliet. I love the fabrics you chose. This is going to be such a fun quilt!
Oh, I am glad you got a last day in with some of the grands. We haven't met with our local ones for almost two weeks now, and the out-of-town family had planned to visit last weekend. However, with all this virus madness they decided to stay home. Wise, of course, but I sure am missing the hugs and fun!
I think I missed your last post. I will have to go back and look at those fish!

So many changes we have to get used to. Your comment about the spare bed not being used for a while was the same as us here. We decided to move a few things around because we knew it was going to only be the two of us few quite a while. I have set up a trestle table to use to sort photos and albums. Usually a difficult thing to pack up all the time but I am sure it will be able to stay up for weeks now.
We have kept in touch with our families with daily Skype calls. So grateful for modern technology.
Good luck with your scrappy sprouts and the temperature quilt.
Hope all goes well with the farm work, too.
Take care.

Lots of changes for us all. You look as if you have lots to keep you occupied and I am sure the farm will still be busy. Take care xx

Farmers are fairly self isolated to begin with aren't we. We're isolating too but our younger son and his family live in the the 2nd house on the farm and we're not isolating ourselves from them. They're really enjoying all the baking I've been doing. I love your sprouts, every time I see it, I think I need to start one. Blessings!