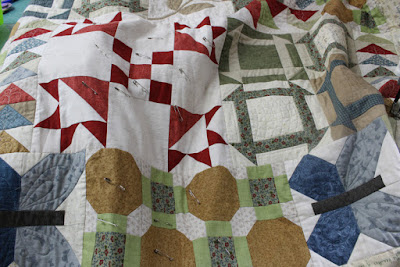 At the end of last week I suddenly realised that we were racing towards the end of the month and that I had committments to meet! I was sure there was still another week left in April!
First up, my One Monthly Goal (kindly hosted by Patty D of Elm St Quilts each month).
My aim was to pull out my Friday's Garden quilt and make some progress on the quilting...... hmmmm...... after precisely 3½ weeks of procrastinating I have done a little more on it.  I wasn't really sure what I was wanting on it, a bit of something but nothing too intricate. To get my brain cells working, I cleaned and oiled up my machine and continued on with a wee fill I'd been doing when I left off many months ago. At the time I wasn't too fussed on it but I've decided to carry on and I'll see where it leads me. 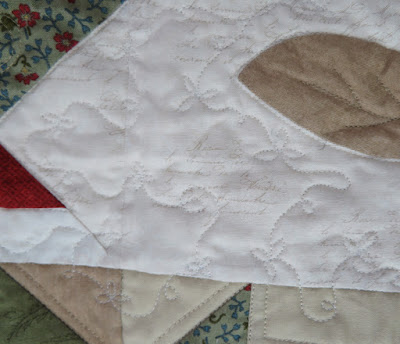 I know if I hadn't signed up for OMG, this quilt wouldn't have been touched so I call it a bit of a minor success; at least it's out and under the needle now. It's likely to be next month's OMG too so hopefully a few more gaps will be filled next time I report on it!

Another commitment I've had this month is my 'List of 12 item'. Some friends and I have made up lists of projects we'd like to work on throughout the year, numbering them 1-12. Each month a number is drawn and we work on the corresponding project. This is our first month so we're all bright eyed and bushy tailed!
#6 for me was my Omigosh! quilt (designed by the late Sue Garman). Started in 2016 as a way to use up the smallest of my scraps, I haven't seriously thought about it for a while.
This was one of my last shares; I'd sewn a few bit together to see how it was going to look. 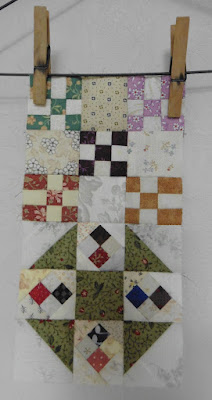 Since then I've sewn (many) strips together and thrown them in a box (!!). This has been one of my leader-ender activities.
You can see that I prefer to sew and trim later. When you are making 1½" (finished) sized 9-patches that is definitely the easiest way to go, although it does look rather messy.
From time to time I've done a bit of pressing and made a few 9 or 4 patches. And trimmed. But really, it was a whole jumble of bits. 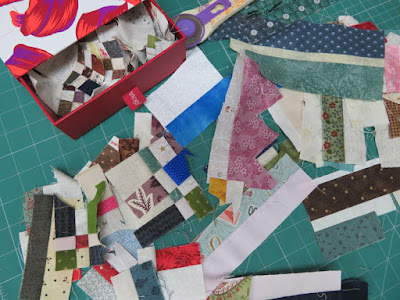 This month I've made an effort —
This morning I realised that I hadn't seen the pattern while I was sorting these this month so I had a little hunt... I found it in another container with a few more finished 9-patches plus a few cut pieces! Too many hiding places. These were the ones I made right at the beginning when I was making the 9-patches from one colour only. I'm making them more 'jewel-like' now. 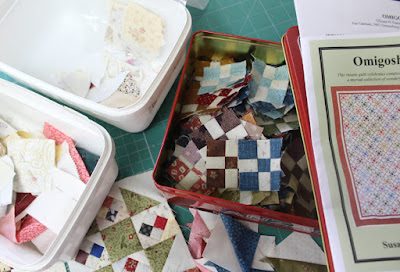 And I've sorted these out for my next leader-ender sewing. Sewing triangles to the 4-patches — 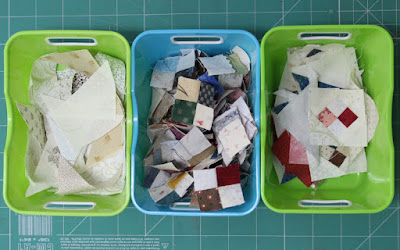 For April's OPAM (One project a month) I have two pairs of happy pants to put on the list. One for YD and one for her hubby. After mending cheap and nasty K-mart pants earlier this month (one ripped after the second wear) I decided they needed quality mummy-made pants. 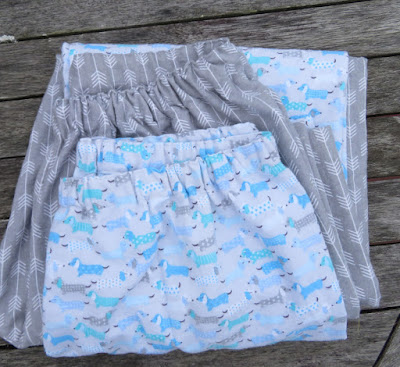 And I have another flimsy to put on the quilting pile! (Oops, once I've embroidered some nostrils and a 'nose seam'.)
I have built Eeyore to a decent cot-size so the calculations can stop. 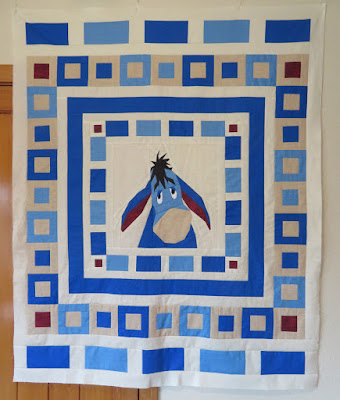 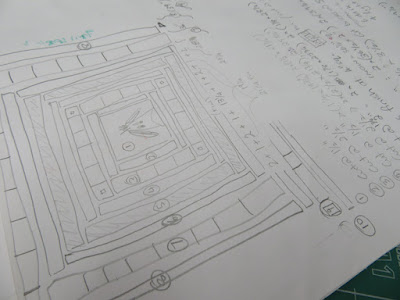 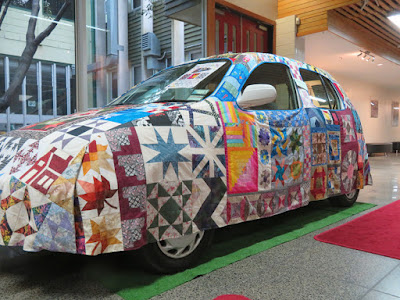 This past weekend the Whangarei Patchworkers and Quilters Club had their biennial show. It seemed to go really well with plenty of lovely quilts to look at. I spent much of my time there on The Country Yard's stall so, sadly,  really only had a rushed look around.
Luckily for us, Leeann of Quilt Whangarei has put up 3 posts (so far) of photos for us to drool over.


And so the month ends, thank you for reading along, and here's hoping you all have
happy stitches,

Sweet work on the fill in quilting.
You are sew patient working with those tiny pieces. I know how fiddly they are !
Love the way the baby quilt worked out..
Lots of lovely eye candy at the show.

Off to a good start on the quilting. Thanks for linking up with Elm Street Quilts One Monthly Goal.

love your OMG quilt pieces - this one has been on my list for a long time and I have never started it - maybe one day? I have another of Sue's quilts on my list as well - I keep telling myself I just have to finish up some other things first! I don't remember now off hand what is the finished size of the little nine patches - and the other block is called a shoo-fly isn't it?

Wow! What a month! Where do I begin? I’ve been working small, too, but not quite THAT small, and I’m smitten with your project. I can see why you have to be super organized with it being you leader/ender project. Eeyore is fantabulous! OMG! I just love him! Definitely drool worthy!

Lots of projects going on at your house--and some 'little' ones at that too--
love that car covered in a quilt--how neat is that???
Happy stitching--
enjoy, di

those teeny tiny squares look a challenge but so effective and worth it.... love the quilt you are quilting too.... yes, I find thinking is required to find fillers for all those spots....
Eeeyore is great... what is next that you are keeping the notes? Maybe you are going to be a quilt designer ...

Those are really tiny little nine patches! They look beautiful. Eeyore is looking great too.

I LOVE that car quilt.

You really got serious about your Omigosh quilt! I enjoyed seeing all of your little blocks. And I agree about making the blocks that small in a little larger form, and trimming them down.
That is one quilt I have always wanted to make, but have finally accepted that I probably never will. :)
Good of you to make the "happy" pants. Homemade from quality flannel are the best.
The Eeyore quilt is absolutely wonderful! Love the design you have added around the center to make it a usable size.

I love leader and ender stitching - you just need to be organised for it and have the pieces ready to go. It's amazing how much gets stitched while you are doing other projects.

Omigosh......I have that pattern too! Omigosh I don't think I will ever make it! I am making 3.5" 9 patch blocks as my leader & ender project and they are small enough for me thanks. Eeyore is a wonderful quilt perhaps for one of your granddaughters?

Love your 'eeyore 'quilt! Will you keep it?

So much to do and so little time!! Some months do slip away on us.
Love seeing Eeyore looking great. And well done with all the scrappy blocks.
The patchwork display looks great.

Eeyore is adorable, love him. Your leader project looks good too, all those tiny pieces.

Love all your creations Raewyn! Lots of fiddly work it seems. Love how eyeore is looking too ... & that car covered in patchwork! WoW! Some great eye candy this post Raewyn.

Lots of scraps to have fun with!! I think I need to make my kids "Happy Pants" I don't know what the make the cheapy ones out of, but they always rip in strange places very quickly.

Hi Raewyn you always do such beautiful work,i love Eyeore he is so cute,yes the quality in alot of clothes isnt there no more sadly,hope you have a lovely weekend my friend xx

Look how organized you are!! Love all the projects you are working on, you have lots of fun things on the go :) xx

Just visiting you from over the pond. =) Love all your pretties in progress...you are a very busy lady! I adore that quilt covered car...'tis amazing. So happy to happened upon your lovely place.

I love how Eeyore has turned out! Such a great size and pattern. You will never understand those pattern scribbles again - but working it out a second time is so much fun! Getting projects sorted out is so satisfying and I'm sure your new leader/ender organisation will keep you on track.

Those are TINY, and I could barely see them, let alone sew them. LOL The box of pieces looks so cute, though, and I know it will be wonderful. Eeyore is the best, and I really like your quilt. I'd have made him classic gray, because that's my favorite Eeyore. Still, he looks good in your blue!

That car cover is amazing. Thanks for the link over, I'm going to go check out your show. It's too bad you didn't get to stand and drool over things as the rest of the visitors did. I hope the shop had a wonderful experience and made plenty of money. It's those extra money makers that can keep things going.