But not in the same sentence...
I'll start with the Reds :-) I shared the sneak peek below in my last post — 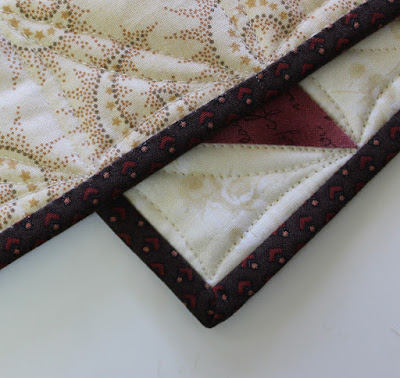 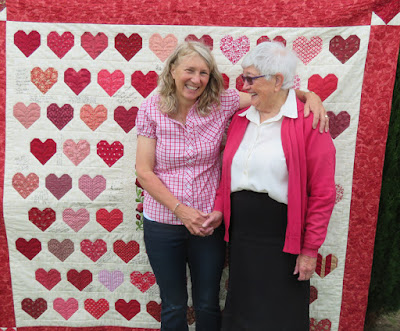 I was always going to come back and write a bit more about the construction of it but haven't yet had the chance.
I used the tutorial from Cluck Cluck Sew to make the heart blocks. 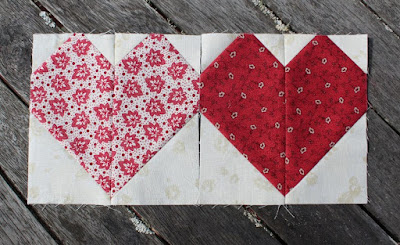 Rather than drawing 480 diagonal lines on my cream squares I used a piece of painter's tape in front of my machine foot as a guide. (The edge of the tape is lined up with the needle.) It cut out a lot of preparation time.
I eye-balled a second line of stitching so that when I cut off my corners I had a big pile of bonus Half Square Triangles.
I let them marinate for a few months then pulled them out for some Christmas sewing. I trimmed them all to the same size (these ended up 2 ⅜").

A bit of serious sewing later, I had a Leftover Hearts Table Runner. 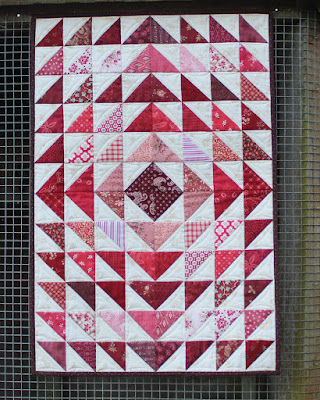 But of course it's priceless when you consider the time and love that went into making it!!!


Now on to the Black...
It's been said recently that if you want a bit of excitement, come and live on our road. We seem to have more than our fair share of drama out here.
Last week a fire broke out in the bush at the back of one of our neighbour's farms. 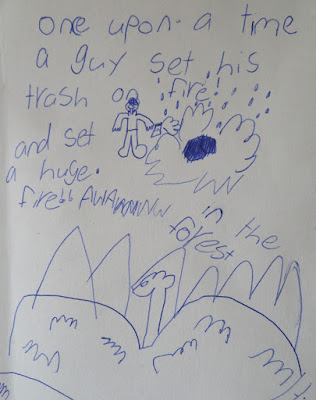 One beautiful thing about living out here is the bush that we are surrounded by. There are large areas of bush, all interjoined and belonging to a lot of different entities; farmers like us, private forestry, Department of Conservation, privately owned iwi land, Maori trust land, privately owned reserve, and so on. The key factor here is that it is all interjoined therefore fire can sweep through it all without any stops. Oh and it's mostly all landlocked too, with no road access.
Ground access to this fire was through farmland, but with a river and an unsuitable bridge in the way, helicopters with monsoon buckets were the only thing that could fight this fire.
Luckily there was little wind so it was relatively slow moving. 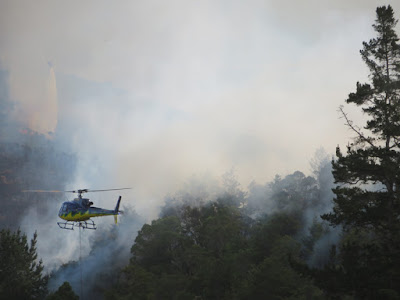 But when the helicopters had to stop for the night it was still out of control.
The next morning I went up the back of the farm and onto the tracks the beekeepers put in to access the bush. I saw to my delight that in the night firebreaks had been put in which stopped the fire from spreading over our way.


The helicopters were back in action; I couldn't see the flames from my vantage point, but did see plenty of smoke! 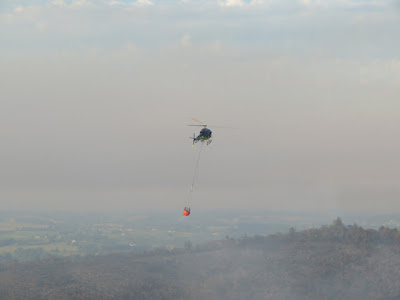 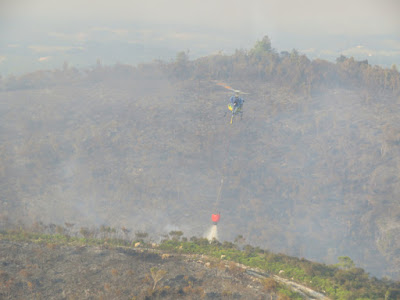 Thank goodness the wind stayed away and it was only a few hours until it was officially under control :-) I think they may have isolated an area and let it burn out?
On Sunday we had a trek up the back to show family what had happened. 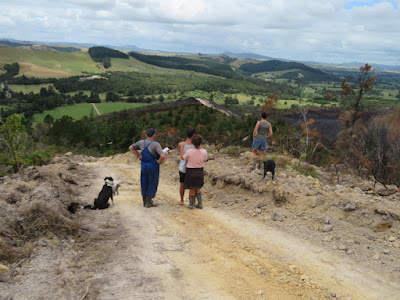 We had some good rain this morning so hopefully that has dampened down the last of the hotspots.
Sorry about the photo heavy post - I couldn't decide which ones to use and which to leave out!
Ok that's enough drama for now - see you next time

I love your Mums special quilt. How scary for you with the fires so close. Thank goodness the firebreak worked for you. Glad you and yours are all safe x

Oh how awful! Fire like that must be so frightening. Thank goodness for the firebreak and I am so glad the bees were safe. I love the table runner - such great use of your offcuts. xx

I love the runner made from leftovers. Bonus triangles are so much fun!
Wow--I was glad you shared all of those photos from the fire. Such anxious times! The firebreak did an amazing job. I hope things are calmer for you for some time to come!

Love your bonus project with the HSTs. I think it looks great.
That fir was definitely too close for comfort. I am pleased the wind didn't pick up and that it was able to be contained. It has done a lot of damage. I am pleased you are safe - and the bees, too.
We are in for a stinker tomorrow - 42c and a north wind. That is fire weather here.

I canNOT imagine the dread while observing that fire/smoke in the distance and with night coming! Our little farmstead is surrounded by poorly managed state hardwood forest that really is prime for an uncontrollable fire. I/we pray that it won't occur, but.......... I appreciated your photo documentation!!!! Take care, dear Friend.........hugs........

thanks for posting all the photos - that must have been a bit of a scary evening not knowing how close the fires were going to be to you, thank goodness the firebreak worked, I always love to see the photos from other countries.
I also love to make a quilt from all the left over bits be that a table runner or another quilt it is like getting one for free isn't it (other than your work of course!)

What an ordeal! Although Maine is 80% forest, we don't usually have the fire troubles that that do in the western US. I think it must be even harder in bush country. I'm glad you are all safe. And, I love the little table runner!

Oh wow, I'm glad you were safe.. bush fires are so scary... Like how you used the painter's tape to avoid drawing lines... good thinking! xx

Oh dear --first love that heart quilt for your Mom--great color combo's--and love the tablerunner you made from the extra pieces--how clever of you!!!
and fires are scary--and so easy to happen--so glad that it only burned the bush and nobody's homes or animals---
enjoy, di

Very scary having the fires so close, glad you were all ok. Sweet tablerunner, great use of leftovers!

What a terrifying experience for your community to go through, so pleased that your property was spared.

Love your mums quilt and the journey of the process. Very scary with the fires so close to you,wonderful to see the fire break worked so well.

Your Mums quilt is extra speical Raewyn and the table runner is stunning, the ultimate in using your scraps!! That fire must have been frightening, it was so good the fire breaks were out in. Thank goodness the bees were ok too!! Not too many photos at all.

Bush fires are so scary.... I do feel it's a shame more fire breaks are not routine - clearly they make a huge difference and I'm glad you are all safe....
Your red HST is just gorgeous..... great use of 'scraps'.... and I love that quilting... you are so even - did you use rulers?
Hugz

OMG.............you guys were so lucky! I hope no one, two legged or four were harmed. Lovely bonus quilt from the leftovers of your Mum's quilt.

A lovely photo of you and your Mum and her lovely quilt. The table runner is an absolutely lovely bonus.....well done!
Wow how lucky were you with the fire. We too are surrounded by grassland ( very dry) and lots of covenanted bush. Fortunately smaller blocks than you have, so easier access. Still very scary!

Sheesh... that fire looks very close and I am glad you are all safe...including the bee's... I also love your leftovers table runner...but what a wonderful gift you gave to your mum... she is so lucky...

Bush fires are so very scary. I am pleased to read that you guys were came through relatively unscathed. We had one burn 2/3 of our farm near Sydney when I was a teenager... and I don't think I have ever really got over that fear of seeing the sky turn orange. Maybe that's why I like now living in an irrigation area where the risk of a big fire is greatly reduced...

On a much more positive note... your mum's quilt is just so very beautiful. I am sure it is treasured.

Your runner is gorgeous! I have similar scraps to work from and am hoping to get to them soon! I intend to use them up as I go! Thankful the Fire didn’t reach your property, but so sad there was a fire at all!

Those fires are so frightening. We just had a big one here - about 114,000 hectares. They are especially frightening looking at night. Glad that they were able to stop it at the fire break and there were no winds.

I always love the red and white color combination in a quilt. Yours looks great.

Great scrappy table runner. Oh you forget that other countries experience fires like in the US. Looks terrifying, glad they go the fire break done.