What's on my design wall?

I glanced up at my design wall this morning and realised it was full of things I haven't blogged about yet. There's a post, I thought! 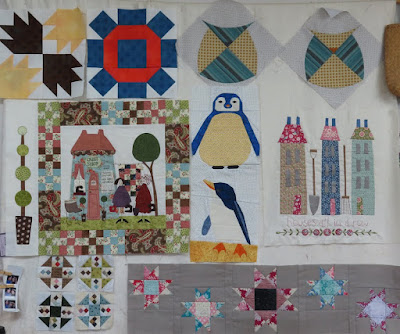 You may remember I was working on this block from Foxley Village. The handwork is complete. Yaay. There are pieced blocks to do but I'm waiting till the end to do those — 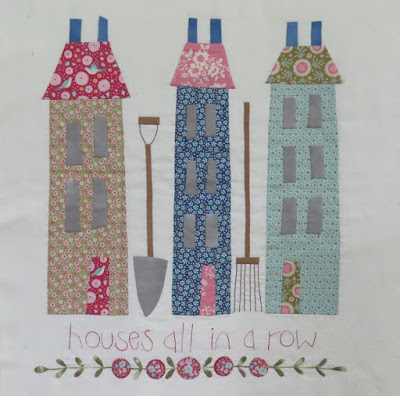 And here are three of the rows together —
Next up, there are a few more leader-ender churndash blocks made for my Omigosh quilt — 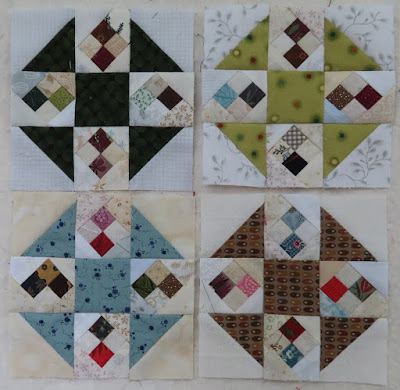 Something else I haven't even talked about is this project. Years ago (2011!!!!) I started doing the My Town BOM from the Homespun magazine. I made a couple of blocks and then decided I didn't really care for it so much. There were different contributors to the quilt and they didn't all seem to work so well together (imho). So I stopped. A few years later a wee group of us local friends decided to do a simple round-robin. Starting with a centre block, narrow borders, and ending up with a cushion sized piece or small wall hanging. I decided to use one of the blocks I'd done from My Town. Things happens, people got sick, and the whole swapping thing really slowed down and seemed to disintegrate. I was particularly slow completing a block I was working on, and refused to collect my finished bag until I'd done it...which really wasn't until earlier this year.
Anyway here is what I started with - the Quilt Shop block — 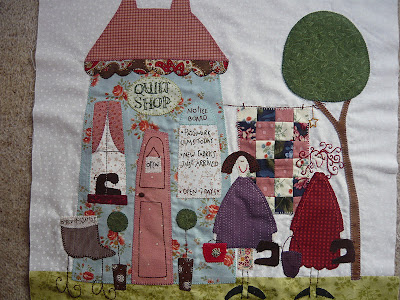 Two others worked on it and here it is now. I think it is pretty much perfect as it is and aim to just quilt it and put it on a wall in The Palace. (Thank you to the ladies who worked on this for me, I adore it!)
Next on the design wall are a couple of blocks from the grunge club we've been running at work. I'm going to sidetrack and make more of the Broken Wheel block as I've decided I love that one the most and think it will make an effective quilt. 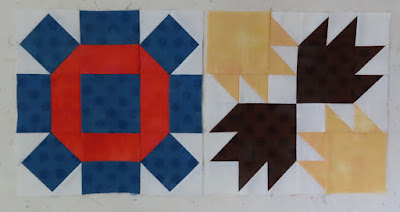 The Owls were a bit of a play before I got sidetracked (in a major way) with my International Sisters blocks. We'd been using the Sew Kind Of Wonderful QCR rulers at work for a class and some samples. I had one (unopened!) at home so wanted to experiment. I'll get back to these One Day!
(These rulers make curves so easy and fun!) 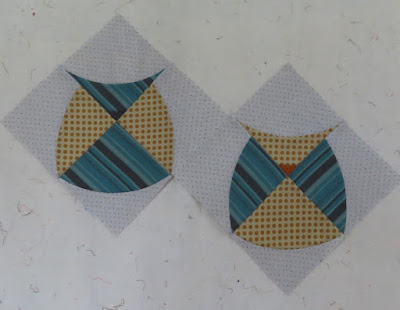 And last but not least. The Penguin blocks. I love to pattern test for Juliet of Tartankiwi. The Little Blue Penguin I've shared before, but not the Baby Chick. I squeezed him in between feeding calves a month or more ago and had forgotten to share his photo. Another cute pattern! 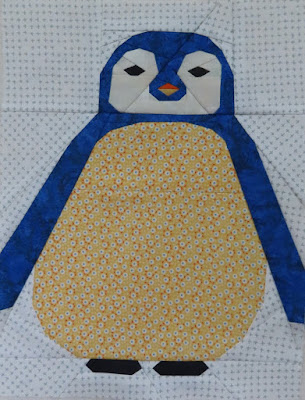 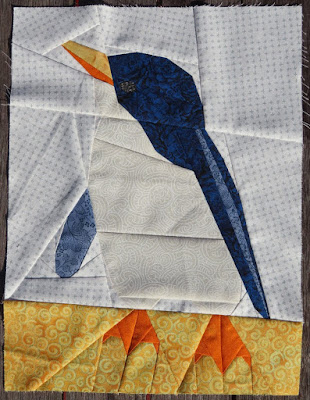 And speaking of calves (subtle segue?!) here's a pic I took this afternoon. I moved a mob of calves into the paddock next to the house so it's easy to sneak up on them with a zoom lens! 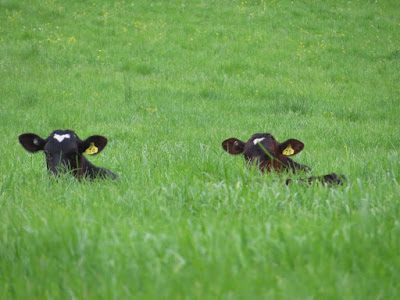 Whew, what a busy design wall full of plenty of things to keep me busy for months! Now that I have photographed and blogged about them I can put them away in their special places :-)
'til next time,

You have a lot of lovely projects on-the-go on your wall. Love that Our Town and Mr. Penguin is adorable...hugs, Julierose

You have many lovely projects. LOL your Round Robin I have never done one, but I was getting pinged like crazy by someone who was participating and they were just stuck on what to do next. Yours turned out lovely.

Wow, lots of lovely projects on your design wall!! I love that quilt shop block... but I do know what you mean by having many designers in one quilt and it not looking quite right... but I'm sure you can find something to put that lovely block in! xx

So many beautiful projects. Hugs

That is one busy design wall, but full of so much to love!
I could say something about each one, but then my comment might be longer than the original post. So I chose three--that is such a cute Quilt Shop block you selected for the round robin, and what was added to it is just enough. Perfect!
The last two are for the birds. :)
The owls are adorable, and not to be outdone in the cuteness department is the baby penguin. My goodness, that is such a great pattern!
I won't take up time or space saying how much I love Sue Garman's design (oh, I guess I just did). LOL

Oh what delightful projects--whether long time ago or fresh in the making--
lots of things to choose from to work on or to put back in time out!!!
luv, di

A lovely wall of projects.... its so fun having them up to be a reminder as well as look at them and see how they should go... I love them all...

Lots of lovely things to keep you busy. Which one will you choose first to work on, I wonder?

Wow, you have been busy ! :-)
I like your Foxley Village block,
xx

So many cute blocks. Great sewing!

So fun to have a peek at your design wall! The quilt shop block with its borders is so fun. And, of course, I love the little penguins! ;)

So many beautiful projects for you to work on , hardto choose which to do first.
How annoying having to unpick the RBR.
Sew cute those penguins and lots of work.

Lovely to see such a busy design wall, lots to choose from depending on where your mood takes you! The little baby penguin is so cute, and I love the quilt shop block!

Wonderful design wall Raewyn! Lots of inspiration there. I love the penguins and your quilt shop block is wonderful, I like what the other ladies have done with it. Great photo of the calves in the wonderful green grass!

All your projects are looking beautiful....hard to choose a favourite!

As usual, after lingering over your post and pictures, I want to jump right up before even finishing my morning coffee and get to work. I don’t know which project pictured here would be my favorite. The row quilt is simply divine! I love a well planned out row quilt, and this one is no exception. I’m between leader/ender projects right now and am quite smitten with yours. I think the first thing I’m going to do is get my little notebook out and jot down a few reminders so I don’t forget. Thank you for another delightful post, right down to the calves peeking out over the tall grass. Too cute!

Oh what fun! I love everything, but those penguins are really sensational!!

Well its always good to have plenty of variety - I started My Town too - though I set out to do only some of the blocks(I cant even remember how many I did now . . .LOL) - its all done & quilted...but there are so many embellishments to add.maybe 2020...

Lovely sight to see-such green grass. Chooky would be very pleased with that... :-(

Lovely post - it where at the Sopwell blocks? Ha ha. I am getting block envy from my quilting friends as I am working on the project.

Glad you can find time in your busy life to sit and stitch.

Phew! So busy, how do you keep track of it all?

A bunch of lovely projects... design walls are such a good way to keep track of them aren't they? That is, until they outgrow the space and need to be reshuffled.

What a lovely collection you have. So many different projects.
I think the penguins are adorable.
I do agree with you about the MY Town BOM. I know a few people who found it different to make the whole thing work. However, I love what has happened with yours and agree it looks just right as it is.

The owls are so cute in a subtle way. You have to look carefully to notice them. But those calves are impossible to miss. They are so gorgeous and regal in black standing in a field of green!!! Did you say something about the sisters??? I am listening.

You do have quite a collection on your design wall. They will all end up as great projects.