I've spent the last week or so trying to tidy up some loose ends...ie...finish some projects before starting something new.
In my last post I was working on two test blocks I made for Juliet of Tartankiwi; a Scottie Dog and a Basset Hound. I was turning them into cushions and was up to quilting them and their backs.
I finished the Scottie Dog last week — 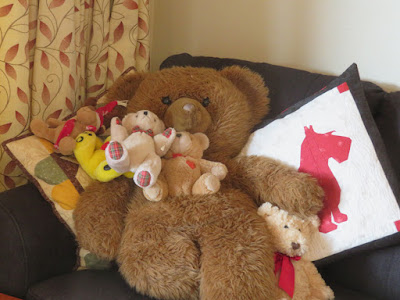 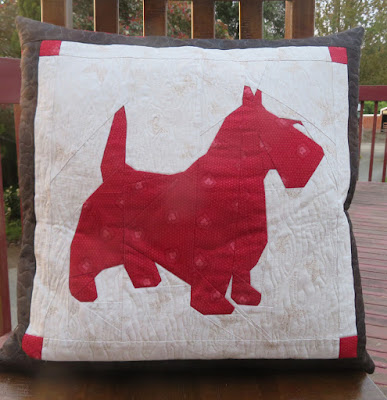 The girls tested it out for me and decided it was fine!
Today I finished the Basset Hound — 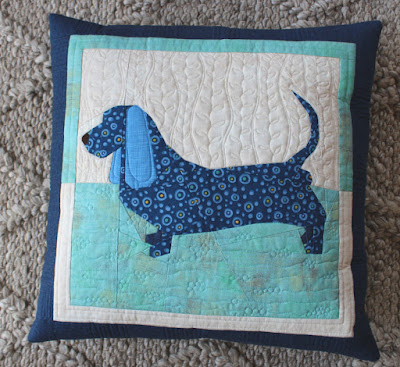 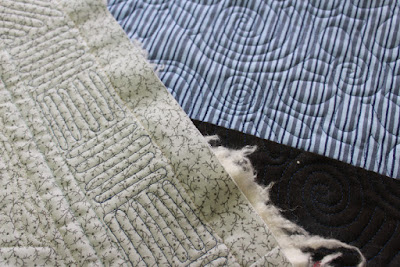 The flower and spiral design was inspired by Lori Kennedy's tutorial. I loved doing that one! (Quilting spirals on the stripes was extra challenging for the eyes!!)
I really struggled with what to put in the border of the Basset, but the alternating squiggles ended up working really well.

Another loose end I had to tidy up was to put buttons on Lily's cardigan.
Done, tried on and worn :-)

So yaay, another finish for the month :-)


I got a little distracted this week and 'whipped up' a tea towel.
Decorated some tea-towelling and hemmed it to make a tea towel, to be more accurate.
I used a washaway stabiliser for the first time and was very impressed with how easy it was to use. I traced the motif onto the stabiliser, peeled off the backing and stuck it onto the fabric, Stitch through it. Easy. 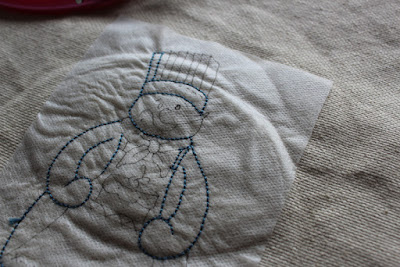 The stabiliser washes away.
The little motif is a Bird Brain design and I think he sewed up quite cute. 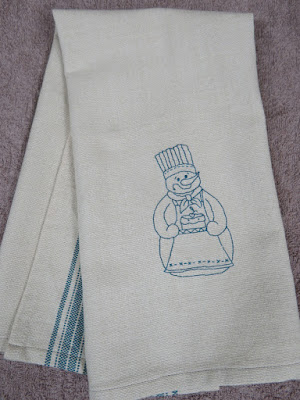 (Whoops I meant ot take a photo of the back to show how well I'd done keeping it neat; you'll just have to believe me with that one...!)
I'm cutting it rather fine for an end of month report but I'm nearly there, with less than an hour until the calendar turns over. I feel quite organised for once!
This weekend I'm off down to the Auckland Festival of Quilts Show. So I'd best get to bed so I can be up bright and early to pack my bags. I have one play day and one work day...it should be fun. And hopefully next post will be a report on the show :-)

'till next time,
happy stitches,

Friday Night and Saturday and Sunday

Somehow my Friday night post has become a Monday post....
I was pleased to take part in Friday Night Sew In this week. We'd had a busy week so crafting with online friends from the comfort of my armchair sounded just perfect :-)
My goal was to finish the spring cardie I started last week. It's a while since I've knitted in 4-ply (8-ply/Double Knit is my go-to yarn) so this one had more stitches and more rows than I am used to!
But by the end of Friday night I had got this far — 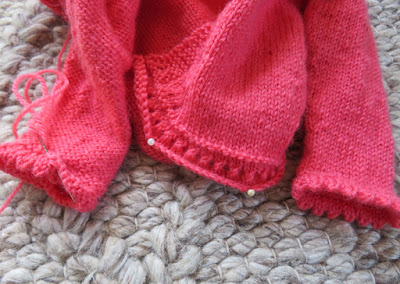 (Ever wondered how people get a cute little picot edging on knitted cardies? I had, and now I know....knit a row with 'holes' in it then turn it over and stitch it down.....)
By the end of the weekend, barring the buttons, it was done!
Thankyou to Wendy of Sugarlane Designs for hosting us on Friday night. You can visit her, and the link-up, *here*.
My plans for a sewing Saturday were foiled by two long power cuts - we'd just got back home after weaning another mob of calves when the power went off!! A couple of hours later it was back on again, but later on it went off for several hours again!
However, I finally was able to finish this Santa hanging — 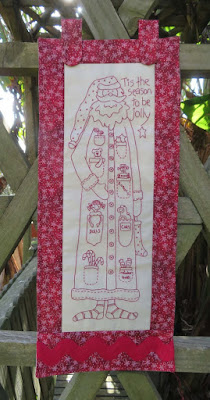 I didn't have much left to do on it and actually it still needs a couple of buttons on the tabs. I've stitched a couple of Xs in embroidery thread so it's useable and I'm calling it done (for now!).

I've stalled on quilting the Piglet quilt while I wait for another colour thread to arrive - silly me assumed I'd have the right colour in my thread boxes but none were right. (After making Mum's 80 hearts quilt this time last year I was sure I had enough reds/pinks to make do. No!)

Instead I've been concentrating on finishing my two dog cushions.
Have you ever made quilted backs for your cushions? Although extra work, they give the cushion a really nice finish. I decided to finish my two daog cushions with quilted backs so that I can have a fun time with some quilting.
Most of my quilting lately (not that I've done much) has been based around rulers so I decided to toss those aside and do 'pure' free motion quilting...fun fun fun.
During the week I'd sorted through scraps of fabrics and batting and made a quilting pile. I've decided to practise some different designs to those I've done more recently...sampler quilting really.
Of course I'm doing the backs scrappy and different coloured pieces mean different coloured threads so there's been a bit of changing and going between one project and another but I am making headway.
A productive weekend, on the whole :-)
I've shared photos lately of 'grandie time' - how lucky we are to have all our grandies living close by. We're currently baby sitting two more grandies while their mum and dad are away on holiday...these ones are the four-legged kind. Kit and Rollo are two big oversized pups! To say that it gets chaotic around here at the moment is an understatement but lucky for us the excitement of being at Ganma and Gandad's is wearing off and the boys have calmed down a little. After walks on the farm, they're happy to chill and sleep for long stretches of time.
Our farm dog Emma is the perfect older cousin for our younger dog grandies. Loves to play like a puppy herself but knows the rules and the routines and keeps the younger ones under control.
One last photo — 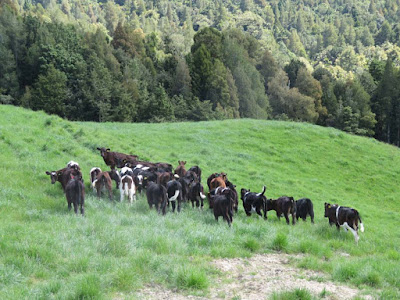 I mentioned weaning another mob of calves. I wrote about it in my last post but I've taken another photo so you can see where the weaner calves end up after that big long walk....
(You may be able to tell I love taking scenic farm shots!)

Have a great week!
Happy stitches,

Some days it seems like spring is well and truly here and summer is just around the corner.
On other days it feels like winter still wants us to know it exists - we even lit the fire this last weekend.
Luckily for the MOML and I, the previous weekend was a beautifully warm and sunny one.
Dairyfarming is a 24/7 occupation and time away for the MOML doesn't happen very often. Our three fabulous kiddos banded together and between them (and their own families and committments) made sure the cows were milked, the calves were fed and all the other animals were looked after so that we could have a weekend away. Some even made sure the house didn't get lonely and the food in the pantry didn't go off :-)
As we like to do, we headed up north. We went to Doubtless Bay to a fishing settlement called Mangonui. A lovely place to rest and eat and walk. 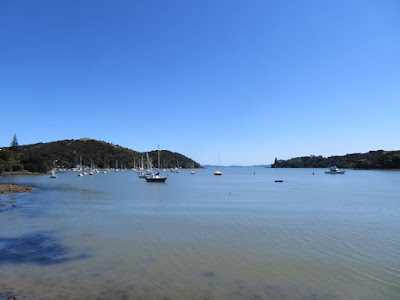 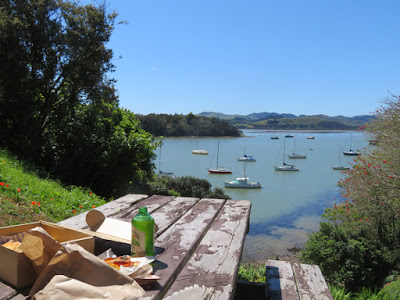 Many of the bays in the Far North are known for their swimming or surfing beaches. This one is slightly different with its rocky shoreline. It feels like it's carved into the hillsides and perched on the edge of the land. 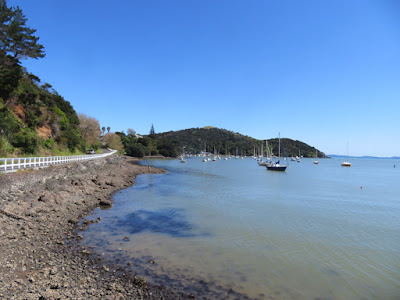 Of course before we went away there was a bit of planning to do. Lots of tracing so I could stitch all weekend. Yeah right. 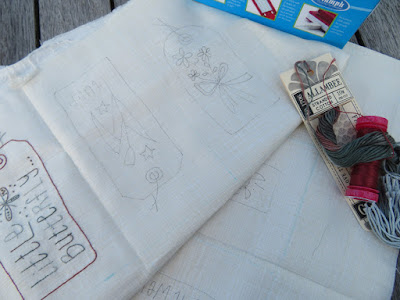 And we weaned a mob of calves to lessen the workload for YD. Weaned calves are taken 'out the back'...a 3 km track through the bush to more land out there.
First of all I get them to follow me as far along the track as practical...they follow the feeder knowing they'll be fed when it stops.
I did get a little stitching done while we were away. I often find the lighting an issue when I'm away from home and all my crafting comforts. This compact/foldout rechargable LED light was great. 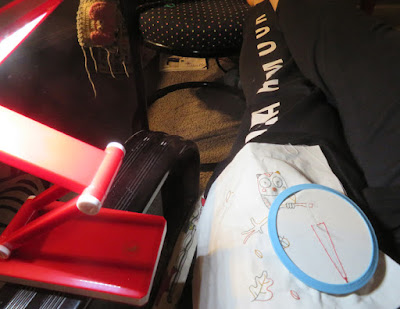 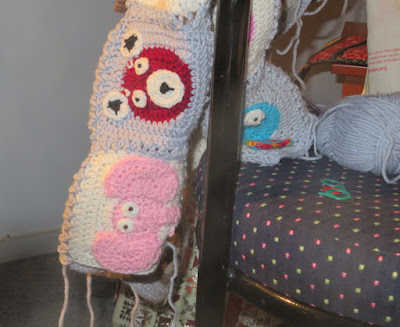 But I mostly crocheted - once I got into joining the zookeeper blocks while we were in the car I got the itch to get them done so continued on  - and then started on the outside edge. 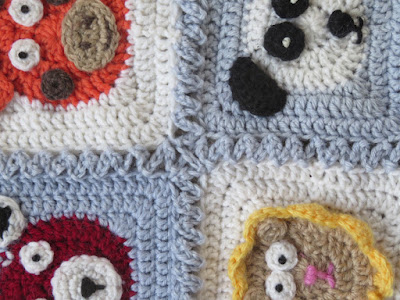 The joining stitch is OK. I think it will look better once it's washed and blocked. Maybe.!!! 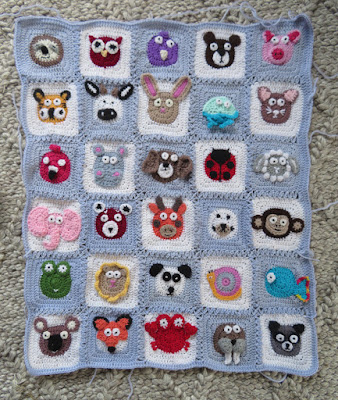 Last week I spent my evenings knitting this Sunnyside cardigan - ED requested some 'next size up' spring time cardies for the babies. Happy to oblige. 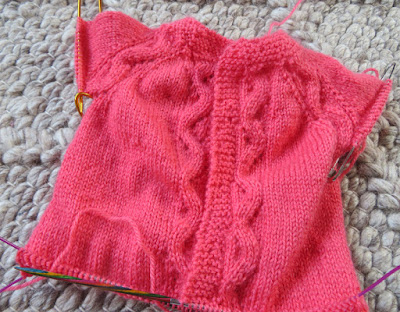 I'll leave you with one last photo of our weekend away. this was the view from our motel room — 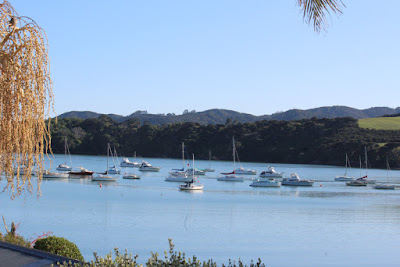 This week I've been getting a bit of sewing done - so who knows, I may have some quilty stuff to share next post :-)

Until then,
happy stitches,

Bits of this and that

Whoops, I'm a day late for my end of month blogpost, so this will just have to be my 'start of the month' post instead!
As seems to be my style lately, not nearly as much achieved as I would have liked.
I did complete the stitchery for this Christmas hanging — 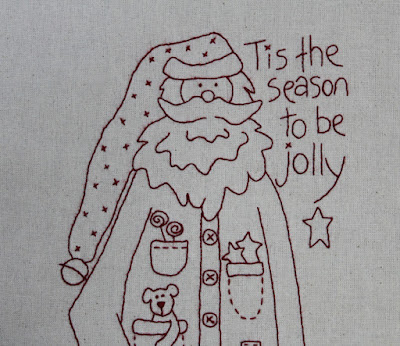 I also managed to spend an afternoon testing a pattern for Juliet of Tartankiwi. This Basset Hound had already 'been to the testers' but some modifications had been suggested and I got to try the new version out. (Juliet specialises in foundation paper piecing designs). Lucky me. I think he looks quite neat...pattern testing gives me an opportunity to play around with fabrics and a totally new/different design for a bit and I always enjoy it. 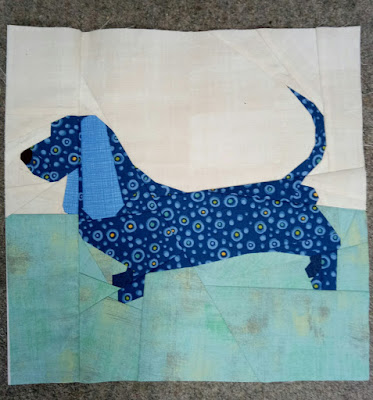 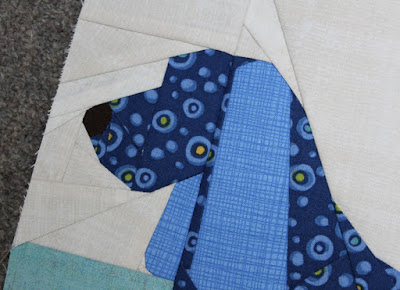 Last month I lined myself up with the goal of finishing my next baby quilt. I even signed up with Patty D of Elm Street Quilts' One Monthly Goal to help commit myself. Sadly, I just didn't find the time to get it done :-( but happily I'm closer to getting it done than I was then :-) Who knows maybe, this will be the month for a finsh!! 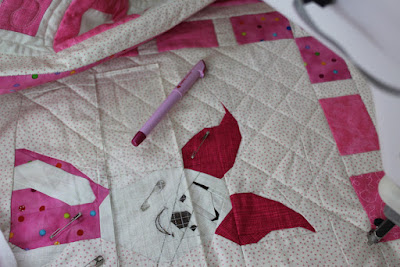 Last night when I had no more armchair stitching prepared, I picked up my Zookeepers blanket. A wee while ago I had started joining the squares using this method, (shown below) quite straight forward to do but with the slightly different sized blocks (both ED and I made them) there was a bit of buckling so I decided to try something that would be more forgiving. (And I'd decided I didn't want to sew them together with a needle; using a crochet hook was more appealing). 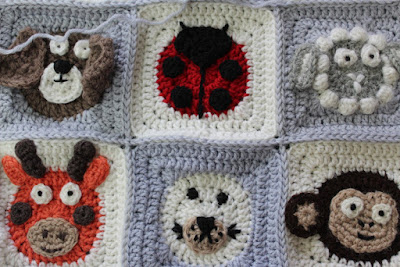 Last night I experimented with this join instead. Not sure what it is called and where abouts in the world wide web I found the idea but I'm much happier with how this is looking. It separates the blocks out a bit too, creating a larger blanket which I'm not unhappy about. 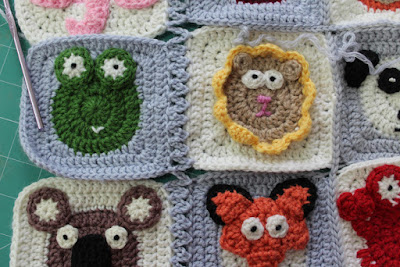 Aside from these few things, it's still all about Calves and Kids around here. We weaned our first lot of calves this morning (yaay! 11 down, 125 to go!).
You cant get much better than mornings like this —
Nor afternoons like this —

Until next time,
Happy stitches :-)