I think I've just got time to squeeze in one more post for 2016... I made a few things which haven't been shared yet —
Last post I showed you the beautiful gifts I received from Julie in Chooky's annual SSCS...here is what I made for Cheryl.
The decoration she opened earlier in the month —

And then her main gift. I made a block holder for storing projects in — 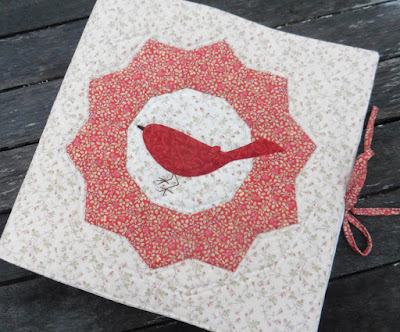 Another gift I made was this 'pin cushion' for YD. The original pattern was in Russian which made for interesting interpretation at times! It was also designed as a teapot cozy but I wanted it to sit on top of a jar which could be used for gadget storage. That meant a bit of adapting!! 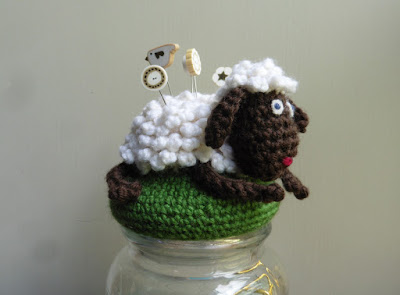 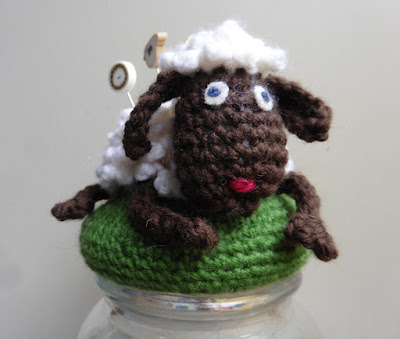 The green  is crocheted snugly around the bottom of the pull-off lid, then hot glued on. Hopefully it will stand up to a bit of use and doesn't come apart too quickly!
*Here* is the original pattern if  you are interested in trying this out; it's not as tricky as it looks!

I also made a few more kitchen things. You can probably tell from the kiwiana fabrics that these things were sent off overseas! — 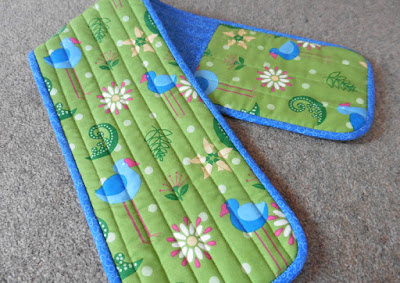 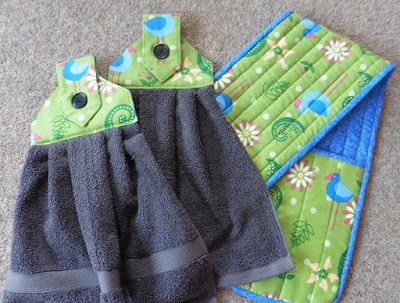 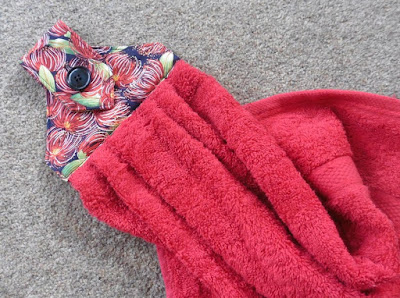 A few posts ago I shared about this runner I had made. My sister sent me this photo of it in use —

And I'll close with sharing this photo of Mum's lovely and mammoth effort this year....each grandchild received a set of ornaments....she did a monthly stitchalong through her local Embroidery Guild (I think). All together she made at least 28 ornaments and each child received 4 of them.
Tonight is New Year's Eve and we are looking forward to a nice BBQ dinner at ED's place. Cows to milk in the morning mean we probably won't stay to see 2017 in but I may just read until the New Year so I can say I was there!! I'm about to head off to the kitchen to make Ambrosia from the first-flopped-pav that was supposed to be part of Christmas dinner! No one will know it came out as flat as a pancake!!!


Wishing you all a safe and happy New Year's celebration, and a healthy and happy 2017. Hopefully with lots of quilting and sewing involved :-)
Thank you for following along this past year, I look forward to your company and friendship next year,

Oh Raewyn, what beautiful and inspirational handmade gifts you made. I hope you had a very Merry Christmas and you have a very Happy New Year, with plenty of time to enjoy and create.

so many great makes here the pin cushion is a delight and well done working from Russian instructions I struggle with English ones.You must be thrilled with all you have shared with us today.
The ornaments Mum made I know will be treasured by the grandchildren.
Like you I will not be partying at mdnight but no doubt will be woken up by the firworks.
Have a wonderful 2017 with lots of stitching and hopefully you will see lots of the adorsble twins both visiting them and them visiting you

You've made many gorgeous gifts 🎁... it's always lovely to receive something made with love ❤️...

Wishing your family and you a Happy Heathly 2017 🎉🎉

I LOVE the angel ornament you made! Can you please share the name of the pattern/designer? Happy New Year!!

love all the little gifts. Have a happy new year, sometime I stay up to see the new year in and other times I don't - just depends on how tired I am! have fun!

Happy New Year Raewyn! Thanks for sharing your projects through the year. This post, I've made particular note of the block holder. What a clever idea!

Wow, lovely projects Raewyn!
Your mum certainly kept busy with those lovely ornaments!
I especially like that block holder you made .... was it from a pattern?
We won't be partying either ..... I will be thinking of you, having to get up to milk the cows! Just like something from The Archers, tee hee!

what lovely goodies you sent..... Happy New Year... here's to lots of blog catch ups and maybe a real one too
Hugz

Handcrafted Christmas gifts and decorations are always special.
Happy New Year to you.

Lovely presents for Cheryl...block keepers are always useful, love the bird on the front...lovely gifts made all round - especially like the sheep pincushion, very cute. Your mum's embroidery items are gorgeous...lucky grandies. Happy New Year!!

Beautiful gifts all round - hope you enjoyed reading the New Yeart in - Happy New Year to you and your family - may it be good to you all!

Such beautiful gifts you made , your partner was very lucky . Happy New Year to you and your family and all the best in 2017 !

Lots of beautiful gifts there Raewyn, I love that sheep jar topper! Very clever to change it from the tea cosie. Your Mum's gifts are beautiful too, real treasures for the family to keep. Happy New Year to you all.

Lots of lovely gifts and your mum is amazing.
Love the kitchen sets 😊

Lovely gifts you made for the swap and I adore the sheep pinushion - brilliant. Happy New Year. xx

What a treat and feast of a post! Beautiful projects. I love that angel you made! And those ornaments your mum made for each grandchild-WOW!! Very treasured items all. That kiwiana fabric is SO cool!