When I went through my camera getting inspiration for my last post I realised that I had a couple of 'swappy' things that I hadn't shared yet.
Tatyana showed her thimble collection in a post and after I commented on the (great) size of it we decided to swap thimbles.
My collection is still very small as I only started collecting when I went to America earlier this year. (I was actually buying a thimble gift for a friend and decided they would be a cool thing to collect myself!!) I've decided just to collect from places I've been to; luckily I have spent 24 hours in Brisbane, on my way to visit my son in Queensland, so a swap with Tatyana was quite acceptable!!

I've also sent Siggy blocks to several people overseas.... when I realised that Jeanneke didn't have one single New Zealand one in her (vast) collection, I offered to send her one. Then Donna (no blog) asked to swap and Marga and I have also swapped. Marga's for me is still on it's way to New Zealand but mine to her has safely arrived in the Netherlands.
All three I have sent off have been the same design, although Marga's had a 3-D effect... I forgot to cut my stitchery on-point; you can just see on the photo below where I appliqued the centre to the background! 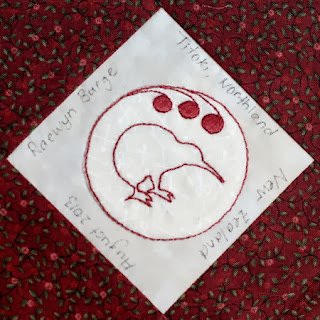 And a post about swapping just has to mention my recent postcard swapping passion. I participated in Sheila's postcard swap and was tickled to be paired with (the same) Jeanneke. We originally got to know each other through the 365-day photo challenge we did last year.

The theme for this swap was Autumn and what a giggle that we both had a similar inspiration!!
(I saw the pattern I used for my apple on Staci's blog, the confused quilter. She had made the cutest little pumpkins, but my mind's eye saw an apple instead. I was pleased to have a chance to try it out! The pattern for the pumpkin (easy foundation piecing) is found here, I decreased the size to make it suitable for a postcard.

JoAnne, the Patriotic Quilter, and I have also swapped postcards.
We recently had the MOML's nephew staying for a few days. He wanted a farm holiday so had lots of fun with the animals..... 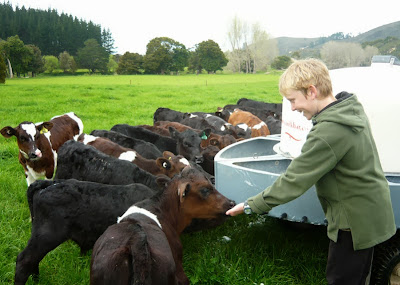 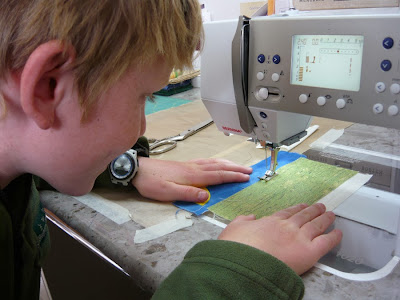 ...and got hooked on sewing. He spent his last 20 hours with us in a frenzy sewing postcards to send to his family and friends. He told me about 100 times how much he was enjoying sewing. He went through my scraps and took a bag home with him; hopefully he can use his sister's sewing machine to make more postcards :-) 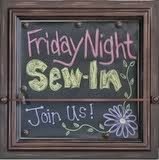 Tonight, as the third Friday night of the month, is Friday Night Sew In. I've signed up with Wendy to join in. Now to have a little think and see what I will be doing :-)
Thank you for visiting, happy stitching and have a lovely day,

such lovely postcards.. they are a bit addictive!
love the youngster sewing... so you are the influence it seems????
great idea to collect thimbles from where you have been...
Hugz

You are amazing!!! How do you pack so much into what must be a busy life?
Love all your swaps and seeing the pretty items you receive too. Thanks for sharing x

Love all the postcards/ and how great is it that you're indoctrinating the next generation! Maybe he could make your Christmas (post)cards?

Aaaaaakkkkk! That little apple is killing me with cuteness! Great job! Your swap partner must be thrilled to bits to see it! And I love the cross stitch one she made for you. What a great swap!

Aaaaaakkkkk! That little apple is killing me with cuteness! Great job! Your swap partner must be thrilled to bits to see it! And I love the cross stitch one she made for you. What a great swap!

Oh my, oh my!! What a wonderful post and wonderful events!!! What a hoot that your nephew loved to sew!! How fun - the postcards you've sent and received are awesome!! Love the thimbles - you had such great inspiration!! LOL!!!!!

Hugs across the big water!!

Great to see the young lad into sewing, more the merrier I say!
Great little swaps, the thimbles are cute.
Happy sewing this evening :-)

Hi Raewyn, your postcards are just SO lovely but I really love that your nephew wanted to sew & that he enjoyed it. How wonderful, I hope he continues. Actually the postcards are a real interesting project for him to start with as he can enjoy sending them to friends. Happy sewing tonight Raewyn, Julie x0x

Very cool seeing a young man at the machine! Thimble collection sounds a great one! I've organised an easy tea and about to hit the machine so joining in with the Friday night Sew in too.
Love Leanne

Thimbles are so fun--I have resisted collecting, but every time I see cute ones I weaken.
What lovely postcards! I was interested in the quilted postcard idea when I saw it on the SewCalGal FMQ challenge this year. That would be such a treat to receive something like that in the mail.
I love that the nephew was into the sewing. Very cool! : )

You have just been so busy! I love, love, love the apple postcard. Where did you get the New Zealand batik? Did you get a Nashville thimble?

Great post Raewyn. I love the postcards and it is great to see your house guest in front of a sewing machine. It will be great if he keeps it up. Have fun sewing this evening.

some lovely swaps here both made and received by you. Good to see the youngster so keen on the machine, maybe he will be a famous quilter in years to come, must nuture such talent and entheusiam

Oh that little pieced apple/pumpkin is just cute!! And how awesome to see a young one, and a lad at that, sewing his little heart out. You are a very cool Aunty!

Hello Raewyn
I love your blog and this post.
It's so encouraging to see that young boy interested in sewing - he obviously loves it so maybe we have a Kiwi Christian Dior or the like of the future!!!

I saw your blog on Leannes Cottage Tails blog - we Kiwi girls have to stick together!

I worked in the dairy industry for years and visited farms mainly in the Waikato - I'm now retired and really miss the farmer contact.

I'm a wannabe quilter - and I've started collecting fat quarters - have yet to make something - next year it will happen!

The postcards are all so wonderful , I guess you have caught the bug and so has your little guest , he looks like he is enjoying sewing very much . Great thimble collection too ! Enjoy your weekend .

My, you sure have been busy swapping! So fun! It's great to see a young man interested in sewing. I hope he keeps up with it.

love all those swap cards! they are so beautiful.
How does it feel to have a protege?
It's great to encourage and teach a youngie!

What a fun post! I love the x stitch pumpkin and your apple. I shall have to file some of those ideas away.

So much to see in this post Raewyn! Love all the swapping you've been doing lately, such beautiful gifts shared between friends. Isn't that so cool how much your nephew enjoyed learning to sew, great to see!

Hi Raewyn, lovely post. The postcards are gorgeous, and it is so much fun to have a younger person to share your sewing/craft with. My niece and and nephew (now 21 and 15) always wanted to do some sewing/craft with me whenever they came to visit. I am a collector of thimbles too, just started last year, it's quite addictive isn't it!? I have about 10 so far, many from around the world. I really enjoyed your post.

what fun postcards. I love seeing the young man getting excited about sewing.

It's so fun to swap! Sorry I still haven't posted about our thimble swap :)
Lovely postcards and it seems you have a new adherent ;)