I commented to a friend recently that Sewing was a distant memory for me at the moment. I did get my machine set back up after its service but that's about it.
However, I haven't been idle so I thought I'd give myself a boost by showing what I have done lately.
Some time before I went to my son's, I did another bit of pattern testing for Juliet of Tartankiwi.
It was for a re-relese of an older pattern —
Don't you just love this Scottie Dog? I do! 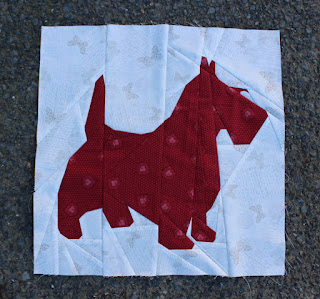 I was really happy with how he came up in these fabrics. I have grand plans to sew this one up into a cushion fairly soon..... 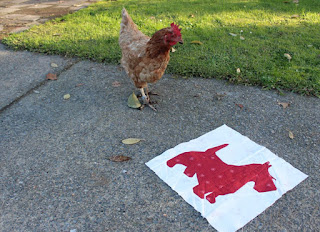 (Passing the chicken inspection)
Last week we had some good friends come to stay (actually it was the week before - that's how long I've had this post in draft format!!). They arrived in their campervan so didn't mind 'glamping' (as they put it) in our incomplete kitchen. Of course there was plenty of chat and laughter and some good farm walks - they brought their dogs with them; we were pleased it was fine-ish so we could enjoy the great outdoors. 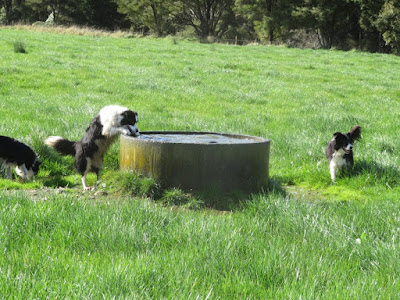 My friend always likes to bring crafting with her - she's a passionate crafter, and does a lot wider range of crafts than I do. Other visits we've done mosaics and hodge-podgeing. This time she brought a selection of her card making bits and pieces. First she made some bunting and then she got card making....... 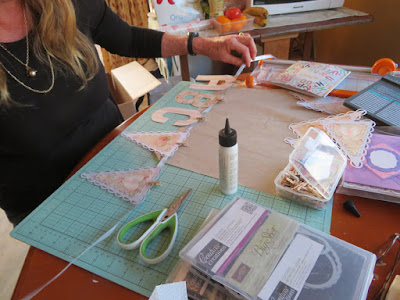 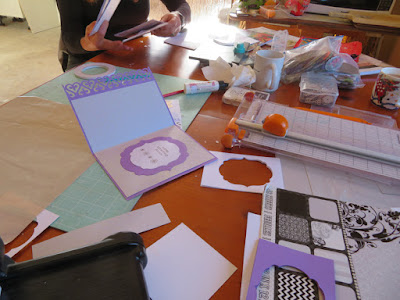 I watched and knitted the first night, but then got busy card making too. She had all sorts of fancy cutters with her - 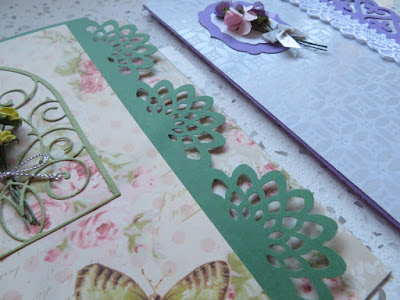 I made four cards in the time it took her to make over a dozen!!! 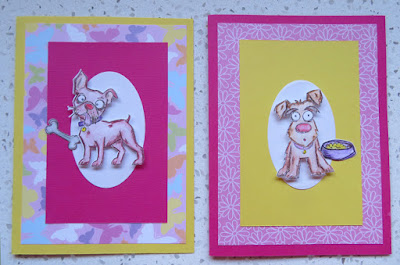 The dogs are stamps you colour in with pencils and then go over with a water brush. I made those two for the twinnie grandies who'll be 3 (yes 3!!!) at the end of the month.

It was an enjoyable visit :-)
Earlier in the month I made this pin cushion for a friend. It's called an African Star I think - a fun little make. 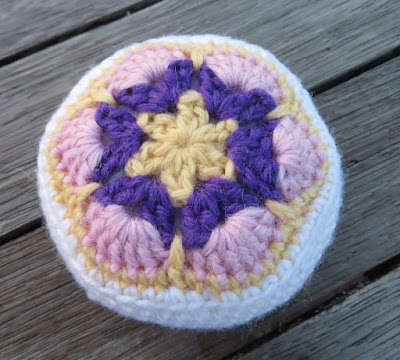 And YD is having a break from knitting dog jersies and made some booties for her sister. 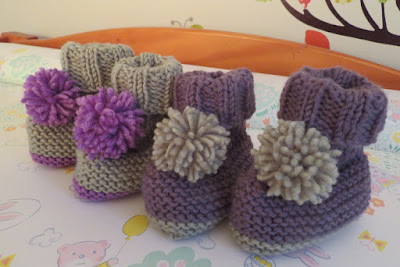 School holidays have been and gone. The eldest grandies came up to stay with their dad and YD and we saw a little bit of them. Here they are helping on the farm. 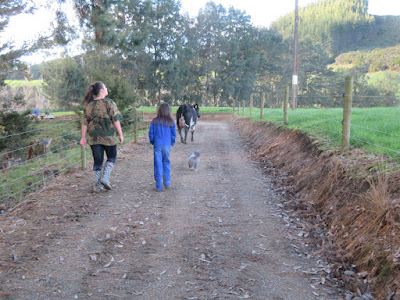 Yes, that is a new calver you can see (the MOML has the calf in the trailer around the corner, if you enlarge the pic you can just see it!). So our busy season has started.
Another night we went to their's for a Gourmet Dinner cooked by the girls. Gordon Ramsey Burgers, apparently! 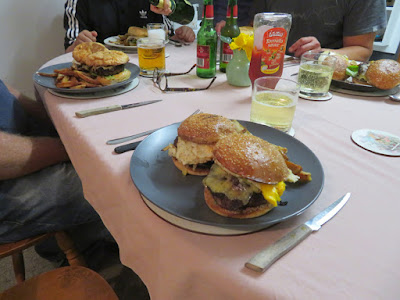 There was no way I could get through two burgers but I tried pretty hard - they were delicious!

Finally the other day, I got my two baby quilts basted...... 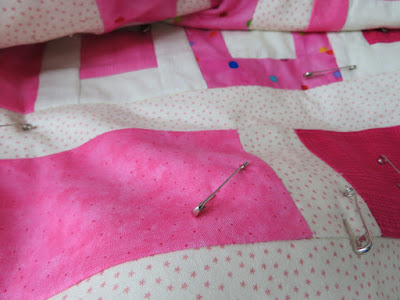 ...and have started on the quilting. 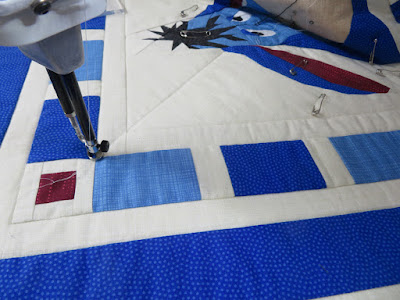 My plan was to have these completed before I went to Australia but you know what they say about the best laid plans?!! I guess I'm only a month behind schedule here; it could be worse!
My brother and his family are visiting from the US at the moment. It's the first time some of them have been to NZ so they are having an interesting time. Today they'll get to befriend some calves :-)
Thanks for persisiting to the end :-) Hopefully I'll be back with a proper quilty sewing post soon!

someone who does even more than you....how?!!

You have had a busy time, so could be forgiven for not crafting quite so much. LOL
I think even in a quiet time, you managed more than me.

making those cards sure look like fun - it is always nice when your visitors are into crafting too - those hamburgers looks wonderful!!

I can see why there is not much stitching happening - so busy with everything... I love the little cards you made and I'm sure the girls will be thrilled...
Hugz

You don't seem to have a minute to spare. Having visitors is loads of fun but always busy. How nice you got to craft with your friend. Love that Scottie dog and the pin cushion is a sweet design.

Big fan of Scottie dogs....so cute! I have a card making friend too and it is dangerous to play with all those neat gadgets lol! Cute cards you made. Love YD cute booties. Enjoy your special visitors xx

Love that cute Scottie dog being checked out by the chicken. :)
I used to do card making. But it reached a point where I just didn't have time to make cards when I needed them. Your cards are very cute. I'm sure the girls will like them.
Are you custom quilting the baby quilts, or doing an all-over design?

You have had a busy time, lots of fun with the grandchildren & likeminded 'crafty' visitors. Yes I too had a question re the GR burgers... what made them different? and were they extra good?

Time for me to get back into routine and check on your posts.
Congratulations on the arrival of the latest grandie. He was a whopper. And looks totally gorgeous! Hope everyone is keeping well and healthy.
Looks like you had fun with the card making.
The booties are a delight. And well done with catching up n the quilting.
I hope you have a lovely time with family visiting. How great that they are with you.

LOts happening in your part of the world Raewyn, those cards look wonderful.
I hope the US rellies enjoy their time on the farm. The little booties are very cute!! As is the pin cushion, love the scottie dog too, good to see it was chook scanned!! :-)

You do such an amazing job pattern testing Raewyn. And you are the only person I know with a chicken as a sewing approver. I hope she said it was eggcellent. I love all the crochet and crafty goodness - that pin cushion is really sweet. And I hope you've enjoyed your visitors. :)

You have been busy even if you feel you haven't sewn enough. All your projects look great but the scotty dog is especially adorable, as are the cards. Enjoy your trip!

Isn't it amazing when you get so busy that you just don't have time to write a post. Or hit the post button. Looks like you have been having plenty of visitors.

Even though you've been busy with visitors and other things you still mangae to do some lovely creating.
How cute are those booties you DD made.

Sweet Scotty dog! And a busy time for you! Having visitors can be exhausting when all is said and done.

Love the scotty dog. Your cardmaking is great. Love all the stitching, glad you got time with friends :) take care x