I spent some quality time with the bears over the weekend. Not the grizzly kind but I thought it time to try to catch up on the Mod Bear QAL by Sew Fresh Quilts.
First up - my completed pile of bear paw blocks - 28 of these for the lap quilt size —
Then it was sashing strips time — 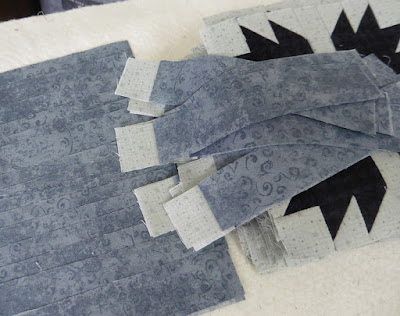 Next was sewing on the sashing and, yaay, lay out time!

I did make one change after sewing on the sashing as it is shown below. I unpicked a little and sewed the horizontal sashing pieces together, then joined the vertically sashed blocks together; more like joining in rows rather than blocks. (Apologies if that makes absolutely no sense; some of you may know what I mean!). I found that I could get a neater join with nesting my seams that way. 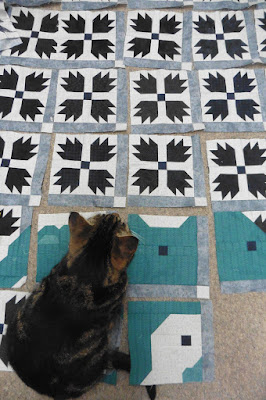 Then on to Scary Stuff, mitreing these borders —
(Lorna has an excellent tutorial for mitreing borders *here*.)

Press and look at it time —
And a closer shot — 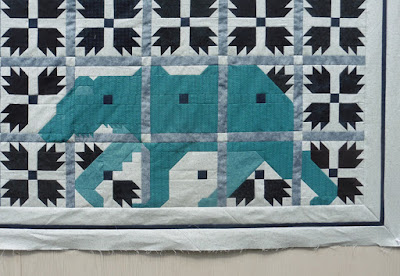 This looks like a complete flimsy but there is another border to go..it has pieced footprints which are a bit fun. Although it is tempting to stop here I think I'd like to grow it some more :-)

For now though I've tucked my bear away so I could concentrate on some Christmas sewing.

I haven't made one of these braid style runners before but thought one would make a nice gift. I found this good tutorial *here* on the Destashification blog. (This blog had two versions of the tutorial, the extra wordy one with lots of detailed explanations AND a bare facts only version..quite a good idea!) Rather than sew the strips to a foundation piece of fabric as instructed, I made it quilt-as-I-go by sewing the strips to batting and backing fabric. That meant once it was pieced there was no more quilting to do!
(I made mine slightly smaller too, with the starting centre square 6 ½" rather than 7½"). 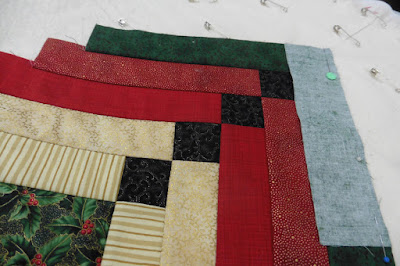 Here I had a whoops- didn't make my backing pieces quite big enough moment- saved by the Iron-on Batting Tape. 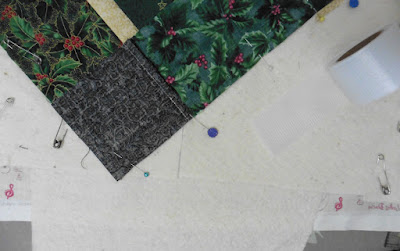 An enjoyable project, will definitely like to make another of these one day and play with a bit of colour graduating. 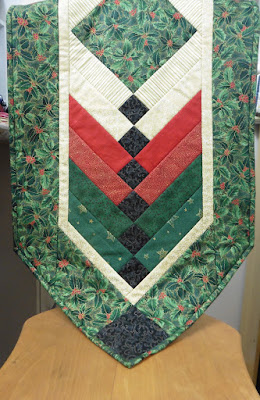 I must get a better photo - none of these show the nice gold sparkliness in some of the fabrics. You'll have to take my word for it! 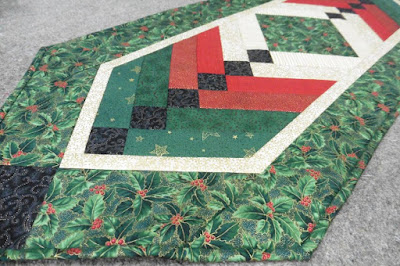 So that's one tick off my list. I've a few other Christmas projects planned but nothing too major :-) It's nearly December (15 minutes to go just at the moment!) - where does time fly?

See you next time,

Two excellent projects. Your bear is awesome, great colors! And that runner has me clicking the links, great idea to quilt as you go :)

Your bear is looking fabulous, Raewyn. The fabrics you chose all look so great together and really show off that handsome bear. Well done on the mitered borders! It really does sound harder to do than it is. And your Christmas runner looks so festive! I haven't stitched up any quilty gifts yet this year. Maybe I will give it a quilt as you go, too!

love your bear quilt and the blue bear is quite unique!

Wow...the Bear quilt is looking great. I also like the runner. Great fabrics!

The bear quilt is absolutely fantastic!! I am very impressed!
That is a fun looking runner. I like that you did it QAYG. Clever. : )

Oh wow, what a great color choice for the bear. I am really wanting to make another one scrappy this time. Might just consider a wild card color for the bear on that one! Thanks for the inspiration!

Ohh--I love your 'supervisor' on the bear quilt!!!
and the quilt is really neat looking--
love the Christmas runner--love Christmas colors--
love and laughter, di

Wow - your bear quilt is looking great. Wonder how fiddly the border bear prints will be to make?

I don't know what's wrong with me that I FINALLY noticed you changed the name of your blog. Nice!! I like it and the banner. LOVE the bear quilt. I've made some of those bear paw blocks before, they are so cool, and yours have the best fabric.

Love the bear, it looks so effective...good to see the Supervisor is on the job there too...quality control no doubt!!!! The table runner is amazing too Raewyn . Looking forward to seeing the border you do the bear quilt.

Hi Raewyn your quilt is amazing,love the bear and your xmas runner looks fantastic,well done my friend xx

Love the bear quilt! But I want to know how my cat got there to pose on it???

Look at that , you've pretty much finished the bear paw! I'm very impressed.

Oh I love it. Just fabulous! You must be thrilled Raewyn. Love the braided runner too xx

That bear quilt is awesome!

Bear paws looks amzing anfd the table runner too, much try the way you put it together have not done QAYG

Your bear flimsy looks amazing - I am looking forward to seeing the next border and I love your table runner, another for my to do list. Thanks for the link. xx

your bear quilt is fantastic.... and well done with the mitred corners - they look spot on... that's a lovely runner too.....
Hugz

Gosh Raewyn, that bear quilt looks just stunning ... you must be so happy with it. Just gorgeous. Your runner is pretty fab too.

Two beauties! What a neat idea to have the bear loping across the bottom of the quilt!

Your bear ( and paws) looks great. Love the colour way you have selected for the bear. Such a lot of work!!
The runner is delightful and how smart to make it QAYG!

Beautiful bear paw! I see your cat enjoyed you quilt, as did mine. It became a problem when I was trying to quilt it--she just wouldn't stay off! (She now sleeps on the finished one!)