The last of my Christmas sewing

As we speed to the end of the year, it's time I shared the last of the gifts I made for Christmas. I didn't make very many this year but had fun with those I did :-)
Last post I shared what I had received in Chooky's Secret Santa Christmas Swap... and here is what I sent. My recipient was Annette of Jindi's Cottage. I spent a lovely time stalking her and finally decided to make her a project folder, 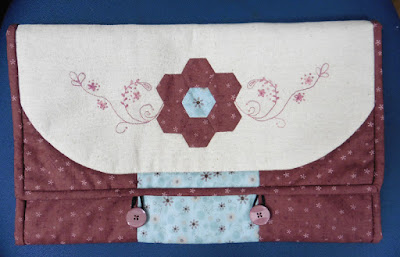 (The project holder is similar to one I made back in April)
Here is the decoration I sent to Annette. I adapted it from a design in Michelle's book, "A Holly Cottage Christmas" making it round rather than tag shaped. 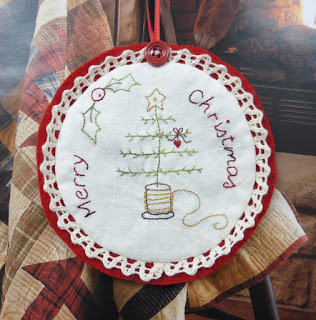 A special thanks to Chooky for organising this swap and for keeping us on track. Chooky's had a particularly tough time lately so her efforts are extra specially appreciated ♥

I have spent part of this year knitting some toys up for our babies, finally they were ready to post off for Christmas (I had intended finishing them earlier!). 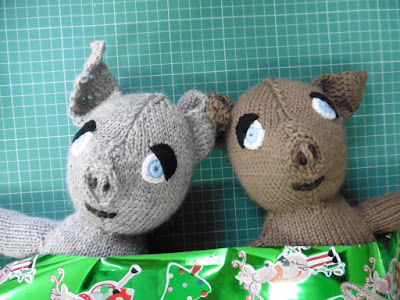 My Nana made one of these for each of most of her great-grandchildren and some grandchildren (there were quite a few) and lucky for me an Aunty still had the pattern. 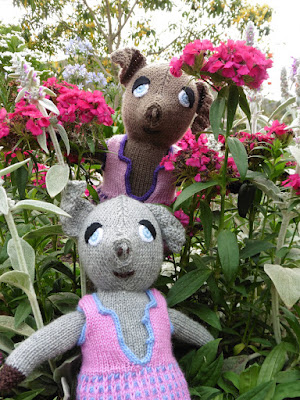 As you can see Raewyn had fun with the camera before sending them off to Australia! 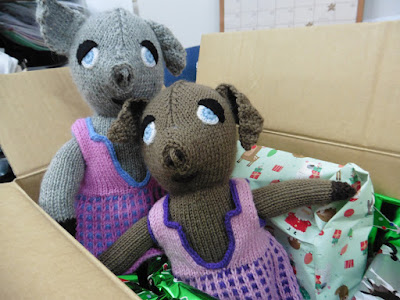 And below you can see my kiddies with their pigs (and other pets) about 24 years ago. I see Nana made the girl piggies knickers, something I didn't do...! I also decided to wait till the babies are older before putting buttons on their dresses.
The last of my Christmas sewing was a couple of cloth books, made from a panel which you slice up, sandwich with some batting and hey presto you have a book that will withstand chewing and grubby little fingers. You'll have to take my word for it that I made two, I just forgot to take the second pic. 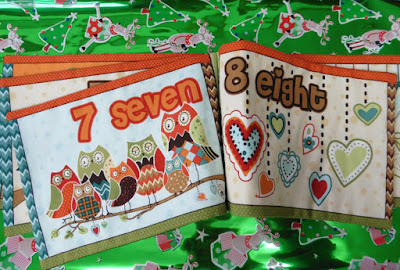 See you next time, happy creating
and a very happy New Year ♥

Lovely to see you continuing the family tradition of knitting the pigs. They are such fun.

You have been a busy girl! Love all your projects, esp. the knitted stuffies! How darned cute are they? Happy New Year! XO

You made such lovely gifts! Love them all! You've been quite busy. Hope you had a nice Christmas. Happy New Year!

Great projects--I especially love that little ornament and the piggies!! Oh, those are fun. How wonderful that you were able to use your grandma's pattern and make them for your grandbabies.

Great gifts! WHat a wonderful grandma you are.

I agree with Karen S. It is so nice to see you continue on with the family tradition of knitted piggies! Love their little trotters! The project bag is such a great gift. Like pincushions, I don't think a quilt maker can have too many project bags!

Love those little piggies! I also made some cloth books for my grandson...fun to craft some gifts! The project holder is wonderful, especially with your needle holder!

That is such fun sewing when you know they will be loved to death by little ones.

Love the gifts that you sent to your swap partner.

Love the gifts you made and those knitting pigs are lovely...making memories. happy New Year ! :)

Beautiful gifts you have made Raewyn...love that you are keeping the piggies tradition going.

Hi Raewy! wow I love the gifts you made for Annette,the project folder is gorgeous and how cute are those little piggies,I hope you have a lovely day my friend xx

Those little piggies are adorable! If you used pink yarn, with those eyes, they would look SO much like Piglet from Christopher Robin. Pooh. I love your project wallet. It's the kind of thing I'd never make but would love to receive. =) And that ornament is adorable, too. Lucky Annette! I always miss the sign up. By the time I think of it, it's way too late!

Annette's sewing folder and ornie you made are lovely...
How cute are those Pigs with their trotters and all. I am sure they will be much loved as wil their books.
Love the photo shoot and the one of your kids with their pigs and teddies...
Happy 2016....

Raewyn you make and give the most beautiful gifts! Your lucky swap buddy. Cute pigs for the grandkids. My daughters teddy had tummy 'surgery' several times as it's tummy disappeared from all the love and cuddles, I had to keep re stuffing his tummy! He's 23 now and still going strong! Love and cuddles do that.........and a some new stuffing :-)

very interesting seeing you do a lot more child likeable sewing these days!! anybody would think you are a grandma!! haha... lovely sewing and I love the project bag you sent Annette

So many sweet gifts! Loved the photo of your babies.

Beautiful - as always - Raewyn, I adore the little piggies you have knitted & how wonderful that you are keeping that little tradition going for your grandbabies. Wishing you a wonderful New Year Raewyn, may 2016 be a happy & creative one for us all x x x

The knitted toys for the twins are gorgeous, I am surprised you didn't pack yourself in the box with them!!

Lovely project folder Raewyn - the second I have seen today and I am even more determined to make myself one! The piggies are delightful. Happy New Year. xx

I love my project folder (and with the photo...you're welcome :)!) You stalked well, especially given my lean year of blog posting! The piggies are so cute, what a wonderful family tradition to be passing down...Happy 2016!...

Oh, I LOVE those little pigs!