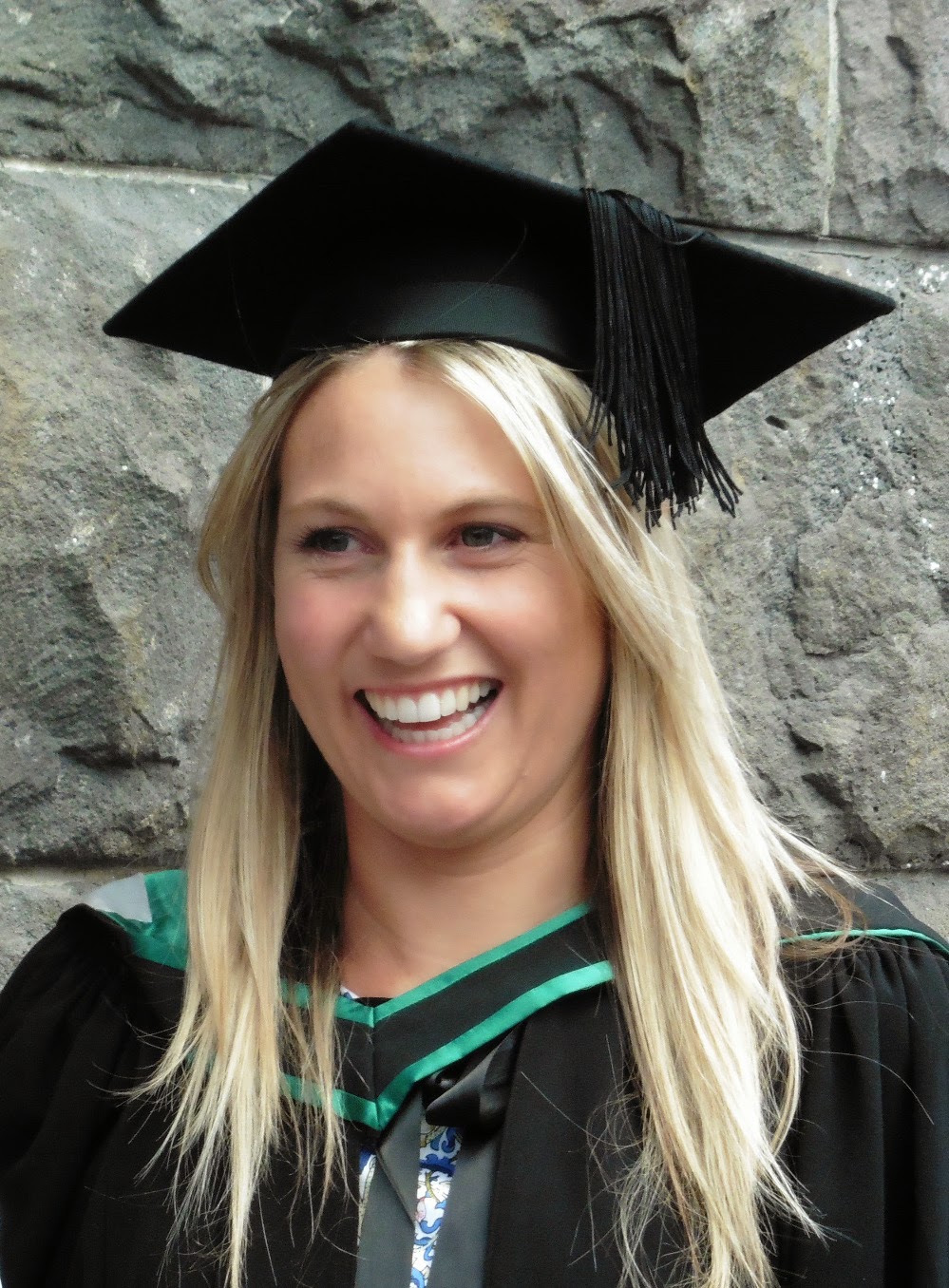 Once again I can report that we have been busy and I don't know where the days are going :-) We've just had a lovely weekend away, down at the big smoke for our eldest daughter's graduation. Of course there were lots of proud parent moments as she received her degree and became a 'Doctor of Chiropractic'.

More proud moments as she and her classmates took the stage to take the Chiropractic Oath and then when she received two major academic awards. It was a great day after 5 years of study, now she is back in the real people's world healing people. 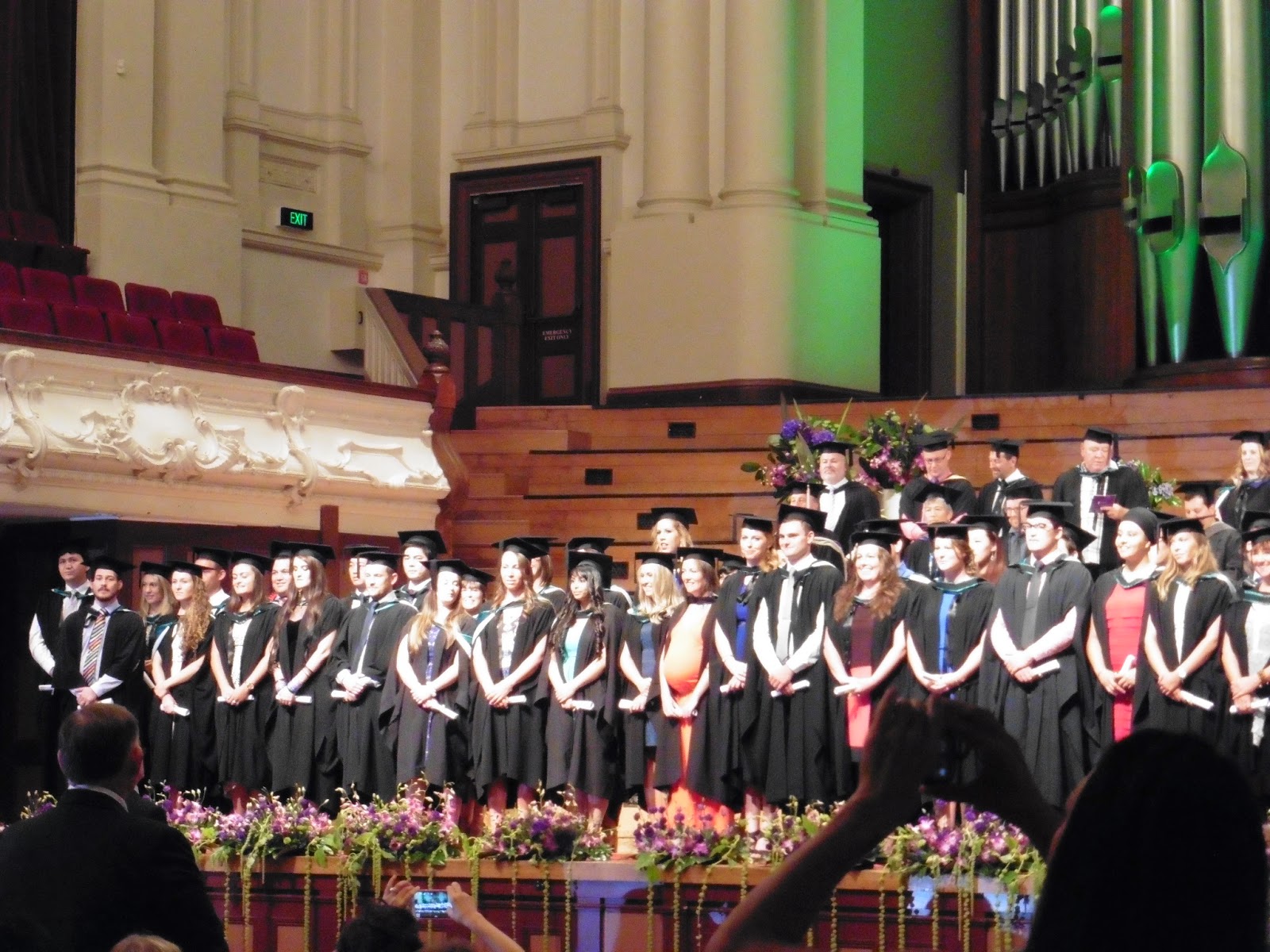 I recently took part in another one of Sheila's postcard swaps, a Valentines swap. It's a fun way to have a little play with fabric and machine. My swap partner and I are both waiting patiently for our cards to cross paths and land in their respective countries but I can show this extra card I made. Sheila let us know that Jeanneke was having a major birthday on Valentines' day. Here is the card I sent her. (If you click on her link you will see how varied the postcards she received were).
Last night our sewing group gathered for our Christmas get-together... yes, it's a little late but that's how it works sometimes and it was fun to do it away from the hustle and bustle of the real thing :-) It was a nice night and we exchanged secret Santa gifts. Here is what Kerry made me....

Thank you Kerry I love them both ♥
Leeanne was my recipient and I felt quite inadequate as this year all gifts were quite big (cushions and so on).... What I made for her was tiny in comparison!
This wee pouch from Yoko Saito's book My Quilting Life has always appealed to me and I know Leeanne likes dinky little things so hoped it would be ideal. It was fun to make but a little fiddly at times - insert a grin there! 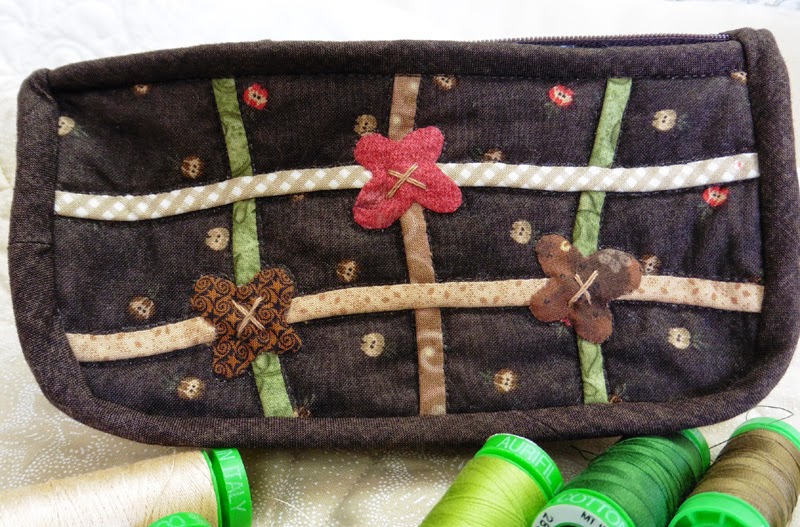 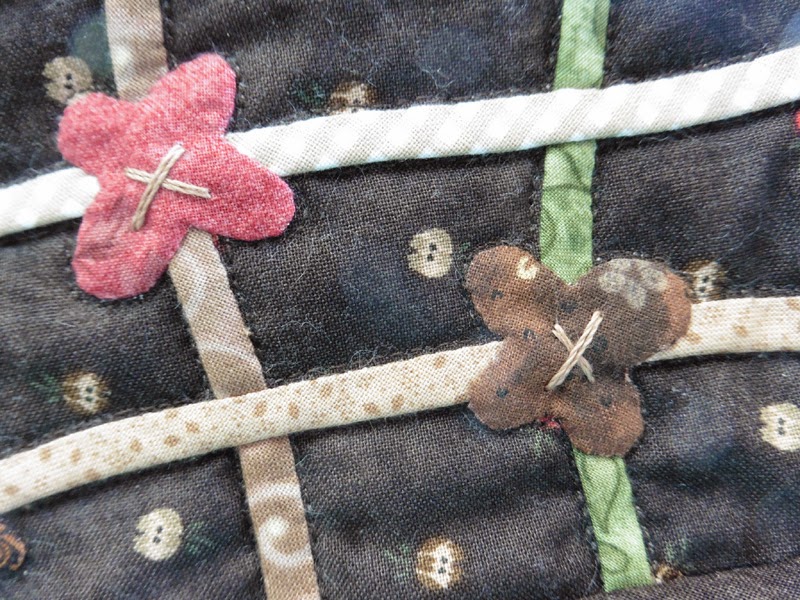 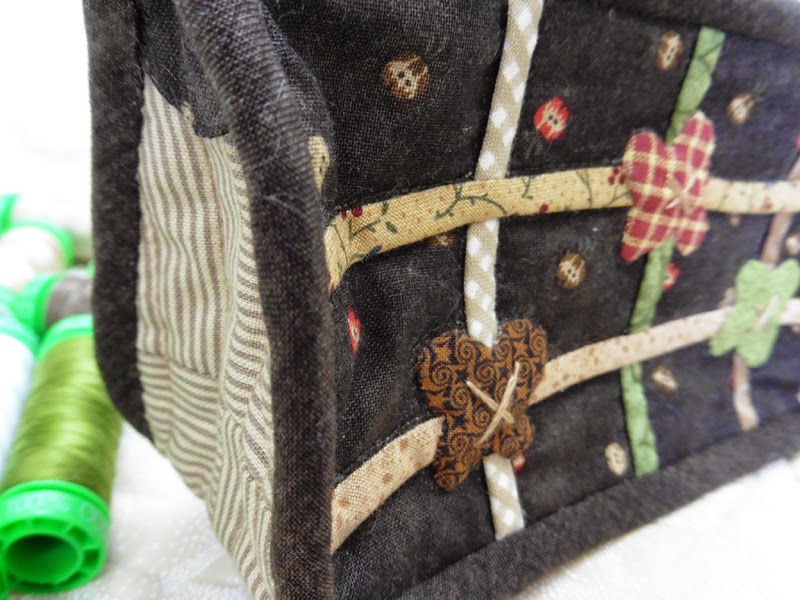 Friday Night Sew In is on this week so do head over to Wendy's to sign up if you want to take part. I feel like it's been a while since I had a REAL good sew... you know with foot down and thread everywhere so maybe I'll do a bit of that - or maybe I'll opt for the slow and calm approach and do some handwork...not sure yet, watch this space!
Until then, happy, creative, sewing,

Congratulations to your daughter! :0)

Congratulations to your daughter - and the parents!!

Love the little hearts and your 60th postcard is perfect.

Congratulations to your daughter 5 years of no doubt hard study but it has paid off. Well done her!

What a proud moment for Dad and Mum--and daughter!
Fun to have a Christmas celebration to look forward to just a bit later on. Nice gifts all around. I'll bet Leeanne was thrilled. : )

Congratulations to your daughter! I can feel you beaming from here :)
That's a lovely fabric postcard. I look forward to seeing the others once the arrive to their destinations.

well done to your daughter!
they look so much like you Raewyn!
lovely postcard and pressies.
How wonderufl to have christmas in Feb.

Congratulations to your daughter, what a fabulous achievement. Thank you again for my lovely pouch it is in my handbag with my lipsticks etc. It was a fun evening sharing gifts.

Congratulations to your daughter and to the both of you!
The presents for you are lovely, so is your pouch for Leeanne!
Have a nice week, Cisca

Congratulations to your daughter, a great achievement for you all.

Congratulations to your daughter.. Such a great achievement after five long years of study..

The pouch you made for Leanne is lovely. Great Christmas wreath and cute snowman.

Congratulations to your daughter! My wishes for a bright career!
Expect the great journey of our cards is a patience test. :)))
Beautiful seams.
Hugs!

Your daughter's graduation is not only huge, it's monmumental! Congratulations to the beaituful young graduate.

congrats on the grad!!!! Isn't it fun when children become finically independent! what fun sewing projects!

Congratulations to your daughter and you all. What a great start to the year. Love the sewing projects :)

Congratulations to your daughter and proud family. What an accomplishment! You did a wonderful job on the postcard and little bag. Well done!

Congratulations to your daughter Raewyn, well done! Both with graduation and academic awards. You have every reason to be very proud parents.
Love the postcard and the bag is amazing, lots of fiddly work in that, I bet Leeanne loved it.The wreath and snowman are wonderful too.

Another 'proud mother' momment in 2015, what a fabulous year for you thus far :-). LOVE the little Yoko pouch you made and can truly appreciate that 'fiddleyness' ~ lucky Leeanne and when it comes to Yoko inspired projects the only size that matters is 'teeny tiny' ~ R

congrats to your daughter... well deserved and best wishes for her future... lovely sewing.... a very fiddly little clutch and I love your postcard you sent.... cutest cute snowman and hearts.... have fun sewing tonight...
Hugz

You just don't look old enough to be the mother of two grown up girls, and gorgeous ones at that, just like their mum! Well done to your daughter.

Me again!
Congratulations to your daughter!
Thanks for reminding me about FNSI - I signed up too.

Congratulations to your daughter. Such a lot of hard work and she has reaped the rewards. Well done!
Your Christmas meeting looks like fun. Love your projects.

Wow! Congrats to your daughter. We are just embarking on Psychology with honours as an undergrad this year and will move our eldest nearly 4 hours away on Monday. DD1 is aiming to end up in the field of Neuro psychology so I can see many uni years ahead of us too. Hope you managed some stitching for FNSI and love the swaps and beautiful sewing.

Congrats on your daughter's fabulous success :) Lovely postcard! What a wonderful wreath! And that snowman seems a very happy fluffy chappy! I love the pouch you made. I'm sure as a crafter herself, Leeanne appreciated the workmanship :) It's tough sometimes when comparison seems to leave you short- yet a small and very well crafted and thought out-'specially for me gift is my pick every time :) 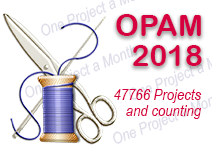