Since finishing my Red and White quilt top, shown last post, I have been feeling like a lost soul in my Palace; you know that feeling you get when you've been pouring lots of energy into something that is now ended?
That doesn't mean there isn't plenty to do, there's ufos, wips, qiw (quilts in waiting) galore, it's just taking me a while to work out where to start!
After a bit of dithering, and thinking that maybe a jolly good tidyup would help, I noticed my butterfly block lying on the bench. Rather than putting it away I got Proactive and made it into a cushion.
I made this block for the Butterfly challenge by Juliet of Tartankiwi. (More detail shown on my blog *here*) 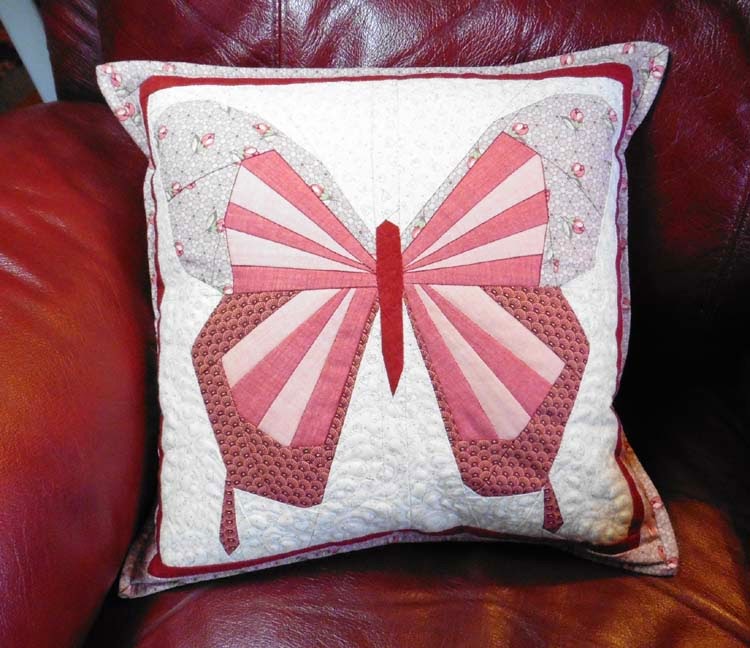 Borders, some quilting, an interesting back all made this a fun little project. I finished sewing the cushion binding down on full moon-eclipse-blood moon night. What an exciting spectacle it was. There's a couple more photos on my 365 day blog *here*. 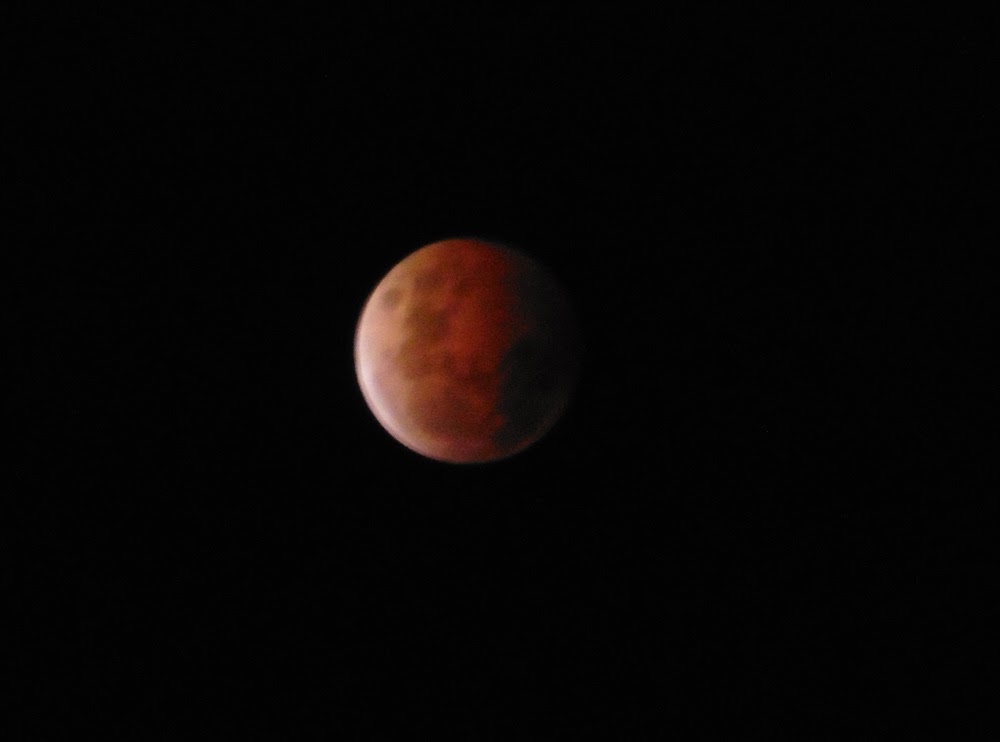 Then, more dithering, but luckily DH's 12 year old nephew had come to stay and I was able to stall some more. He visited about this time last year. As well as doing motorbike, calf and farm things— 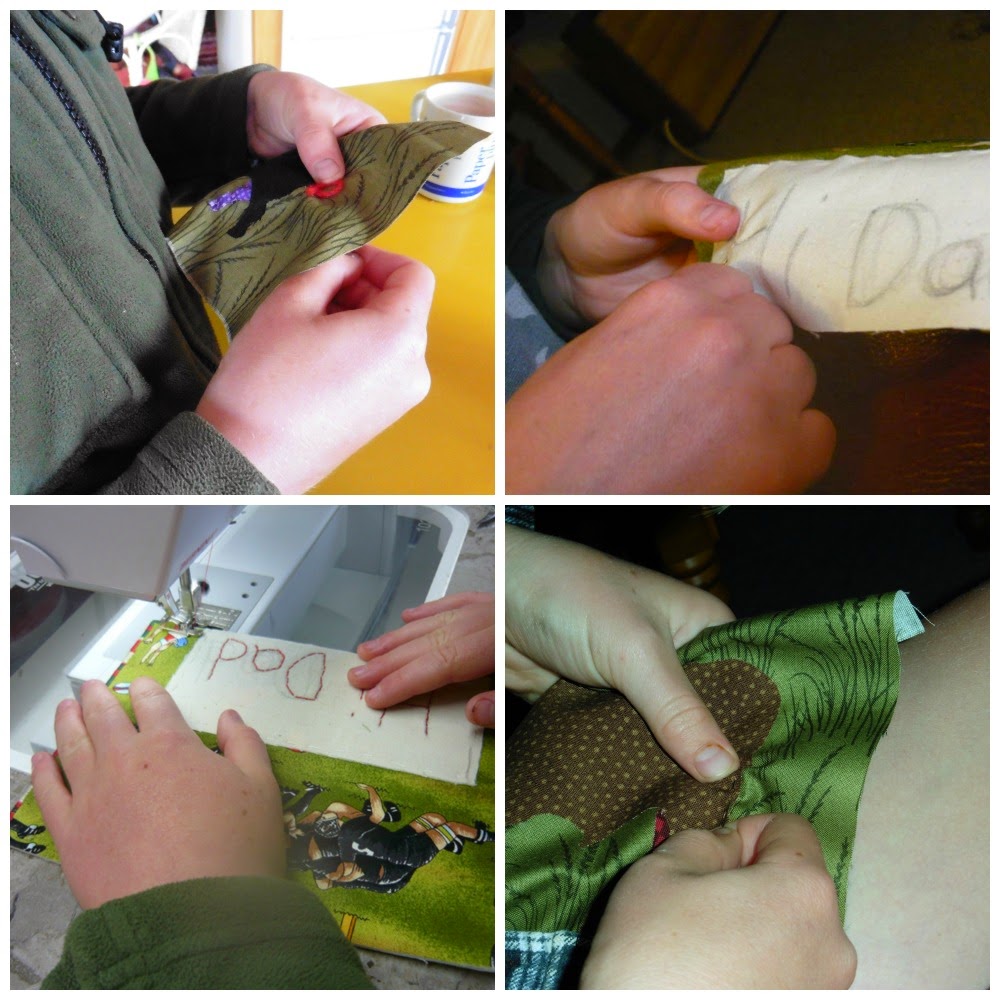 Culminating in several trips to the post office!
While he was sewing I got through a mammoth pile of ironing; shirts, tablecloths and pillowcases all got dealt to in between answering questions and helping with the postcards. Made me feel quite virtuous.
Now he's gone and I'm back to my dithering.

There are a few distractions while I keep stalling. We just have five two cows left to calve, we've been weaning calves left, right and centre, and all is busy and growing on the farm.
When we took some calves out the back (to wean) yesterday we detoured to see the Kowhai Trees in flower. (Apologies to those of you who have been reading my blog for a while; you would have seen similar photos last year. And the year before!) (But I love them so there you go).

I tried taking a video but it didn't come out so well - I had loaded it into this post but it's not particularly clear so I've removed it. The birds quietened down (might have been something to do with DH sighing rather loudly and saying that he was slowly dying of boredom?!) so head over to Leanne of Cottagetail who has a good video of the Tui's 'song' on her blog today.
Ok so for someone who's been dithering I've managed to fill a whole post. I think I need to revert to some list making and get myself moving. For now, it's calf time anyway so I've been saved by the bell, so to speak!
Happy creating, and thanks for reading along.

A fine finish for such a lovely butterfly and love the backing.
Beautiful scenery too :)

delightful cushion, love the name parson bird could not be more appropriate. Good to see your nephew is enjoying his stitching journey. Love seeing the bush photos, such a colourful tree

nothing wrong with a bit of dithering. I felt the same after a big finish.
love your butterfly cushion-it is amazing!
great that you had your apprentice visit and show enthusiasm for sewing again.
the trees are wonderful with their little inhabitants.

Your cushion is gorgeous, I love the pieced butterfly and your finishing and quilting suits it perfectly. We love the tui's too and have a few that visit near our deck :)

Love the butterfly cushion! Juliet has cool designs!Groovie feathers.
Your nephew is lucky to have you and your sewing skills to help him along, looks like he was enjoying himself.
Your Kowhai's are beautiful, we are sad as our large one died, it was like a funeral watching it being cut down :-(

Beautiful pics of your place, and lovely to have a young interested stitcher come to visit. Hope you can settle on a new project soon.

Great Kowhai, we lost one in the frost last year. The butterfly cushion is fabulous, a great finish for the block.
Good to see your sewing skills being past on to the next generation.

Awesome post!! Love your butterfly cushion. Sometimes you need to make something small for a jumpstart!! It came out beautiful. Thanks for the link to listen to the Tui! I want to see one in person. Love those little white neck tufts. Have a great day!!

Love the butterfly cushion! And great photos of the moon too! :0)

I love your cushion Raewyn. What a great way to showcase your butterfly panel. Have fun deciding which UFO will rise to the top of the pile!

So many fun distractions!!! I love your butterfly.

Hi Raewyn ,love your butterfly cushion it's gorgeous,sounds like you are so busy on the farm.xx

Hello Raewyn, what an interesting post. Your pillow is lovely and I like the way you finished the back, sew pretty. I think it is nice that a young man wants to learn to sew, if he becomes a bachelor he will need to know how to replace a button and repair a hem.
I always enjoy photos of your farm . . . it is beautiful. You must be so happy there with all that gorgeous room to roam around:)
Have a lovely week and thanks for sharing.
Connie :)

The pillow turned out very pretty! Nice job on the feathering, too! And what nice detailing on the back. : )
I love seeing things on the blog that are unique to your area. Very pretty trees!

Great Moon shot Raewyn and love the cushion. Lovely to catch up on your posts.x

Your butterfly cushion is beautiful. Loved all your photos and hearing about your days on the farm.

lots happening while you are stalling... I defintely get that feeling after a big project..... a lovely post and your butterfly cushion is stunning...
Hugz

Love your butterfly cushion Raewyn, looks just gorgeous. Gosh is it a whole year since your nephew came?? I remember how he loved doing the postcards last year, seems like yesterday. Dont apologise for pictures of the tuis or the kowhai trees, they are just gorgeous & I always think that taking pics & posting about these things helps us to appreciate them more while they are around.

Hi Raewyn, it's good to see that someone is getting stuff done! I seem to be treading water, not much to even post about lately! I seem to be spending too much time gathering....Spring sure does suck up the crafty time too! Love your butterfly and ironic too cos I have been pulling together the bits to do a butterfly themed glass dome display. I'm a bit into things victorian and taxidermy but in a feminine way and have just received the butterflies which are gorg....it's going to be fun! Too many goals and too little time!

Adore your pillow. You need to come over and finish mine now....grin.

This Butterfly pillow is so exceptional! Just beautiful!

Yes, I know how you feel! I'm a little bit lost too. but you seem to get more done when you are lost! Now I've got my WIFI back i'm going to be catching up on everyone's blogs. Maybe that will inspire me?

The butterfly cushion looks great...you never know Mr 12 may be the next Kaffe Fassett.

Your pillow is gorgeous!
Great landscape photos. I love those flowers.