End of June rolls around

Gosh, the end of another month! I'm pleased to say that I finished the latest block of Foxley Village— 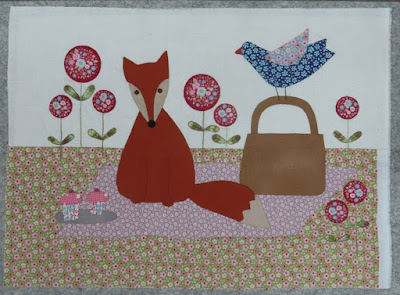 Here's a close up of the leaves; instead of satin stitch, I did something a little different, not sure what stitch it's called but it created a sort of vein on the leaves. 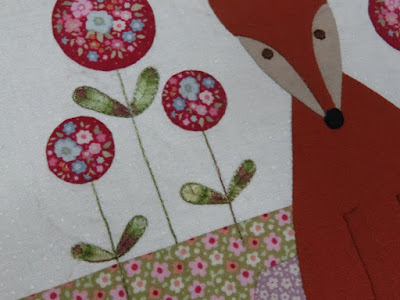 There's just one more applique part to this instalment of the quilt and then I'll be onto the piecing.

Recently I tested another block for Juliet of Tartankiwi. This is another part of the Flashcat Medallion quilt she is currently designing. I really loved making this block and can imagine it in a lots of different fabrics. 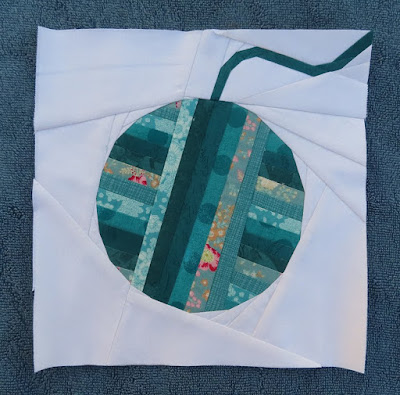 You may remember that this cat is the centre of the quilt. I have since swapped out those cornerstone blocks. 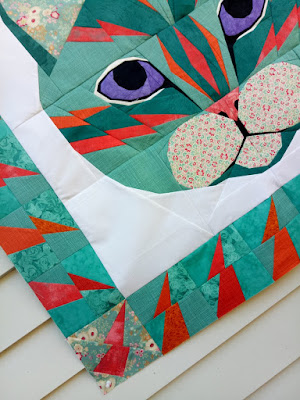 Juliet is running a QAL for this quilt soon - her instagram page is the place to watch if you want to find out more (and to see her finished quilt).
Both of these projects are on my WOOFA list for this year (Working On Or Finishing), hosted by Cheryll of Stitching Cubbyhole. These two projects seem to be the only ones I'm making much progress on this year, everything else on my to-do lists is currently on hold 😕.

Last month the older twins came over and did some sewing. They told me the other day that the snugglies they had made needed mending so came over again to fix them up and adorn them further. They were very confident this time and told me I didn't even need to watch them sew. Hmmmm, after recently reading Lori Kennedy's blogpost about an accident with a needle, I told them I would watch them sewing like a hawk!! 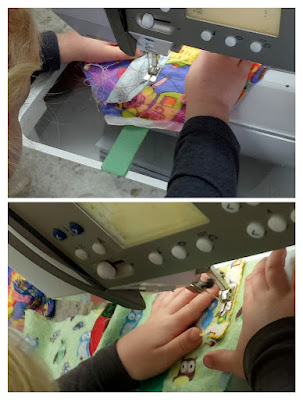 Their snugglies still go to bed with them every night :-)

The only other sewing I've done recently has been to make some beanbag snakes. Wee Odie has a lot of windows in his room, with no pelmets, and too much light is getting in. YD and I are experimenting with 'snakes' to cover the gaps at the top.
The first ones were what we call singles. No good. So we progressed to doubles with a flap. 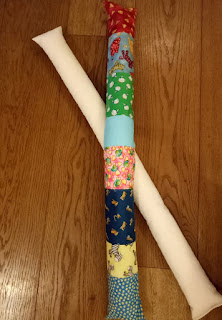 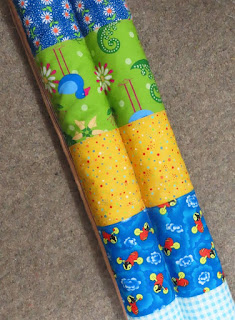 The doubles with a flap are too wide so the next version will be singles with a flap! Sigh. I know that my patience with these snakes will run out soon so I hope the singles with a flap work. In the meantime rolled up towels work just fine. Watch this space!!!!
(Oh, the snake making is a Great Way to use up scraps, so that's a positive.)

'til next time,
safe and happy stitches,

Your two WOOFA projects are looking great. It doesn’t matter if these are the only ones you are working on, as at least you are progressing them. Your other projects will, just have to wait for their turn. Good luck with your snakes.

The Foxley block and the medallion look great. Lovely and interesting.
Great to see the girls wanting to keep stitching.
Your idea of the snakes looks like it should work once you get the right combination. It is tricky when there is too much light in the room. No convincing a little one to go back to bed when that happens. Good luck.

the "snakes" are very interesting! I love the fox and then I see a cat too - both very nice

Good progress with both WOOFA projects . I think you have lots of patience with those snakes , hope the singles with flap work...
Such cute photos of the littles hands busy sewing....

Sorry your snakes have not worked yet - but you'll get it. That cat face is amazing, and I love the yarn ball.

So nice that the little girls are so keen to keep sewing, but as you say, not old enough to do things on their own. Those little fingers and that sharp needle going up and down, certainly needs supervision. Now their snughlies are fixed, wonder what their next project will be?

good idea keeping the projects to a minimum to work on... but I know you are itching to start some new ones!!! haha.... if those snakes dont work I'm sure there will be lots of fun with them.... lovely to see the little ones so keen to sew....
Hugz

Your Foxley Village block is wonderful. Good idea to supervise the girls, it is so easy to sew a finger, especially a little finger. I guess the snakes could be good for draught stoppers, or Odie can play with them when he gets bigger.

A lovely finish on the large Foxley Village block Raewyn!

Still seems like you have a fair few projects on the go, Foxley Village looks great, and good to see the young ones wanting to sew, hope they keep going.

Your Foxley block is brilliant - can't quite work out the stitching on the leaves though - need a closer view. Lovely to have the littlies round to sew again - close supervision is a good idea! xx

Raewyn - it warms my heart to see that a birdie is sharing the picnic with the fox. We need a little more peace in the world, don't you think? Lovely stitching. Enjoy the rest of your week!

Maybe the other snakes will fit on other windows or even where a door at the bottom lets in cold or hot air, season depending. I do like your finished fox block, and the stitch you used on the leaves.

Love everything you sew. All so sweet.

Your Foxley Village AnD Cat blocks are wonderful. Love them...
And good luck with the "snakes"... I'm sure you'll figure it out...xox

Your leaves look great! I love that cat too. Fox,cat, snakes....oh my! The snakes look like a good solution.

Life is a learning process, always embrace the mistakes as they teach us things we would not know otherwise. Who knows when wew will need that information again, or need to share our new knowledge with another.

That Foxley block is very cute!
What a wonderful ball of yarn--looks like there was a lot of piecing to make it turn out "round". Juliet has really captured "the look" a cat can give in her pattern. I expect the cat to make a noise at any minute.
Definitely watch those kiddies sewing, but it is fun that they are so confidant.
You are very clever in figuring how to block the light for nap time. Hope this last one works and truly IS the last attempt before success--and however many more you have to make to cover the bedroom windows.

The Foxley block is so gorgeous! I love your ball of wool too - it's so clever. Lovely that the twins can enjoy some sewing x