We've completed nearly two weeks of (Covid Response) Level Two now and it almost feels that life is back to normal for me. I'm back to my once a week fitness class, once a week playcentre session, once (or twice) a week work day and so on. And you can tell this by the lack of productivity in The Palace!!
I'm working at making sure it doesn't get too busy again and trying to make sure I have complete days at home. Saying NO to the odd thing.....
(To clarify, social distancing is still expected, as is keeping track of where we visit and no gatherings bigger than 10 people. NZ has had just one new case in the last week.)

Anyway, last week I had the older twins come over for a play. After two months of not being allowed in Ganma's house they were very excited ♥ They talked, they played, they ran, they climbed...and they sewed!
They spied my evening sewing bits and bobs and thought it might be nice to do some sewing themselves. I managed to steer them away from the needleturn and after a bit of a discussion they decided they wanted to make bunny snugglies for bedtime. Their mum had done a little sewing during lockdown and they knew they had this sewing thing sussed! Not having the same picture in my head that they had in theirs, I suggested they draw me a picture — 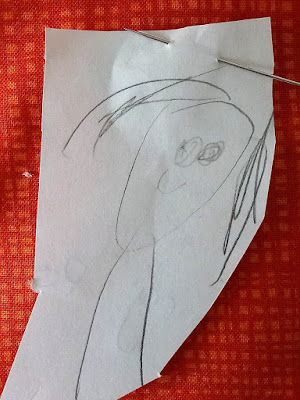 Hmm not much to go on here!

We rummaged in the downstairs (non-quilty) sewing stash.
Here's Kaliah ready to sew —
It soon became obvious that their idea of a bunny snuggly was quite different to my idea of a bunny snuggly. I pulled out a basket where I put braids, trims, and anything too useful to throw that I don't know where to put. I have been collecting and adding to this for a very long time. My girls used to raid it for their sewing when they were younger. 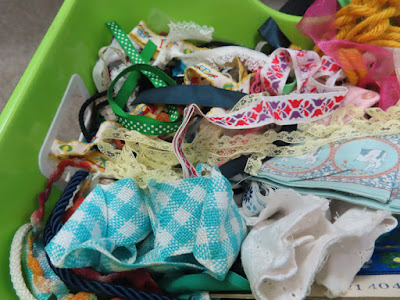 While one prepped her's — 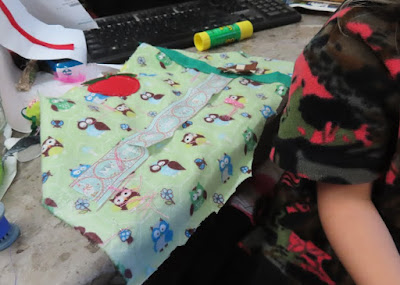 The other sewed her's — 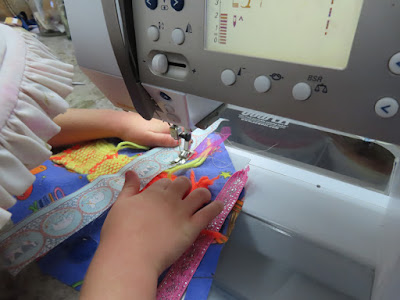 Very proud! They did add a few more bits to these after I took the photo, in a second burst of energy!
Apparently the snugglies go to bed with them now ♥
Time for some exercise after the sewing time — 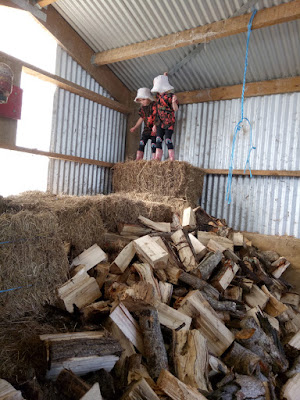 This past week I made a pair of slippers for George — 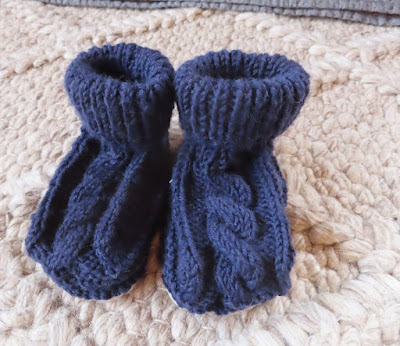 I made several pairs like this last winter and the kiddies got good wear out of them. 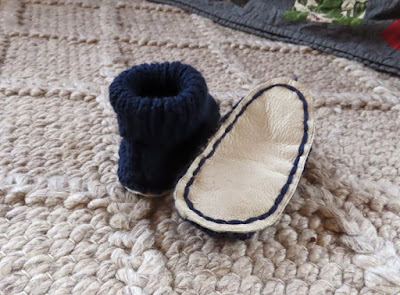 Sadly though, the pattern only comes in one size so I (once again) had to play to change sizes. I went up a needle size and added a few more rows at the base.
I made the soles a little small though so they are a better fit for Lily than George, so here she is ably modelling them. And I've started a second pair for him. 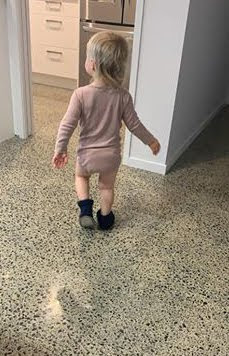 And I have actually done some sewing. I started this zippy pouch in lockdown when I was making the others. I didn't have a suitable zip so had to wait until we were allowed to go to the shops. 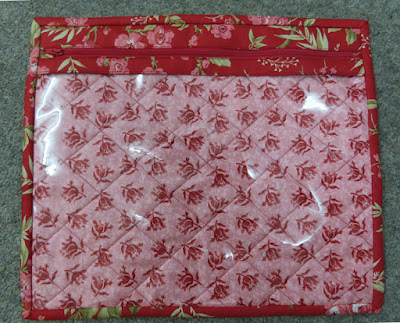 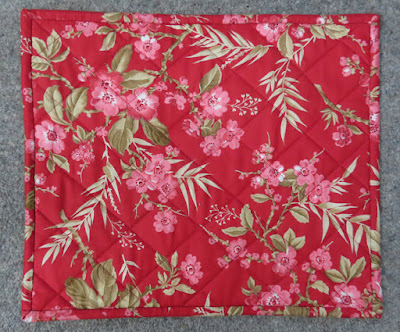 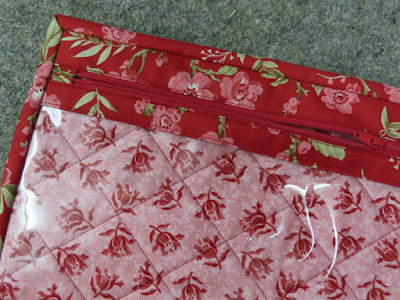 We're very happy as it is raining outside and it's been raining on and off throughout the night. Yaay! Although the farm has greened up over the last few weeks the soil moisture levels still screamed drought. I'm sure this rain will help remedy things.
Must be off,
'til next time,
happy stitches,

Clever little girls, being so creative! And clever you, those slippers are just wonderful!

I love the story with the girls sewing and wonderful what they made... its so fun having childrens creativity and them being so pleased with the result... dont we grow up to be so critical of ourselves? I was just thinkign what will change as we all get back to 'normal' and if we will take on new 'normal' things.. I think your saying no is a good one (only to some things of course!)
Cutest little slippers.... at least with different sizes of kidlets around someone will fit them! maybe even bigger ones will happen????
Hugz

So happy to hear that you are now able to be with your family and the kiddo's--
and your sewing adventure sounds like fun!!
Love the red pouch--
keep enjoying the moment--
luv, di

The big twins are so cute with their sewing and they look so happy with what they have made. I can see them having many happy sewing sessions with you in the future. The zippy pouch is lovely Raewyn and the knitted slippers so cute. Good to hear you have had rain, hopefully it sends the drought on its way.

it looks like so much fun having the girls over to play like that and so nice seeing little girls out in the barn with the hay bales having fun. All the sewing and stuff so nice to see - glad you are in phase 2 and being able to do more things - we are still in one here and probably shouldn't be yet as too many cases - the governor of our state had his daily update and warning people no phase two if they do not cooperate and help get the number of cases down - too many people not caring and running around spreading germs

I love your apprentice quilters! Get them young I say lol! Glad stage 2 is going well for you. I am still pretty much staying home....except emergency items...food, sewing and art supplies! The knitted boots are so cute and I just love those zippy sew through pouches....can't have enough! They are so handy. Take care xx

Good you are slowly getting back to normal . It is here too but still no exercise group going.
You all had a fantastic fun day and it's great to see the girls getting into the sewing... oh I did see your OMG patch on Saydee's snuggle....
Gee the girls have grown so much....
Really cute slippers and it looks like Lily likes them...
Pleased your getting some nice rain.

Such a difference between your going to level 2 to ours. Sigh. The twins sewing is awesome. How very fun. Great slippers.

So sweet! Between the hats, the bunny snugglies and the slipper modelling... they are sooooooo adorable! :-)
Great project bags too!

How good to be sort of back to normal. The girls look so pleased with their finished projects. A great memory for you all. I’m pleased you are finally getting some rain.

Well, that is surely encouraging news about your Phase 2 re-opening. Here we are still just getting into Phase one-partial opening...(if everyone would wear masks and social distance I think we would go out, but no such luck--we are not ready to take that chance--my rant for the day;000)
I love the little sewing girls' finishes--so cute;)))
Adorable little slippers, too
~ ~~ waving from afar on this foggy morning Julierose

What great news. So happy to hear NZ has only had 1 covid report this past week. With luck covid will die off and everyone in NZ will be safe, even better this good news goes world wide. And I'm delighted to know your beautiful gkids were able to come visit and share their smiles with you.

Gorgeous little girls and so proud of their work! Great slippers. xx

Raewyn - I need to take a page out of your book and control what happens to my time now that things are re-opening. Just before this all started I wrote a blog about TIME, and seemed to get my wish for more of it … The twins are adorable, and how much fun to do a stitching project with them! Enjoy the rest of your week!

How lovely to have the twins over. It looks like wanted to do everything after missing out for so long. What fun to have them wanting to sew. Love the results.
Those little knitted slippers look so warm. Well done sorting out the sizes.

Oh I love those slippers! So cute! The pic of them playing on the hay bales (unless they're straw--can't tell in pic) had me remembering playing in our barn when we were little. Hours and hours and HOURS in there, unless we'd just baled and it was so full no fun was to be had. Then we just found some kitties or something else to play with. So glad you got to spend such fun time with them! We're getting very back to normal here and it feels great! Businesses really need it, as I think we all do.

The little slippers are SO adorable! As is the twins sewing up their snuggle bunnies. Yup, I found that when a couple of years ago Brady wanted us to make a mask (pre covid lol) but we muddled on through. Lovely farm pics and yay for rain to make things greener.

I can see why the girls are so happy to come for a visit. They will someday be very accomplished seamstresses! Those are darling little slippers.

What do you use for the soles on those slippers? Making slippers is something i would like to do too.

The girls are growing so fast....

The little people clearly had lots of fun with Gamma.
Good to see you in Chookys zoom meeting.