An extended Friday Night Sew In

I've had one of those lovely FNSIs that has lasted through several hemispheres!
Last time I shared my afghan it was needing blocking before I worked on the border.
I did that last week. 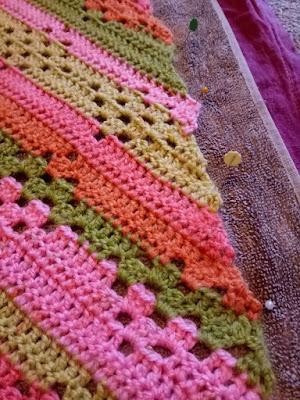 On and off over this last week I've been working on the border. And I continued on with it for Friday Night Sew In last night. 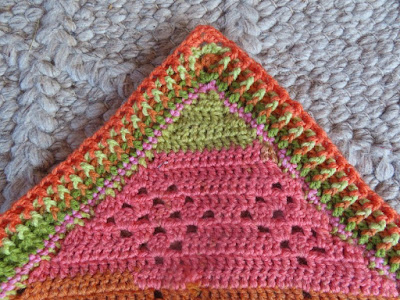 Today I carried on with it a little more. Joanne Threadhead and I skyped while we both took part in FNSI. She was still on Friday and I was on Saturday and it was lovely to have the virtual company in the virtual sew-in (hehe if that makes sense!)

The photo below shows the final round - little picots along the top edge. 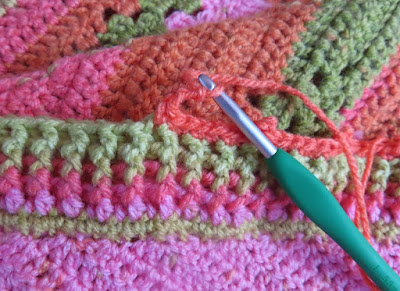 What the photo doesn't show is how little yarn I had left!What you see below is all that I had for over half of that last round! 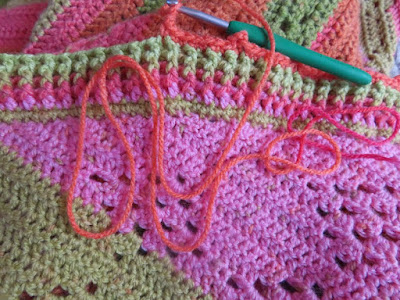 The border makes the whole piece - it just finishes it off so nicely. I did consider not doing the last round of picots. As it was, the orange I am using in the above photo is from a different coloured Caron Cake and isn't quite the same as the one in the original cakes. Same tones just slightly brighter.

I hunted a bit and came up with two options — 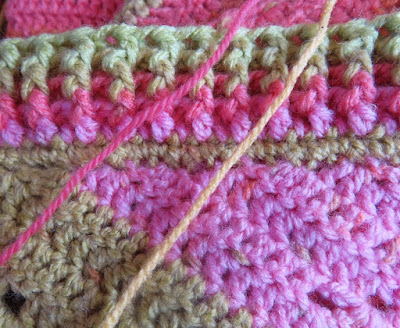 The salmon on the left is very similar colour wise. It's a leftover from a baby cardie but is 100% wool, whereas what I've been using has only been 20% wool. (It will look fine but that will quite possibly change when it gets washed, and I intend this to be a child's afghan that will get used and used!) The yellow on the right is a Caron Cake yarn, so is the right mix, but yellow hasn't been used at all in my afghan! A bit of a dilemma.
As it's a child's one, I've decided to go with the yellow. It may look a little odd to us crafters but I know it will be absolutely ok for the child involved. Consider it a special design element!

After Joanne and I signed off and I did a few jobs, I spent the rest of my extended FNSI sewing some bassinet sheets. We need some summer ones, not the cosy winter ones I made a few years ago!
I'd already done the planning, and pre-washing. It didn't take too long to cut them to size and hem around the outside edges once I sat down to do it! [Isn't that always the way :-)]
A special thank you to Wendy of Sugarlane designs for hosting us. The linky is on her blog *here* if you want to see what others got up to.
'til next time,
happy stitches,

The afghan is lovely. Bassinet sheets they look cute, and isn't it always the way. The job we dread the most is the easiest? Maybe it is just that it is kind of like drudge work.

I like that afghan - why not add a bit of yellow too - so many colors it should work well I bet.

As you say the little one will love the pretty afghan even with a yellow edge.
Nice to sew along with your friend on skype and also your virtual friends at once..
Lovely fabrics for the new bassinet sheets..

What a great job on the afghan. I'm so glad that I went ahead and purchased the pattern. I've crocheted with the Cakes in the past and do like the yarn a lot. The dallema for me will come when I have to decide on the Cake colors! There are so many pretty ones.

I've never been able to figure out crochet but it looks beautiful! (If I ever veer from quilting, I love to knit.)

Your afghan is looking great. I also like the idea of adding a little yellow. The fabric for the bassinet sheets is so fun. I'm amazed at your wonderful talents and all you accomplish!

Raewyn, love your crochet blanket and the cot sheets are very cute.

you did get lots done.... lovely having social and sewing at the same time... lovely fun sheets too.... enjoy sunday…

How lovely to have company while you create...even if it was virtually!! Always good!

Wonderful to have someone to crochet along with, your Afghan looks amazing Raewyn and the basinett sheets are super cute.

Lovely Afghan Raewyn. I'm sure the little girl you are making it for will love it. I love to crochet as well. I don't know how you find time to do all you do! You must be very organised! :-)

I do love your afghan and how lovely that you could FNSI with a friend through skype!

Those cot sheets are super sweet. Wouldn't it be awesome if it wasn't seen as strange for adults to have cute critter print sheets too?

Enjoy the rest of your weekend :)

You have done a beautiful job on the Afghan Raewyn! And the bassinet sheets are so cute.....funnynhiw we put off these easy jobs lol!

What a fu. Time you had...love the Afghan....I’m sure it will be loved and hugged.

A very productive FNSI, the Afghan is looking good and I'm sure the yellow will be a lovely design feature.

Love the Afghan. The yellow will give it a nice pop of color. The bassinet sheets are sweet. Skype is a great way to keep up with far away friends.

Your afghan is looking great.
I was unable to join in this week as we had too many commitments. I didn't even manage the world wide time extension.

Fantastic fabrics for the bassinet sheets!

great finish with your crochet blanket. I think the edging has finished it off perfectly, too. Love the colour combinations.
Gorgeous fabrics for the sheets - bassinet? Another bub on the way?

I thought the afghan was lovely with no border, but that takes it to another level. Beautiful work--and I think the yellow will look good. :)