(and home again)
(Warning photo heavy and no quilty crafty snippets in this post!)

In my last post I mentioned that we were having a few days away while Mum was staying. Because she had never really explored the Far North, we headed up there. 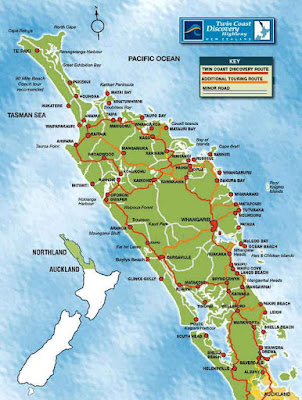 From where we live, it's about 4 hours to Cape Reinga, the tip of the country. We meandered our way up north.
Obligatory tourist stop as you go through the mid north is the toilets at Kawakawa (!). Built by Hundertwasser in 1999 using recycled materials they are a must stop and one of the town's main attractions. 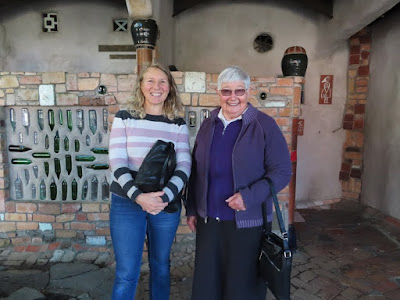 We stopped for lunch at the 'world famous' fish shop at Mangonui, eating out over the water :-) 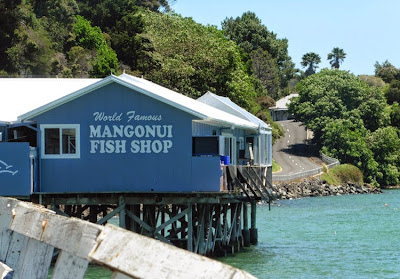 We travelled further north and followed the coastline, along Doubtless Bay until we got to Awanui. Here we stopped at Kauri Kingdom, where recovered ancient swamp Kauri is carved/fashioned into tables, and other beautiful pieces. The trees have been preserved in swamps and are carbon dated to be about 45 000 years old!
Visiting here was doubly interesting to us this time as ED and her hubby have recently found some ancient swamp Kauri on their block of land. What they thought was the odd 'log' partially buried on the ground turned out to be big swamp Kauri logs mostly buried in the ground! 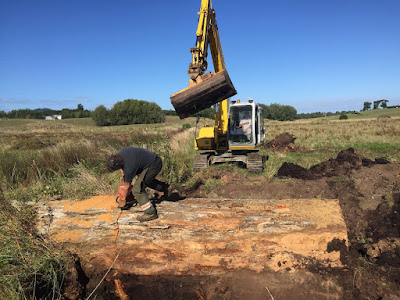 We headed up towards the northern tip of the country - up the Peninsular as I call it; until we reached Houhora which is where we stayed back in March.
After a beautiful sunrise the next morning — 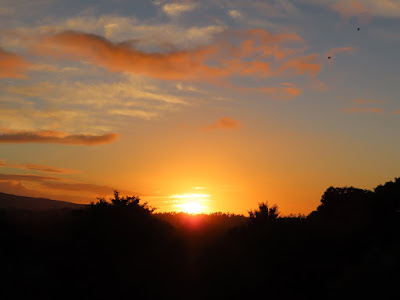 We headed north to reach the top of the country. The first time I went up to Cape Reinga it was mostly metal roads and not a very pleasant drive. Now it's all sealed roads! At times you could almost see the coast on both sides at the same time - the East Coast and the West Coast - it's not a very wide part of New Zealand!
We left Mum on a seat part way down, while the MOML and I walked down to the lighthouse. Took the necessary tourist photos — 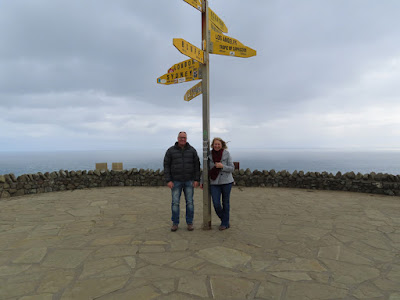 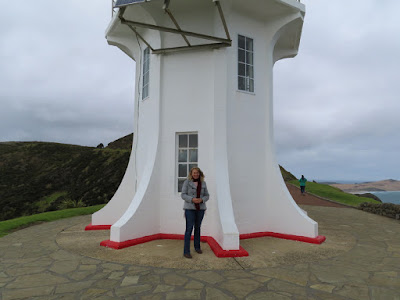 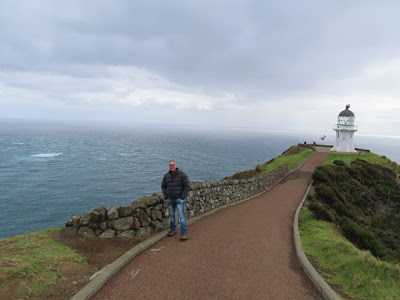 After admiring the views, we set off back to Houhora for another night. We took a different route this time, turning off at the Te Paki sand dunes, driving a short way along the Te Paki River and onto 90 Mile Beach.
And along the beach — 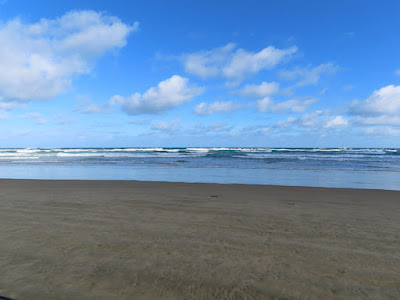 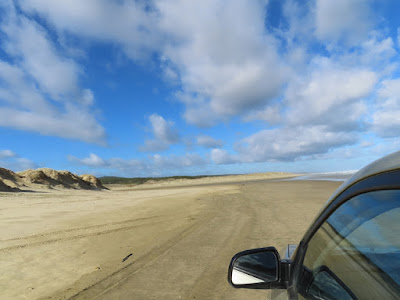 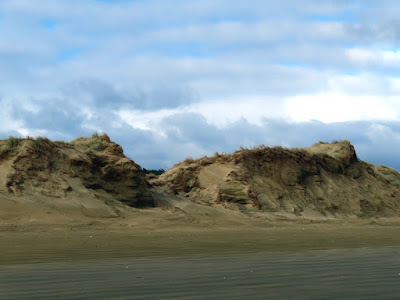 90 Mile Beach is not quite 90 miles long. It's actually about 55 miles, misnamed by the settlers who miscalculated how far their horses could travel per day on the sand. We didn't drive down as far as the Bluff. We'd worked out where we needed to turn off to get to our accommodation.
On our way home, the next day, we decided to show Mum the Hokianga which is described as a large fjord-like inlet on the west coast. The harbour extends inland for 30 kms. We drove to Kohukohu and took the car ferry across to Rawene, on the other side of the harbour.
At Opononi we said hello to Opo the Dolphin - who was a friendly dolphin who captured the hearts of New Zealand back in 1955.
We drove home down the west coast, through the Waipoua forest, well known for its large Kauri forest, including our largest known living Kauri tree, Tane Mahuta. There were a lot of people at the car park near Tane Mahuta and the weather was starting to turn so we didn't stop and walk to see it. We were saddened to see the amount of Kauri dieback disease in the forest as we drove down through the forest. Huge old trees reduced to bare branches.
A bit more of a drive and then we were home! We had a great couple of days away and it was interesting to show Mum some of the sights and scenery of this part of the country that we love so much. Lots of sea, sand, big spaces and not too many people :-)

I took Mum back down home at the start of the week (a day there and a day back) and I think she was happy to be back in her own bed!
Finally I've had a chance to sort and resize my photos and yaay finally a blog post is written.
Tomorrow night is Friday Night Sew In and I've just popped over to Wendy at Sugarlane Designs to sign up for it. I'm looking forward to a bit of stitching (perhaps).
Thanks for putting up with all the photos and the geography lesson on the Far North :-)
'til next time,
Happy stitches,

thanks for sharing - it all looks so lovely I really do wish I would see it all one day but doubtful to save the money for a trip like that so I love seeing photos of all these beautiful spots. That huge table is really something isn't it - lovely! I love lighthouses.

Thank you! What a marvelous armchair tour of your beautiful part of the world and how cool that ED found some of that fabulous wood on their land.

Thanks for sharing. Great photos of your trip...

I really enjoyed your vacation and all the lovely pictures. It was also fun learning new things. Thanks for taking me. :-)

It looks like a great trip with beautiful and varied scenery. I think you should have bought that table!!!

Well this student--loved the lesson and the photos--
your Mom is so lucky to have you for a daughter (and a great sil there too!!)
ok now back to stitching-------
luv, di

I enjoyed the tour. New Zealand is on my bucket list. I just recently read about my parents' trip there decades ago, but they didn't get to this "neck of the woods".

A well documented trip. Its a real shame about the Kauri die back. Your Mum will have fond memories of her time with you both on this trip. It's a while since I went that far North!

Thanks for the photo tour, I enjoyed it very much! Just curious, what is a metal road? Thanks.

Fabulous trip... so much to see in a relatively small part of the island.... Great find for your DD - I hope they make a pretty penny from it...
HUgz

Don't apologise for this post. It was fascinating. We've never been to that part of the world, so it was really interesting. Hopefully we will get there one day. The weather did look to be a bit blustery and cold by the lighthouse. The swamp kauri is really interesting and beautiful. So wonderful that it can be salvaged and made good use of. I'm sure your Mum would have loved her guided tour.

There and back again.......Raewyn’s tale....
Lovely travel pics. We have been to the South Island and it was magnificent, the north looks just as stunning. One day I hope to visit there too!

Thoroughly enjoyed your trip up north, we hope to get there one day!! So good to see the different places you visited, sad about the kauri disease, they are amazing trees.

Wonderful trip you all had! I was interested to read that the road is now sealed up to top - good move.
Looks like you were lucky and had good weather Raewyn and a nice break!

It is funny how as a resident you often dont do the tourist things. My ex had family who fished up 90 mile every weekend, so we often drove up the beach or along Te Paki to meet up with them, and very much took it for granted. I always found driving on the beach stressful!

A lovely trip..we need to go further North to see my cousin Billy next time we visit...thank you for the photos x

You and I were just talking about how expensive it is to fly to NZ, but I can see that it would be money well spent! Beautiful pics. Glad you were able to make that adventure happen with your mom!

Looks like a lovely trip away! That swamp Kauri is amazing!! Now your ED and hubby can make a table out of it :) :) xx

I quite enjoyed our tour of the northernmost parts of New Zealand. Thank you so much for taking me along. I was smiling at the dunes, because when I was a child, back in those 50s you mentioned with the dolphin, one of my great delights was sliding on cardboard boxes down the sand dunes of eastern New Mexico and west Texas. Sand everywhere, even in the hot dogs for our picnic, but I never minded in those days! What a wonderful thing to do with your mother.