A new month, a new goal, and more sewing

I had a nice little play in my sewing room aka The Palace over the weekend..... I decided to carry on with some red Scrappy Sprouts..... it's a new month so officially we're on to a new colour in the rainbow scrap challenge (run by Angela over at soscrappy) but I was a bit grumpy at myself for managing only 2 red blocks. Almost half of each block was donated by Sue over at Mother Patchwork so that meant I'd done even less sewing and used even less scrap fabric than it looked!

So I now have a total of six red sprout blocks and I'm happy with that... 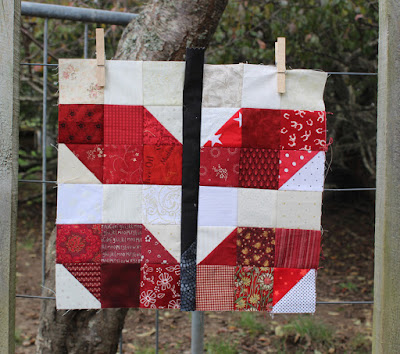 I'm taking a bit of a risk joining them all up before deciding how I will lay them out but it suits me to do it this way. 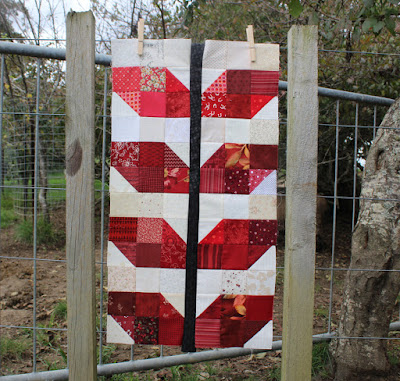 Because they're sprout blocks I thought I should photograph them in the orchard (I move outside to photograph in the natural light when I can anyway) and I guess I shouldn't have been surprised when Paddington our lovely old ewe wandered over for a sniff and a lick! It's getting to be a habit around here, our pets photobombing my photos! 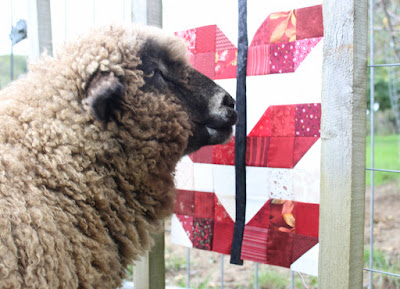 (My original post about these sprout is *here* if you want to find out more).
While sewing the sprouts I spent a bit of time thinking about my next One Monthly Goal...Patty D has opened up the linky for April's OMG. As I've said before I like to use the OMG as a chance to pull out a long forgotten project and get some work done on that.
Not really forgotten but long time unfinished is this quilt made for me by my friends one year when a group of us "Round Robined" We had a fun year,  each taking turns to work on each other's projects and I was totally in awe and in love with my quilt when it came home to me.
The blocks had been joined as it had been worked on and it looked awesome but I think I was a little overawed and put the quilting and finishing in the too-hard basket! Of course that's not true and to be honest it doesn't need a huge amount of quilting as it is so detailed. 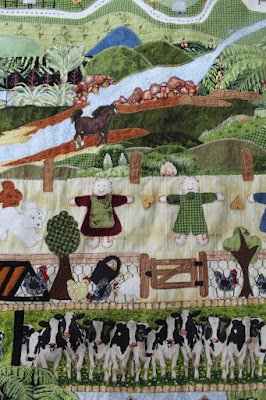 Side tracking me from finishing things like this are fun little projects I start playing with. I've gone from 'just trying out' one Scrappy 9 Churn dash block to designing a quilt using them in my head.
So now I have four of these blocks. I love them :-)
New blocks Number One and Number Two. You can see I experimented with using some browns for the Churndash.... I had been stuck in pinky/red mode! 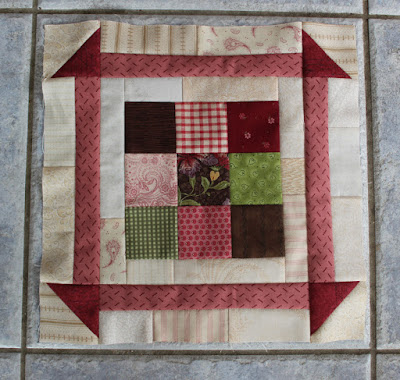 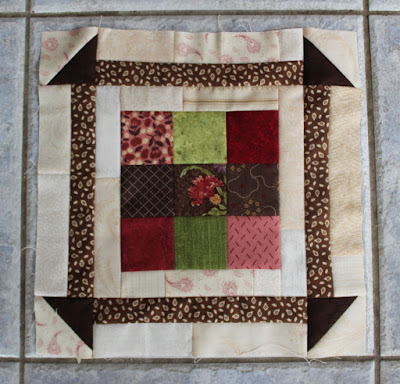 And here are all four together - 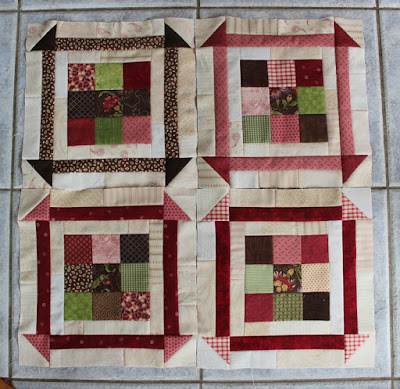 Cyclone Debby, who caused a lot of damage in parts of Australia last week, has arrived in New Zealand. Last night we got torrential rain but luckily no wind. We woke up to massive flooding on our 'bottom flats' - the surface water is receeding now but it's very soggy. We're wondering how much more rain is around. In the meantime, once animals are fed, it's great weather for sewing :-)
'till next time,
happy stitches,

Your red sprouts are wonderful, but I LOVE those churn dash blocks.

The sprouts are multiplying! Oh that round robin........you have to finish it, it was fun! love the scrappy churndashes............I hope you didn't have to kayak to the mailbox?

I was thinking of you yesterday with all the heavy rain, hopefully things will dry out for you in the next few days.
What a lovely photo of your red Sprouts being admired!

your sprouts look good and the quilt wow that is a real beauty what a lovely wallhanging you will have when you have completed it. Churn dash blocks looking good too. Trust land is drying out now after all the rain of course you are heading for colder weather now just as we are starting to enjoy some sunshine here. What fun to have a pet sheep to appreciate your stitchng

Lovely to see more red sprouts, and delighted that Paddington approved!
Love what you are doing with the churn dash blocks. That is very effective.
And good luck finishing your round robin quilt.

Love the red sprouts and I am very happy Paddington has given approval!! Your Round Robin is amazing, looking forward to seeing it finished. Your churn dash blocks are lovely too...can't wait to see what develops with that either!! No pressure though!! Hope the ground is drying out and there hasn't been more rain today.

Hi Raewyn: I love those sprouts....I think they would be a good leader ender project. Are they 2 1/2 inch blocks? They look like they would make such a sunny fun quilt. I also love the sheep.

I think you are doing an great job on these blocks. Such a cute round robin quilt. You need to get that one finished and enjoy it.

Love the red sprouts and I am surethat Paddington thought they tasted good and no calories for his spring diet!!!
and I love your churn dash block--and my quilt friend back in NY would love that one--
she loves 9 patches and she loves the churn dash block--a win win for her--is this your own pattern????
stay dryer--
enjoy the moments, di

Love youyr 'churn dash' blocks! Sunny here today finally after all that rain. Hope things are drying out at yours.

Such a cute quilt, and you'll be so happy to have it quilted, you can do it.

Love your sprouts and churn dash blocks. I love your photobomber lol! Your round robin in just lovely too. Cyclone Debbie has been a nasty bit of weather. Hope she is on her way now!

Haha! Funny Paddington! Your animals do like your quilting! Love the round robin quilt, it is gorgeous xx

Love the photo of the sheep looking at the block! Thanks for linking up with Elm Street Quilts and good luck on your project.

Those sprouts are divine. I LOVE LOVE LOVE the photobombing. Paddington is so sweet smelling the sprouts! Glad you had no damaging wind with Debbie. My sister experienced travel delays and had to spend an unplanned night in CC instead of getting home to Rotorua.

Your Sprouts look great and I love the photo of Paddington photo bombing...
What a lovely Row by Row, you need to get it finished!
The Churn dash blocks are looking good too.

I do love the sprouts .... and clearly Paddington does too.... Your churn dashes are great and your round robin quilt is so much fun... what a lovely quilt from friends....
amazing how far Debbie has extended her visit....
Hugz

Your sprouts are going to be so much fun all together! I do love your photobombing critters! Good luck finishing that lovely round robin. It's lovely and I'm sure you'll do a superb job with it. You churn dashes are great, and they all seem to play well together, red/pinks and brown too!

Love your Sprouts - it's such a cheery little pattern. Obviously Paddington approves too!