Foundation piecing and the chickens

I was happy to have some sewing time over the last week, which was just as well, as my Tuesday Medallion Quilt started talking to me :-)
It told me it dearly wanted a bold border with a bit of movement in it, and it really wanted something to frame what I had already done. I had initially wondered about an applique border but after my round of hexagons the quilt said "No" and I agreed, that idea wasn't going to be quite right. A bit of research through my extensive magazine collection (as well as some valuable pinterest time) got me interested in a spikey scrappy border - the quilt said "Yes" so I set about converting the pattern I found (it's one by Chris Jurd in Australian Quilters Companion #32) to suit my sized quilt.
It's a foundation pieced border and I'm hoping to use all of my scraps in it (although I did have to buy some more cream, go figure!!).... one side done, just 3 to go.
I'm liking it and am at the stage of being hopeful that it will suit....not 100% sure but happy enough that I am NOT going to try anything else!! 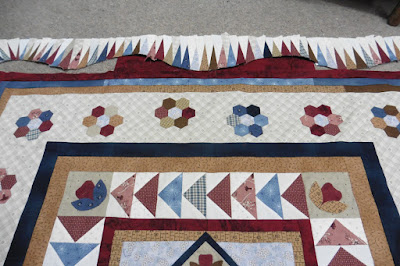 I've often thought it would be nice to share about a handy little gadget I have which I find invaluable for doing foundation piecing.... even if you only do a little bit I reckon it is well worth having.
It's called the Add-A-Quarter ruler..it has a lip on it and I think photos will be better than words to describe how it works.
I cant direct you to where to get one of these rulers, I found it in a quilt shop in Nashville a few years ago  - but it's not a waste of money if you see one and wonder whether to get it or not!

Foundation piecing wasn't the only thing on the menu over the last week, all of a sudden the teenagers (the link is *here* if you have no idea what I'm talking about) grew up and started laying!! Over the last few days I've been gathering eggs by the dozen - not quite, but look at this!

And just for a laugh and because I cant help myself.......... have you ever seen a rooster with a milk moustache?
I have and here he is... sometimes my (stored) calf milk curdles and I like to give the leftovers to the chooks... good calcium for strong shelled eggs. This day it was particularly thick and Mr Rooster really got stuck into it!!
So you can see all is well and dandy on the farm just at the moment..... and it's now time to go and feed some more animals,

See you next time
Happy creating

I love your border! I think it's going to look great on your quilt. I can't believe how many eggs you got!! You'll have to do lots of baking and cooking to use them up!!

Your border is perfect! Always enjoy seeing your barnyard animals. Those a some mighty fine eggs. Nothing better than fresh eggs!

I too love the border Raewyn and the Add a Quarter ruler is a brilliant idea, I have one in my drawer of accessories! What a lot of eggs!! Nothing like fresh laid eggs.

Fantastic job on the border can't wit to see it finished. Loved hearing about your chickens. This time of year I miss being on the farm. Have a great week

You make that foundation paper piecing look so easy ~ would probably help if I did it more than once though ~ lol ~ your border's looking good!

That border is really fantastic. I love the movement.

The eggs are so pretty. It's always fun when they first start to lay.

Your scrappy border is gorgeous...I think it will be the perfect choice for your quilt!

Your border is going to be amazing!! I'll never be that ambitious. Mmmm....fresh eggs. There's an egg shortage in the US, so we've been buying fresh eggs from local farmers. I don't think we'll ever go back to grocery store eggs.

Hi Raewyn,boy i love this quilt and thankyou for the thumbs up with the ruler,lol funny rooster,lots of lovely fresh eggs there,hope you have a lovely day there my friend xx

Your border is looking wonderful... a very clever addition! And your mr rooster pic did make me laugh!

you could not have picked a better border for your lovely medallion quilt. Re the ruler, I bought one with a 3/82 lip on it the other day It is for cutting fabrics for hexies etc I find the 1/4" too fiddly and obviously others have had trouble as the ruler shows

Good to see the chucks are laying well, not seen a green egg before or a rooster with a moustache!

your border looks amazing Raewyn, looks so complicated for me.
Well done to the feathered girls laying lots of googies.
Mr rooster looks very content with his milk moustache. lol

Quilt and border looks great and those eggs look good as well :)

What an interesting border - looking forward to seeing it on the quilt. xx

Beautiful border...a stunner. You are a clever girl! Very clever chookies. Mr Rooster certainly has attitude despite the milk moustache lol! I began working on your little Aussie birdie today..xx

That quilt is lovely, like the colours you have used. Wow those chickens certainly have grown. I finally discovered where my girls have been laying their eggs, not in their nesting boxes that's for sure.

The border looks amazing Raewyn, very creative of you!
Enjoy all those eggs...

Spectacular border Raewyn! Your quilt has been quite talkative, LOL.
I love my add-a-quarter ruler too and what a difference it makes for paper piecing! they have an add-an-eighth ruler for very tiny PP too.
You probably could use all the egg recipes you can find. I never knew that chickens would eat curdled milk. Loved that mild mustache, hee hee.

Gosh those borders look stunning Raewyn .... & complicated to a novice like me :-)
Pleased to see the teenagers are giving you some rewards, you cant beat fresh farm eggs.

The borders are beautiful, they look like a lot of work! This quilt is going to be gorgeous. Lots of wonderful eggs and the milk mustache is fun!

I just love your wavy scrappy border ... I'm looking forward to seeing how you will join it all together... thanks for showing us that gadget.. will keep an eye open for it... quilt show in October but meantime i will borrow my friends on sewing days!!
Hugz

Your quilt boarder is wonderful . . . you are such a talented quilter. You give me hope and inspiration:) I have a friend who started getting chickens last year . . . she was buying all different kinds so that her eggs would be a rainbow of colors. Every time she bought a new pair of chickens, she would get so excited . . .like Christmas morning :)

I love your FPP border. I think it will look great when attached to the quilt. I never knew that chickens like milk! I tell you, you learn something everyday.

Love the border Raewyn and that gadget is a great idea!
Good to see the teenagers have grown up!! Love the milky moustache!!

I love the wavy border and think it is the perfect choice for your quilt!