Well, kiwi flavour in my sewing, that is.

Recently I took part in a Postcard Swap, arranged by Sheila, of sheilasquiltworld. It was pretty scary as I hadn't made one before but after a fair bit of procrastination I managed to get one together and post it to my partner in Canada. The friendly man at the local postshop raised his eyebrows and said it was 'pretty' and popped it in the mailbag. 'Whew' I thought, first hurdle over! It safely arrived at Annette's place so that was a relief. I think my biggest fear was that it would all come unravelled in the post; apparently it hasn't so that is double 'Whew'.
Anyway, Sheila had set the theme as flowers so I decided to put the NZ Christmas Tree on mine, the Pohutakawa. 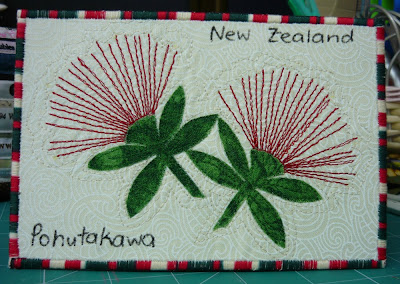 While my card was winging it's way to Canada, Annette's postcard arrived safely at my house. It is gorgeous!! Annette chose to decorate her's with her Provincial flower, The Prairie Lily, which is also very pretty. 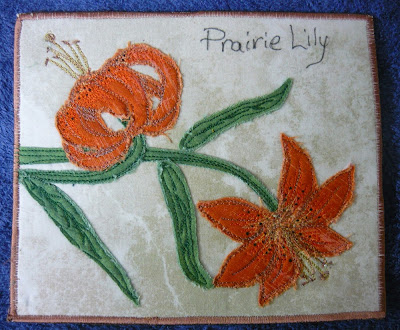 I have made another one which will go in the post next time I go to town; Sheila sent me one a little while ago and I have taken a while to build up the courage to make her one - finally mission accomplished so Sheila, your patient wait will soon be over. I will show you Sheila's one to me once mine gets to her.
They are actually fun to make but I have been so worried about 'getting them right' - a bit of a sook I know but now with 2 under my belt I think I'll be right (mate) :-) (sorry, more kiwi flavour).

The NZ fantail is another kiwi flavoured subject to share with you today. They are one of my favourite birds and when I was doing my 365-day photo blog I was determined to get a really good photo of the cheeky little bird. The NZ Fantail, Pīwakawaka , is a small pretty little bird that flits around and keeps us company as we work outside. They dive and dart so much that, with my camera, I found them very hard to photograph and I never really got a photo I was happy with. Here are a couple of the better ones I managed.... 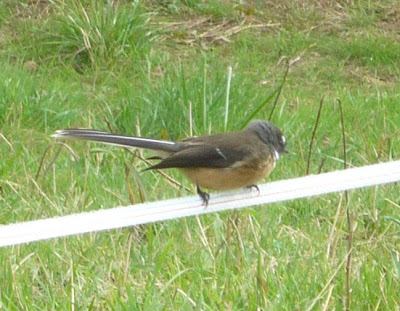 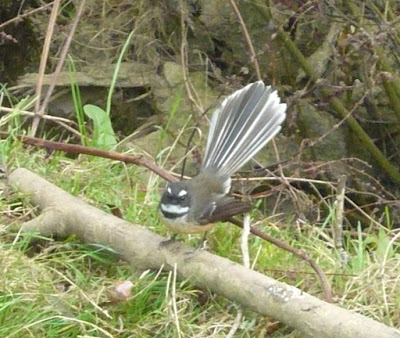 When Juliet, of Tartankiwi blog asked for pattern testers for her Fantail foundation pieced block, I was keen to put my hand up - maybe I could finally get a decent photo of one!!
Here is the 'tested' block. Isn't he a cutie? Check out her blogpost here for more versions. 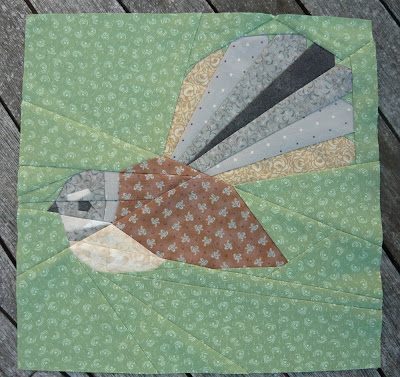 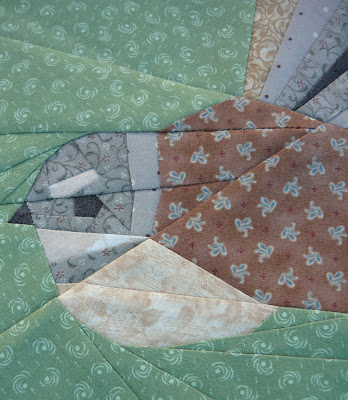 I really enjoyed making this block. Watching the different elements come together was fun.
The clever Juliet is currently doing a NZ native bird series. She has links to her patterns on Craftsy via her blog if you are interested in having a peak and a play.
I've a few more bits to share but I will leave them for another time.
Thank you for visiting :-), happy stitching and have a lovely day,

Wow.......beautiful postcard and your lovely bird block is perfection! You managed to capture the NZ fantail beautifully.....If they're anything like the wrens that play in my garden.....they move very quickly!

I did Sheila's postcard swap, too, and it was also my first time!! Your sentiments mirrored my own thoughts! Yours came out absolutely beautiful. I just love that little bird. I am a birder and haven't seen anything like it before. I'd love to have them keeping me company around the property! That tail is really something. Can't wait to visit Juliet's blog and check out all her birds!!

Great postcards, I didn't think they'd go in the mail like that. Love your Fantail, I have a beautiful necklace from NZ with a fantail on it.

Both postcards are beautiful, I always love the pohutakawa! And I know what you mean about trying to photograph fantails, they don't stay still for long! Your pieced fantail is gorgeous, I will have to check out the pattern :)

Your postcard is beautiful! Thanks for doing such a great job with my fantail pattern!

A great job on your postcard and love the little bird block. Well done!!

oh my Raewyn that bird is so gorgeous and love the postcards also ,what a lovely swap.xx

Aren't postcards fun? You did a great job with yours! I just love making them. Love that little birdy, too.

Both the postcards are really gorgeous. The one I sent to Canada still has arrived after four weeks. I am worried...
WOW your foundation pieced bird block is amazing...

Smile the fantails are cheeky wee fellas aye. Very hard to get a good shot and you did well!
Off to check out the bird quilt blog thanks for heads up.
Love Leanne

Raewyn , both postcards are just beautiful , how lovely you both chose flowers that represent where you love , great idea . That is for taking part in the swap. The little bird is adorable , I love watching the birds and your little PP version is great too.

Hi Raewyn ... gosh your postcards are just beautiful. I remember the day a lady sent me a handstitched Golly postcard with a stamp on & it arrived in the post ... wow, it certainly made my day, my week actually!! I also love your foundation pieced fantail - they are such lovely birds. Wishing you a great week :-)

Great postcards! Very creative. Glad you got some good photo's of the fast moving fantail! The foundation pieced one is neat, at least it stayed still for the photo!

I love your pohutukawa and fantail!

a great swap card, both yours and the one you received. What a pretty bird, such a long tail and you have that wonderful photo of the tail open. Your block looks fantastic

LOVE your Kiwi postcard, that is beautiful! What an interesting concept. I'd be scared putting one in the mail, but maybe I just need to look these little babies up and see how to make them.

Waht a nice Christmas tree you have in New Zealand. I suppose they will stay outside, or are they in a smaller size, too?
However, you made a lovely card of it, and the one you got back is also very nice!
Your bird is gorgeous, nice fabric you used for it!

both post cards are so pretty. I love the thread painting you both did.
What a fun little bird, both real and fabric.

Oh my!! Love everything about this post!! How fun - postcards!!! Ya'll are just so clever!! Beautiful!! Love ALL the fantails!! Your pieced block is a work of art!! Reminds me of my kiwis!!

I've never made fabric postcards (yet!), yours looks great. And I think you got really good photos of the fantail - I've tried to photograph them before and never quite managed it, they're so busy!

In stitches and seams said...

I feel sew lucky to be the one to receive your first post card. Thank you :)
I also looked up the info on the Pohutakawa on line to saw that you captured the flower perfectly, hard to believe this was your first post card. Maybe one day I will have the chance to see one in bloom for myself...... one can dream right...
in stitches